Fresh from the success of the flagship Cheshire Oaks eco store, Munish Datta, the head of M&S’ sustainability strategy, is thinking smaller… 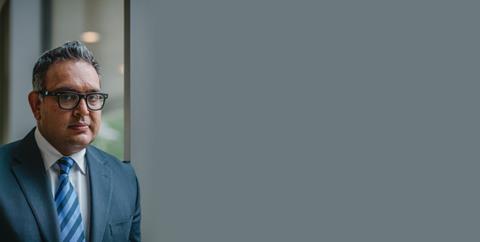 Setting yourself testing targets for anything in life involves a certain degree of risk. But setting targets and then asking an independent company to come in and judge your performance has the potential to spell disaster.
So it must have been with some relief that Munish Datta, the man charged with implementing Marks & Spencer’s (M&S) sustainability strategy for its substantial estate, read consultancy Faithful + Gould’s report on the performance of the retailer’s flagship sustainable store at Cheshire Oaks. The report, which studied the 195,000ft2 building’s sustainability performance a year on from completion, found that it was producing 40% less carbon emissions than comparable M&S stores, against a target of 35%. Other measures such as energy and water consumption are equally impressive.

A confident yet modest man, Datta is clearly proud of his team’s achievements, but he expresses himself in temperate language. “It was very encouraging,” he says. “We thought that we’d get close to those targets, but exceeding them is fantastic.”

But just how did Datta and his team achieve such impressive results? And how replicable are the lessons learned from their experience on the project? 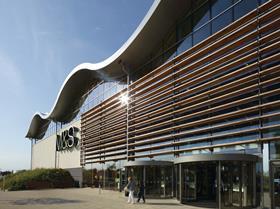 The Cheshire Oaks store is certainly impressive in scale - probably the biggest M&S will ever build, according to Datta. About 1,400m2 of curved glulam beams went into creating the roof structure, 99.5% of which were Forestry Stewardship Council-certified. The roof itself is made from aluminium, 100% of which was recycled. The cladding is a mixture of hemp and lime, known as hemcrete, which has the twin benefit of acting as effective insulation and absorbing CO2, and a “green” or “living” wall fronts onto the car park.

All of which, Datta believes, helped to encourage a change in the store’s workers’ attitude. “You know that you’re going into a green building so you don’t need to put a big poster up,” he says. “Subliminally you think, ‘I’m going to make sure the blinds are down on fridges when they don’t need to be up; I’m going to make sure that the lights are switched off.’ It brings about a different type of behaviour.”

Similarly, Datta says he has been pleased with the reaction of the local community, which he says had “real anxieties” about such a big store landing in their midst. “We thought, we’ve got all that content [about the store’s sustainability] so why don’t we digitise it and make it accessible,” he says.

A mobile-friendly webpage detailing the store’s green credentials and linked to via in-store QR codes registered 40,000 unique hits. “It’s phenomenal and is making us think that people are interested in this stuff, if you present it in the right way.”

Of course, for most clients green building cannot be justified on environmental grounds alone: it has to justify itself from an economic standpoint as well. While Datta won’t disclose how much M&S spent on Cheshire Oaks compared with similar, less environmentally friendly shops, he says the additional spend will ultimately be justified by lower running costs.

“We think that the building has a life of 99 years, but normally for a store like that we would have a 25-year lease and it would pay back significantly well within that period,” he says, adding that with rising energy costs - so much in the news in recent weeks - that payback period is likely to shorten significantly. “As prices continue to rise, the business case for a building like that becomes stronger and stronger and stronger.”

So how has M&S managed to achieve such significant results at Cheshire Oaks? One lesson Datta has drawn is that it is hugely important to monitor performance and address any teething problems as quickly as possible.
“Within quarter one of its use, there were some errors on the biomass system and the rainwater harvesting that allowed us to really trap those early,” he says. “Designers and contractors move onto another project and their minds are elsewhere. So having them shoulder to shoulder with the users while it was still fresh in their minds was massively beneficial to us.”

Datta says that creating a team ethos on the Cheshire Oaks project, from M&S and its architect Aukett Fitzroy Robinson to contractor Simons and the rest of the supply chain, was crucial not just in terms of an efficient build but also in ensuring that companies and individuals were happy to return to the fold as issues were discovered.
“The carrot-and-stick approach used quite generally in the industry doesn’t get the results that it should,” he says. “This is more about a collaborative approach. We said, ‘Right, we know what our aspirations are, so how can we really push it with this store? And if we give you a bit of open licence, we’re willing to invest. So, how can we get to some genuinely industry-leading performance figures?’”

But how transferable are the lessons from Cheshire Oaks? After all, one eco-store does not add up to a sustainable property portfolio. Typically, Datta doesn’t want to overstate the case or make promises that he cannot keep. “A very unique set of circumstances came together to create that store,” he says. “We had a blank canvas and we could create pretty much whatever we wanted. That happens at M&S once every 10 years, where you have complete control over the build from the ground up.”

Of course, Cheshire Oaks was far from the norm. The company was acting as sole client, whereas usually it leases space from an existing owner or developer. “A developer is dealing with all sorts of end users, not just us, who have different requirements and ways of assessing investments,” he says. “Us doing our fit-out is going to get us so far, but working with developers, investors, planners, local authorities, we could achieve so much more.”

The carrot-and - stick approach doesn’t get the results it should. This is more about a collaborative approach.

However, Datta says that some elements of Cheshire Oaks are replicable and are already informing M&S’ property and sustainability strategies. The next round of sustainability trials will focus on Simply Food outlets, as the convenience brand is expanding at a rate of around 20-25 a year, while main stores will be limited to less than 10 a year for the foreseeable future. “We’ve got a very robust Simply Food programme,” he says. “That’s where we’re most energy intense because of the refrigeration, but also because it’s our biggest growth area.”

However, the trials - due to be completed before Christmas ahead of a three-month monitoring period - are taking place in existing stores and are largely aimed at informing M&S’ retrofit programme. The four trial projects involve introducing green walls, 100% LED lighting and a heat recovery system that uses all the wasted heat from refrigeration to heat the ambient atmosphere of the shops. “The numbers of new stores aren’t that significant when you look at our whole estate, so it’s about the existing stores,” he says. “It’s the only show in town and we’ve got to get after it.”

Ultimately, Datta thinks that the real step change in sustainability will be led by the supply chain, not the clients - and wants to appeal to contractors and specialist firms to be proactive in coming up with solutions.
“A lot of our supply base work with a number of retail and non-retail clients and there’s just not enough sharing,” he says. “Those guys are probably best placed to do it. The supply chain, with their expertise, have to say, ‘We’re going to bring to you the things that you could put into your existing estate really quickly.’” 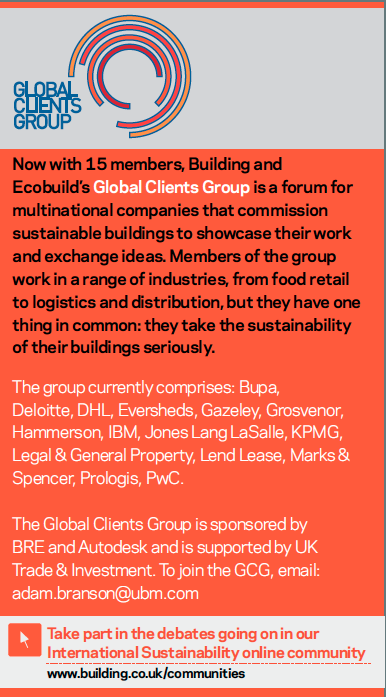