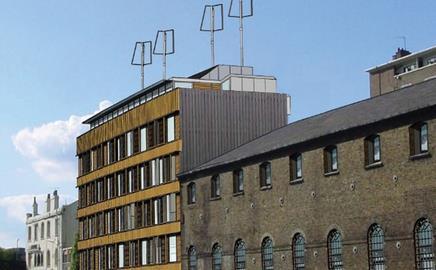 Tradical Hemcrete from Lime Technology has been specified for use on the conversion of a 19th-century foundry into offices. The Baldwin Terrace scheme in Islington, north London, has been designed by Edward Cullinan Architects, which will also occupy it

Tradical Hemcrete will be used on the north and south facades to the office, but in two different applications. The south canal facade is locally listed, along with the existing timber roof trusses, and so it will be applied as an internal lining to the existing brickwork and openings. The north is a new-build facade using the product with Lime Technology’s Baumit external render system.

The render offers a number of desirable characteristics, according to Lime Technology. It has good levels of insulation, airtightness and vapour permeability. The hemp also locks in carbon – 1m2 of Tradical Hemcrete wall can capture and lock in up to 30kg of carbon dioxide.

Produced mainly from renewable sources, Tradical Hemcrete is mixed on site and can be spray applied or cast in situ using a temporary or permanent shuttering system to create the walls.

The £2.1m development is located in a conservation area and aims to exceed the target of achieving 20% energy use from renewable sources.