Much ado about zero

Is zero carbon a lost cause? A roundtable discussion of sustainable construction experts set up by Building investigates if mounting industry fears are justified 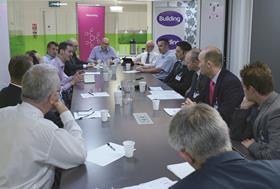 The drive to decarbonise the nation’s new build housing stock was dreamt up in the mid-2000s during the high noon of New Labour. Unlike many of the previous government’s initiatives, the zero carbon standard survives, but in a much diminished state.

The introduction of crucial new Part L Regulations has been delayed, a host of projects look set to be exempt from the standard and even the definition of a zero carbon home has been altered. Concern is mounting that zero carbon is an increasingly lost cause.

To investigate how well founded these worries are in the run-up to next year’s general election, Building recently assembled some of the leading lights in the sustainable construction field for a roundtable, which was sponsored by Celotex.

David Mitchell, technical director of the Home Builders Federation, argued that the very term zero carbon should be looked at afresh. “We won’t be building zero carbon, we’ll be building low carbon or low energy. Perhaps we should change the definition. I would not be selling a zero carbon home as regulations currently stand,” he said. 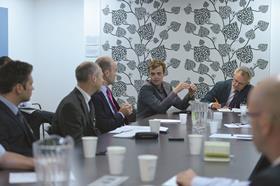 “We have made huge strides as an industry; we just need to modify where we are going in the light of experience and what we now know.”

David Adams, technical director of Willmott Dixon, wasn’t hung up on the term zero carbon. But he argued that it was a useful reminder of the project’s ultimate goal, which is to ensure that new build homes don’t frustrate efforts to meet the UK’s carbon reduction goals. “It [zero] is a nice number because it holds us to something,” he said.

Adams, who used to head the Zero Carbon Hub thinktank, said he “cringed” at the prospect of going back yet again to the drawing board. It wouldn’t even be worthwhile given that the current framework enjoyed a high degree of consensus and any changes were unlikely to be significant.

“Change is really quite disruptive for our business. We would like to land somewhere we can have some stability and really maximise efficiencies without constant changes. 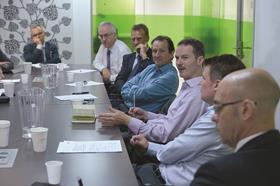 “Leave it up to builders to determine how they market, but don’t let us throw the regulations up in the air again. We just want to know what the standards are going to be. It’s not perfect and will never be perfect, but let’s get on with it because we are spending too much time navel gazing,” he said.

Chris Twinn, formerly of Arup and now running his own consultancy TwinnSustainabilityInnovation, agreed. “This is one of the few things that has survived this government and probably would have been thrown out if it had not had this label.”

Rory Bergin, partner at HTA Architects, argued that the problem wasn’t the zero carbon definition itself but the lack of government leadership on the issue.

“We need government to work harder on defining the road map. At the moment we are on the road somewhere but God only knows what cul-de-sac or lay-by we are in,” he said.

“Part of the problem is the revolving door of the housing minister. We haven’t had anybody who has given this the serious attention it deserves. The industry is paying the price for a lack of seriousness at the highest level: no one has been willing to grasp the nettle.”

Ross Holleron, associate director of the Zero Carbon Hub thinktank, said that there was greater continuity at the level of officials. However, he expressed concern that tweaks to the SAP and Part L Regulations still needed to be consulted on. If this didn’t happen before March, he warned that the changes could be delayed by pre-election purdah, potentially holding up progress for another six months.

And Adams argued that with the fabric energy efficiency standards already in place, the leap from the current Part L Regulations to the 2016 zero carbon standard is achievable. With the use of renewable technologies and allowable solutions, he said they could be achieved.

However, the fundamental worry for eco-enthusiasts like Adams is that in key respects, the government is backtracking on its own zero carbon agenda.

This is most apparent in proposals to lift the requirement to build to the zero carbon standard on small schemes. Barely a week after the roundtable took place, the Conservatives used their annual party conference to extend this easing to homes for first-time buyers.

Baggett defended the proposed small sites relaxation on the grounds that it would benefit smaller housebuilders by providing them with the breathing space they needed to get up to speed with the regulations. 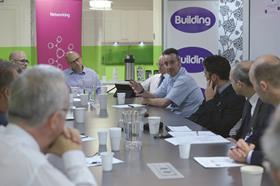 The HBF’s Mitchell agreed: “The small builder will be hit harder by new regulations because he doesn’t have three to four years of developable land and he doesn’t benefit from the bulk discounts of the larger developers.”

Stewart Dalgarno, director of product development at Stewart Milne Homes, suspected that larger housebuilders could use the relaxation as a ploy to get round the 2016 standard. “The definition of small sites is one that bigger boys can use by building a 300 homes site in chunks of 30,” he said.

Bergin could see no technical justifications for exempting small sites. “It’s not as if carbon compliance has much to do with the scale of the development. In my experience, smaller developers tend to build to higher standards than bigger developers because they are targeting groups of people in the local community who will probably want higher performance,” he said.

Applying different standards in the market place would just sow confusion, he warned. “The scenario of having developments on sale on the same street at 2010 and 2016, or even 2002 regulations, is baffling for consumers.”

Twinn’s response to this conundrum was to scrap the legislative framework governing zero carbon housing. He said: “We [the industry] are better at making judgments for what is effective about the future of our industry.”

Adams didn’t go that far but suggested that regulation was a second best solution to persuading consumers to buy into the concept because they value the energy bill savings it leads to.

However prospective purchasers are a long way from this point. Rob Warren, Celotex head of technical, said: “The market is driven by the end consumer and they are still choosing on the basis of bathrooms and kitchens and location: until that changes … it’s going to be really hard to change things.”

Once consumers understood the value of low carbon emissions though, Bergin said that developers could charge extra for features like adding solar photo-voltaic cells on the roof. 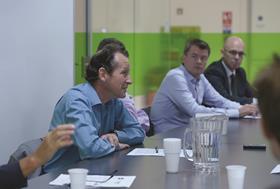 One way of crystallising these benefits is to link them to financial incentives. Just the day before the roundtable took place, the House of Commons Energy and Climate select committee had recommended giving householders council tax discounts in return for measures to improve their properties’ energy efficiency.

Dalgarno agreed: “That council tax discount has a value that creates market traction.”

Despite the slow progress on the zero carbon framework, Twinn said the industry should recognise the strides it had made on minimising emissions.

“To have got this far so fast is an incredible reflection on what this industry is able to do. We are very good in the UK at navel gazing and kicking ourselves when we are ahead of the game.”

Nevertheless, he warned that easing up on the zero carbon drive could store up problems for later when the homes being built today may need to be refurbished to meet more exacting emissions standards. He said: “We are building in a legacy of existing stock which is arguably more difficult to upgrade.”