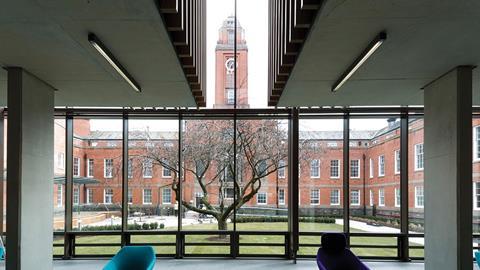 When people think of the south-west Manchester suburb of Trafford they tend to picture of a certain football club. But Trafford has recently revived another locally familiar landmark which, while more modest than its notorious neighbour, cleverly plies its trade on the same restorative combination of heritage and branding.

Trafford Town Hall has been restored and extended in a £26m scheme by architect 5plus. Built by Shepherd Construction, the complex provides 35,000ft² of space in a two-storey extension block. However, a significant part of the scheme included the comprehensive refurbishment of the original town hall building onto which the wing has been attached.

Key characteristics of the original grade II-listed building, such as its existing floor levels and elevational composition, influenced the design of the new block. And while the refurbishment sector is famous for its unknown contingencies and spiralling costs, the town hall was delivered in just 18 months and on a competitive budget.

All this while maintaining a rigorous design approach that skilfully interwove the new fabric into the old.

A bit of history

Stretford Town Hall, as it was originally called, was built in 1932 by the influential Bolton architectural practice Bradshaw Gass & Hope. The practice’s combination of neo-Georgian monumentality and subdued modernist detailing - all of which is on fulsome display at Trafford - went on to become the de-facto civic template for thirties town halls across the country.

The building was built on a horseshoe plan with the centre occupied by an open courtyard. Inside, as with most town halls, the principal space was the first floor council chamber, a domed volume complete with oak panelling and horseshoe seating arranged in the concentric parliamentary fashion. But as 5plus Architects director Paul Norbury explains, the real innovation for the new scheme lay in more mundane spaces.

“When the town hall was originally constructed only one third of the floor-plan was ever built into offices and corridors, the rest was essentially left as open plan to allow modular walls to be inserted between the columns as and when they were needed.”

So, although the idea of future flexibility is often claimed by the modern construction industry as a new invention, it was in fact alive and kicking as far back as the thirties. Accordingly, the town hall’s steel frame construction generally featured columns at 3m or 6m centres into which modular partition walls could be inserted. These dimensions also influenced the proportions of the bays on the elevation.

Norbury reveals that another innovation at the town hall was its combination of steel beams and masonry columns, which at the time led to better structural integrity and thermal performance than steel being deployed on both columns and masonry.

Sadly, later development schemes for the building were not so benign. The council chamber was marred in the seventies by incongruous new seating. But the biggest changes took place in 1983, when the horseshoe courtyard was closed with a new fortress-like four-storey office extension block.

This severed the town hall and the public from the council workers by whom they were served, a civic breach which found architectural expression in the black-tinted eighties limousine-style glazing in which the new block was defensively clad. Bizarrely, an underground nuclear shelter was also constructed under the new building. 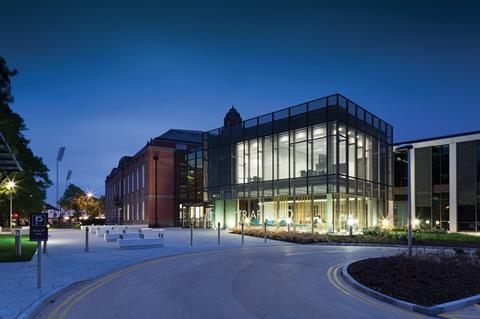 5plus Architects’ new scheme involves the demolition of the eighties block, the building of a new wing to replace it and the complete refurbishment of the thirties main building. Initially the team considered refurbishing the eighties block but eventually rejected the idea on a number of grounds. These included the fact that not one of the levels of its four storeys matched up with any on the original building, its low floor-to-ceiling heights, inefficient cores and the fact that its 18m floorplate made the building too deep for the mixed-mode active chilled beams and natural ventilation strategy eventually installed in the new building.

Trafford council’s chief executive also ruled out refurbishment of the eighties block on public relations grounds: it was deemed as untenable to spend public money on making an unpopular extension to a public building essentially look - at least externally - the same. 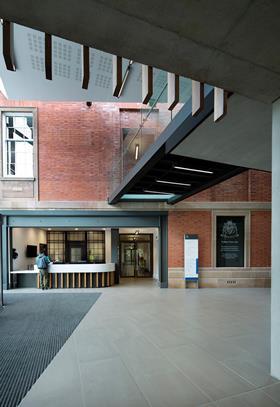 A new public street, complete with cafe, reception and two overhead bridges, separate the new block from the old

But there was one significant piece of the eighties block that was retained and refurbished, its infamous underground nuclear bunker. Its thick concrete walls provide perfect watertight accommodation for the council’s archives. And its 15m width offered ideally dimensioned foundations for the new office wing, constructed to a standardised 15m commercial span, built above it, allowing a considerable cost saving. Also, when the eighties block was demolished, much of its fabric was recycled and reused to make up the 800mm plinth that ensures level access between the ground floor levels of the original town hall and its new extension.

The refurbishment of the original building has involved the careful restoration of features such as panelling, doors and architraves. The council chamber has been upgraded and while there was some controversy over the removal of its original oak seating, some of this has been relocated elsewhere within the building and the chamber also now has disabled access, a rationalised seating plan, upgraded acoustics and a new voting system. Also conference, training and restaurant facilities have been sensitively inserted into the original fabric and its mansard roof has been repaired and fitted with new rooflights.

But the refurbishment cannot be divorced from the new wing. A new double-height atrium acts as a symbolic hinge between the two by providing physical separation between the extension and the original building. Only two glass bridges dramatically spanning the void puncture the original block. With its cafe, reception and generous daylighting, this space has also been conceived by the architects as the “public street and main organiser” of the building, thereby ensuring the transparency and public accessibility denied in the eighties block.

Three “finger” blocks extend perpendicularly from the street which currently provide office accommodation but, as Norbury explains, have also been conceived in homage to the flexibility enshrined in the original building. “Each block has been built on a standard 15m floorplate and separate cores also mean that in the future one or two of them could be easily partitioned off and converted into a hotel or even residential accommodation. This ensures long-term flexibility and considerably increases the future asset value of the development.”

Since the project’s completion in April the town hall has been a big hit with the public. So what does Norbury attribute its success to?

“It’s about creating something simple, efficient and effective out of a low budget and an incredibly complicated brief. By creating a better use of space in the old building, we’ve been able to build less of the new one. Like the original building, that’s a legacy which we hope will last for another hundred years.”