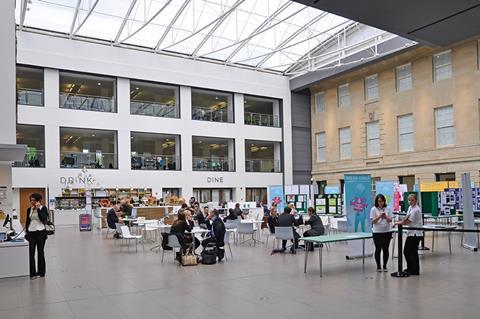 Trowbridge County Hall in Wiltshire has just installed a pioneering type of a raised access floor which acts as a sealed and airtight plenum providing displacement ventilation for a new covered courtyard above. Therefore by utilising the floor structure as an integral component of the ventilation circulation system, this negates the need for the additional plant and ductwork that would otherwise have been required underneath the floor to cool the space above.

Moreover, the floor is entirely pre-fabricated offsite and does not require any wet trades whatsoever in its installation. Before Trowbridge, this particular floor system has been previously used at Land Securities’ Park House office scheme on London’s Oxford Street, the new BBC Broadcasting House redevelopment nearby and the New Court Rothschild’s Bank headquarters in the City of London.

At Trowbridge, the new 1,110m² new floor has been supplied by Anglo-German construction manufacturer Mero-Schmidlin and is a significant part of a £20m refurbishment and new-build project designed by Stride Treglown Architects. The development involved the overhaul of an original thirties civic building and a dour seventies extension to provide 18,600m² of new office accommodation.

As part of the scheme, an open courtyard at the centre of the complex was covered with an ETFE roof to provide a new main entrance space and a library, cafe, social, leisure and community hub, all of which is publicly accessible.

Originally, this open courtyard space was an uneven area with levels varying by up to one metre and a variety of surface treatments. The application of an ETFE roof also turned the space below into what is essentially a giant conservatory whose floor would be required to accommodate the solar gain and physical expansion imposed therein.

Therefore, as Stride Treglown project architect Nicholas Harrison explains, the new floor had to satisfy a number of key design and environmental requirements. “It had to provide new level access over an uneven area, provide displacement ventilation to combat the courtyard’s solar gain and manage the necessary services required by this ventilation efficiently.
“Moreover, the client wanted a rigid, structurally integrated floor that didn’t sound hollow or elevated when walked across and also something that was aesthetically pleasing and consistent with the design of the remainder of the scheme.”

Various raised floor options were initially considered to meet these objectives. Early plans involved laying a new composite plasterboard floor on pedestals but this was eventually abandoned due to concerns over cracking, movement and acoustics. But the Mero-Schmidlin system was eventually chosen because of its ability to meet all of the brief requirements.

The new raised floor structure sits on a series of adjustable height steel pedestals which accommodate the different levels of the existing structure underneath. At Trowbridge the height of the pedestals thereby varies from 750mm to 900mm but the system can accommodate depths as shallow as 20mm. The floor tile panels are then fixed to the pedestal heads to form the courtyard surface. 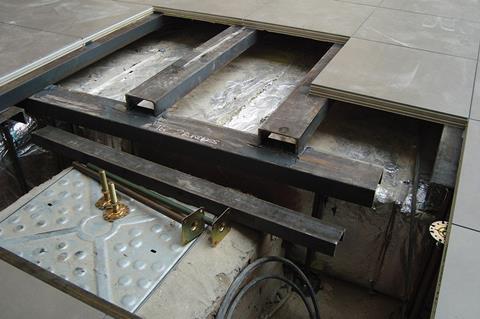 Over ductwork the floor is supported by a steel frame

The floor structure itself was factory assembled prior to installation and is composed of Mero Combi T36 calcium sulphate panels underneath Domus porcelain tiles as the final external finish. Expansion joints of 15mm are also incorporated into the floor construction to accommodate movement caused by solar gain and to avoid the use of conspicuous aluminium extrusions.

In order to ensure that the void underneath the floor works as the airtight plenum required to ventilate the space above, during factory prefabrication oversize porcelain tiles are applied to the underside calcium sulphate panels and then both are machine cut together and bonded with other interlocking panels to eliminate air leakage. During installation, the perimeter of the floor is also sealed to further secure the integrity of the plenum. 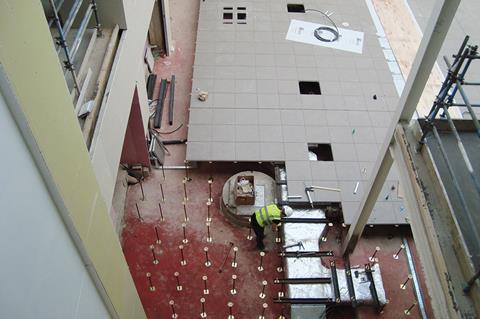 The floor panels during on-site installation

According to Mero-Schmidlin’s Neil Burrows, this factory construction process ensures that the floor is “completely airtight and is able to achieve the kind of exact tolerances and alignment that would be virtually impossible to replicate on-site.”

The plenum works by means of cool air pumped into the 750mm to 900mm void underneath the floor and then released into the courtyard through up to 300 factory-cut air diffuser panels integrated into the floor and through vents discreetly embedded into fixed furniture such as seats and benches.

As Harrison explains “this reduced the amount of visible ventilation grilles required for the floor.”

Burrows is fulsome in identifying the benefits of the system and explaining why it was uniquely suited to satisfy the ventilation requirements demanded at Trowbridge County Offices. “On a conventional raised floor with jointed panels and a neoprene air seal on top of a stringer, it’s incredibly difficult to avoid air leakage through the panels and achieve the kind of sealed air tightness we’ve accomplished here. But because the floor here is factory bonded and sealed, its easily able to carry its role as an air plenum.” 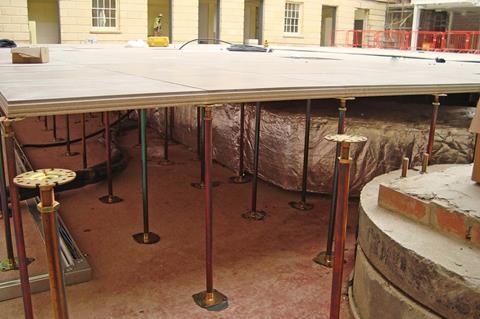 Harrison points out other advantages of the floor system. “With the exception of the 4mm gap grouting it completely avoided wet trades, and offered cost and programme advantages due to speed of assembly and the lack of adhesive required.”

Burrows also points out that the system provides sustainability benefits in the use of environmentally friendly calcium sulphate.

Harrison concurs but reveals one potential weakness which he readily concedes was not a substantial issue at Trowbridge and could be easily addressed on other projects where the system might be used. “Although maintenance access has been provided, the degree of access is relatively limited so as to not compromise the airtightness and due to the bonded composition of the panels. It’s a small consideration and one which is justified at Trowbridge by the excellent performance of the integrated air plenum.”