Offices of the future: Where now for Don Draper?

The office has come a long way since the days of Mad Men, but what could it look like in 10 or 20 years’ time? Well, hot-desking, wellbeing measures and remote working will all flourish. But alas, there’ll be no return of the drinks cabinet 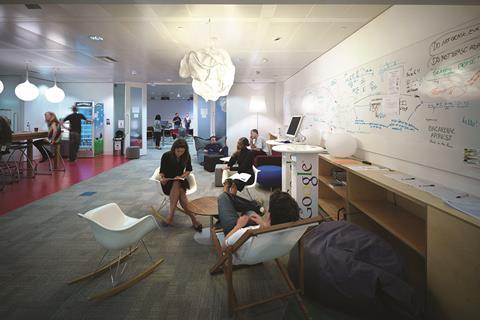 What is the office of the future going to look like? The 1960s envisaged a sci-fi office playscape full of automated gadgetry and robotic coffee machines. The idea of a paperless office first emerged in the 1980s, a decade that also predicted that computers would take over and that video communication would spell the end of all work-related travel.

In the 2000s the future office was a slick and corporate power pad with uber-sophisticated high-tech wizardry such as electrochromic glazing and desktop ambient temperature control. And in our post-recession world today, the idea of the future office has come full circle with the onset of remote working, social media and information technology stripping offices back to their utilitarian cores, with perhaps the odd slide or table tennis table thrown in for good measure.

Of course, as with all predictions, all these fanciful concoctions say far more about the eras from which they emerge than they do about the future. But each proposition conceals at least a kernel of truth that indicates the broader trends and practices that may well influence how we and workplaces will work in the future.

At the recent British Council for Offices (BCO) conference in Amsterdam some speakers speculated that the days of the open-plan office were numbered. But this is just one of a number of emerging theories and trends that have been making significant inroads into the office market in recent years and now form major considerations for landlords, occupiers and designers when it comes to adapting old office spaces or creating new ones. These are explored below in an attempt to define just what the office of tomorrow might be.

In many ways hot-desking has already revolutionised the workplace. For centuries the traditional notion of an office has been based on the idea that individual workers are assigned specific workspaces. But the onset of remote working and internet communication has meant that people could theoretically work from any desk and so the principle of the randomly assigned workspace was born.

According to David Frise, chief executive officer of the Finishes & Interiors Sector (FIS), which lobbies for the interior design sector, the huge expansion of technology has led to a work environment where the traditional desk is now redundant. “If I look at my desk now there’s hardly anything on it. No paper, no filing, no drawers, everything’s on a transportable digital device. I’m not even in the office every day so why do I need the same desk every day?” Nicola Gilllen, practice lead for strategy and interiors at Aecom, puts it even more bluntly: “The traditional idea of an employee being anchored to the same desk is dead. Sharing is here to stay.”

Hot-desking brings many advantages. It encourages greater movement and communication and can represent a more efficient use of space. But it has not been without its problems. Traditional industries have grumbled about its impracticality with regard to team-working and storage and, as yet, there is little evidence that proves conclusively that it fosters the spontaneous collaboration that is identified as one of its key benefits.

A recent report by Step Jockey, which promotes the use of stairs for health, found that hot-desking was contributing to incidents of “lift rage” caused by excessive wait times experienced by people moving between desks and that increased use was leading to carbon emissions from lifts rising by 36%.

All of which explains why Gillen maintains that, while hot-desking is here to stay, it will not do so in the form we see it today. “We haven’t implemented a traditional hot-desking office environment in the last 15 years. It’s now more about grouping teams in one area to create a home base or a neighbourhood where a team will share desks but within a specific area rather than the entire floor or building. This encourages a sense of community and gets away from the impersonality of having an office that is essentially arranged like a hotel.” 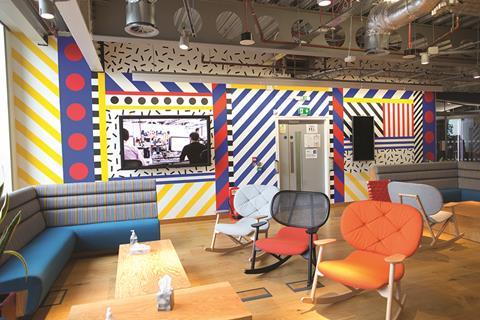 Five years ago most people would have been unfamiliar with the concept of wellbeing other than recognising it as a broad state of lifestyle contentment. Yet today it is one of the driving factors of office design and promises to play a huge role in the office of the future. Matt Webster, head of wellbeing and future-proofing at British Land, foresees three key areas where it will inform the workplace experience that tomorrow’s offices will offer.

“The first will be transparency, providing real-time data on the invisible aspects of wellbeing such as temperature and air quality. The second will be increased attention to the visible, physical aspects of wellbeing design within an office such as spatial layout, colour and window positioning. And the third will be the integration of data in terms of managing the building. This is essentially about creating a smarter office where a centralised management structure makes it easier to use the building and manage issues like predictive maintenance.”

Webster too notes that the fact the office is increasingly becoming less of a physical construct and more a place where productivity can occur anywhere will mean that wellbeing can play a greater role in humanising and domesticating the office environment. “Even elements like natural materials and wider staircases for social interaction can contribute.”

One area where wellbeing is predicted to play a more significant role in office design is health. “Sitting is the new smoking,” observes Frise. “The wellbeing agenda can promote all kinds of aspects that can increase health and mobility such as hot-desking and standing desks.” Gillen reveals that standing desks have been specified by her team for new offices a number of times, revealing the startling statistic that “if we were to stand at our desks for the duration of our working lives it would be the equivalent of running three marathons”. Nevertheless, the health benefits of standing desks have yet to be proven.

While Frise claims that technological material advancements such as “phase change materials, smart glass and high-performance thermal coatings” will all lead to the kind of office environment where wellbeing considerations are paramount, Gillen insists that wellbeing is not just about physical concerns. “It’s about offices implementing a full wellbeing support programme that focuses on improving the quality of the workplace environment. This might even mean offices providing healthy foods like fruit and salads.”

Increased productivity is a key ambition of wellbeing measures and while Frise admits that it is difficult to relate wellbeing directly to productivity, he insists that there will be a “clear benefit to offices of the future in embracing this agenda”. Gillen deploys evidence that could well convince future employers to sign up. “We’ve compiled studies that have shown that there has been an 8% uplift in productivity between an old office that had no recognition of wellbeing methodologies and a new one that did. In the case of this particular office, this meant an additional £20m in revenue.”

There was a time not so long ago when offices were deliberately designed as highly regimented and hierarchical environments in order to provide a physical manifestation of the serious business of work. Today the likes of Facebook and Google have torn up the rulebook and replaced formal with fun. Both companies are famed for their colourful and enthusiastic incorporation of all manner of play devices in their respective new HQs. These range from slides and bean bags to table football and ice cream vendors. Google and Facebook are two of the biggest companies in the world. If their approach trickles down to the rest of the market, can we surmise that the office of the future is going to resemble a children’s playground?

For Gillen, the evolution of this new kind of office environment is principally a cultural development. “Generation X has now reached an age where it’s in the boardroom and for the first time it’s able to dictate its culture and values to the rest of the organisation.” At present at least, there is little evidence to suggest that play increases productivity but Webster too maintains that its evolution is motivated more by culture than economics. “It provides an opportunity to project an all-important company brand and culture that could be effective in attracting the younger generation of employees.”

While Frise suspects the trend may merely be a “fad” and wonders if “anybody actually uses all that stuff”, Gillen counsels that we should be careful not to dismiss the emergence of play in the workplace as a frivolity. “It reflects the socialisation and domestication of the workplace and the fact that work is becoming more like home. Play is fundamentally challenging the notion of what a workplace is.” 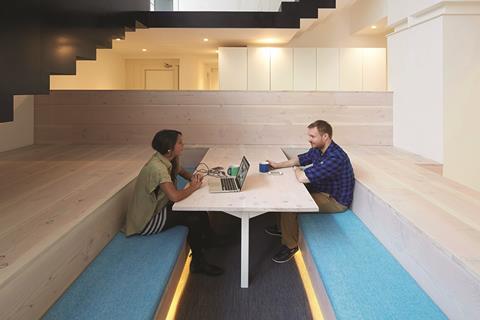 Workplace of the Future, a 2012 report compiled by US networking software company Citrix, predicted that by 2020, 89% of US companies will offer “mobile workstyles”. This is essentially the capability to work from literally anywhere away from a physical office as long as the worker has access to a device connected to the internet. The report predicts that US trends in this direction will eventually be picked up in Europe and elsewhere.

Of course, Citrix is unlikely to predict anything other than the expansion of its core software offer. Even so, its forecast is already borne out by the massive expansion in remote networking technology that has facilitated everything from the explosion of hot-desking to the higher incidence of working from home that we have seen in the office market in recent years. Google, after all, was founded in a garage.

Frise predicts that the pace of change with regard to technology in general and remote working in particular has already seen major changes in how and where work can take place, and will continue to do so. “Work is something you do, not somewhere you go. This has blurred the lines between what we consider work, social and domestic environments. The fact that leisure venues like Soho House now offer work areas is an inevitable full circle from the fact that people have been taking their laptops to work in coffee shops for years.”

If work can now take place anywhere, is this the death knell of the physical office? Gillen is resolute that this will not be the case. “There will always be a need for social interaction. Yes, the days of 5,000 people having to come to work in a building in central London are numbered but one of the key roles of the office of the future will still be a beacon for connecting people. Spontaneous interaction and social serendipity will always be a huge part of wellness and productivity in the workplace.”

Frise, too, warms to the idea of serendipity. “The need for random social connection will always override whatever remote working technology has to offer. Offices will survive because people will always need people.”

Building for the next generation of occupiers will be a session at this year’s Building Live conference. For more information and to book your place go to www.building-live.co.uk