One Brighton: Five years on

One Brighton, the UK’s largest private car-free development, was built as a model for sustainable living. Now, five years on, Ike Ijeh visits to ask whether it has lived up to its green promises 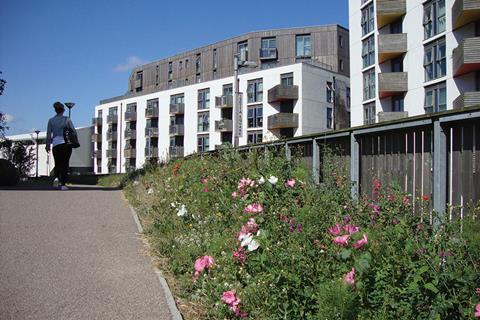 When the One Brighton housing development opened in 2009, it aimed to set a benchmark for sustainable living and design. The 172-unit scheme was the UK’s largest private car-free development. Its construction included Britain’s greenest concrete frame (post-tensioned with 50% cement GGBS replacement, 100% recycled aggregate) and also made use of sustainable construction materials such as natural clay blocks and wood fibre insulation. In order to reduce carbon emissions, extensive use was made of sustainable energy resources such as photovoltaic panels and an on-site biomass boiler, both of which provided around half of the development’s energy requirements with the remainder sourced from “green electricity”.

But One Brighton was about more than just the physical aspects of sustainability; it aimed to promote the kind of sustainable, community-based social lifestyle that would complement the development’s environmentally conscious design. Accordingly, residents were encouraged to grow their own food on a rooftop allotment, extensive recycling facilities were integrated into the buildings’ waste system, a car club was established and a “green” caretaker would oversee management and maintenance.

Designed by architects Feilden Clegg Bradley and built as a joint venture between developers BioRegional Quintain and Crest Nicholson, One Brighton marked an evolution of the low-carbon design and lifestyle philosophy famously pioneered at the landmark BedZED development in south London in 2002. It was also the world’s first One Planet Community, an ambitious global network that aims to create sustainable neighbourhoods from as far afield as Canada to Portugal.

All that was back in 2009. But what of it now? Five years after its opening, BioRegional has published a detailed post-evaluation report that seeks to assess One Brighton’s impact. This provides a timely opportunity to gauge whether One Brighton has actually lived up to its pioneering sustainability agenda.

Have its carbon emissions been as low as expected? How have its sustainable design-features weathered? And, perhaps most importantly, has it fostered the kind of social community in which people are more likely to adopt a low-carbon, sustainable lifestyle?

Community spirit is often the hardest thing to create on a residential development. One Brighton went to considerable lengths to create a robust sense of community with dedicated community facilities like a cafe, offices, allotments and, significantly, public access right through its central courtyard. According to Andrew Breary, One Brighton’s green caretaker, this last aspect in particular has been critical in “preventing vandalism, maintaining security and creating a sense of place”.

Equally, the rooftop allotments have proved hugely popular. Twenty-eight have been provided, and while this was clearly never going to transform One Brighton into the bastion of food self-sufficiency One Planet principles promote, both Breary and BioRegional co-founder Pooran Desai reveal that a far bigger ratio of one allotment for every three properties would probably be needed to satisfy demand. 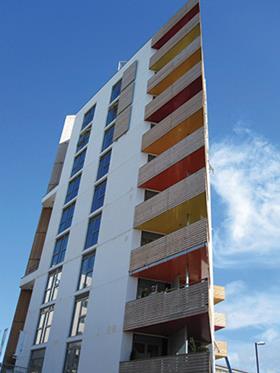 But for One Brighton resident Ruth Anslow, the lack of a strong community spirit is one of the most disappointing aspects of living there. “We hoped [a sense of community] would be there when we moved in but it doesn’t really exist. But this is a wider social issue that will take more than just one development to fix.”

Although Anslow, who co-founded a local eco-supermarket, claims that she lacks the “commitment” to tend to an allotment herself, she admits to “loving” the idea and confirms that they are popular with many of her neighbours.

One possible explanation Desai offers for the relative lack of community spirit is the “transitory residential population” present at One Brighton due to its high proportion of foreign students from local universities.

BioRegional’s report into how One Brighton has performed claims that it has achieved a 67% reduction in carbon emissions when compared with the average UK home. Desai voices his ambition to increase this to 90%. Residents must sign up to purchase energy produced on-site, an arrangement that has caused some consternation on other eco-developments where renewable power is sourced on-site but has led to higher bills. But Desai maintains that when the communal boiler servicing charge is also taken into account, energy costs for residents are around 20% cheaper than the local market would provide. Anslow has her reservations: “We actually thought energy costs would be cheaper but it works out as roughly the same unit cost as we’d probably be paying elsewhere. We were slightly surprised when we moved in though, the letting agent hadn’t previously made us aware of the services standing charge.”

One unexpected problem Desai reveals is an energy surplus. “Because the buildings are using less energy than predicted, the boilers are actually too big. In summer they can use as little as 30% of the total load. In hindsight we’d probably have a boiler half the size. It’s really a question of design optimisation and unfortunately a lot of consulting engineers don’t yet have enough experience of renewable energy to design the most efficient system.”

With climate change leading to higher temperatures and greater legislative emphasis on better insulation and airtightness, overheating looks set to become one of the biggest environmental problems facing British new-build housing. Obviously for a development with environmental aspirations as progressive as One Brighton’s, its potential impact could be particularly damaging.

Luckily, overheating does not appear to be an issue here and both residents and Desai seem happy with how the building is performing. Anslow claims that her flat is “comfortable, spacious and well designed to a high spec, and is not compromised in any way by the development’s environmental agenda.”

One Brighton’s avoidance of overheating is in large part due to its east/west orientation, which may be as a result of the team learning from BedZED’s north/south bearing. Units are also designed with relatively high ceilings and often with exposed concrete soffits. However, Desai does admit that while overheating on the development is not a problem, there are related issues he would address on future projects. “The west facade probably gets hotter than we’d like sometimes, in the future we’d probably apply some kind of solar coating to a facade with the same orientation. That said, the west facade has been designed to accommodate the future installation of shutters, so this well could emerge as a retrofit solution down the line.”

Parking is often the most contentious issue on any residential development. One Brighton developed a novel way to deal with these problems: it simply got rid of parking. And BioRegional’s Desai is unapologetic. “It saves build costs, it saves residents money, it provides more space for apartments, which makes it a more attractive commercial decision, and it encourages more collaborative consumption, such as car sharing and clubs.”

Desai’s advocacy of this position is unsurprising. But while a car-free zone may be appropriate for One Brighton, where Brighton train station is only a four-minute walk away, what of elsewhere? “It’s a question of lifestyle and design, other developments like A2Dominion and Bicester Eco Town have followed One Brighton’s lead,” says Desai.

And what of the residents’ perspective? Anslow is equally positive. “We gave up our car years ago - with the station so close, we just don’t need it.” 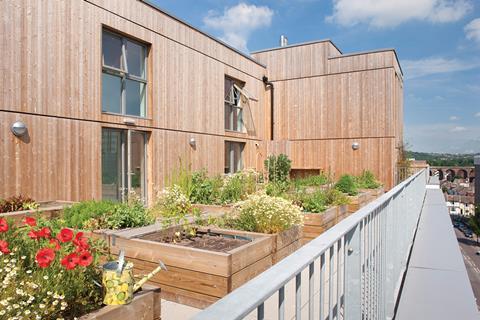 Does this suggest then that car-free developments like One Brighton might only be attractive to those already pursuing a car-free lifestyle? Not according to Brighton & Hove City Council. As their head of planning & public protection Martin Randall explains, in the five years since One Brighton’s completion the council has incorporated many of its features into wider planning policy. “When other developers would come to us and say ‘no, car-free isn’t feasible’, we were able to point to One Brighton as an example of what’s possible. Also, in terms of ultra-low carbon residential developments, it really set the sustainability benchmark we’ve tried to implement elsewhere. For instance, 40% of new housing developments now include food growing facilities.”