Peter Rogers, the ebullient developer behind high-profile London towers such as 22 Bishopsgate, tells Chloë McCulloch about his passion for the industry – which he predicts he will leave only horizontally – and what he thinks it should be doing differently. 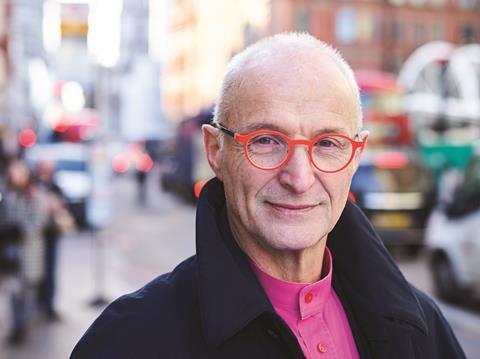 If you want an example of an intelligent client, it’s hard to ignore Peter Rogers, one half of the developer Lipton Rogers, which he co-founded just four years ago with his long-time collaborator Sir Stuart Lipton. The pair have a reputation going back 30 years for being developers with a sense of vision and purpose – most notably during their time at Stanhope – on a par with big names such as Sellar and Canary Wharf.

They are also known for taking on technically difficult projects, the latest being 22 Bishopsgate – the City’s tallest tower and in Rogers’ words a prime example of one of their “distressed” schemes. The previous developer’s plans for the Pinnacle building on this site earned it the unfortunate name of “the Stump” after building work stuttered to a halt with just seven storeys of the core rising out of the ground.

One of the project team on the Lipton Rogers 62-storey tower points to the personal qualities it has taken to make a success of this site, saying: “You have to have the guts, the wisdom to know it will work. Without that it would still be a stump.” Multiplex has already built it up to level 30, with completion due by the end of 2019, and while we reported last week that Lipton Rogers has still to sign any pre-lets, Rogers is confident they will ink their first deal early in the new year.

Rogers, an engineer by training, is known to be passionate about efficiency in the design and construction process, challenging his project teams to find value-for-money solutions. As one consultant says: “He’s very close to the detail, very hands on, he knows the technical detail.”

So there was plenty to discuss with the keynote interviewee for Building’s third annual Building Live conference last week. While Rogers himself did not hide his frustration at construction’s slow pace of modernisation, his love of the industry clearly endures: at the age of 71, when others might contemplate retirement, he says: “I suspect I probably won’t leave till someone takes me out horizontally, I’m afraid.” Below are the highlights from our interview.

“Ideas come from all over the world, and we need to learn from everyone we possibly can – the more open the market is, the more you do that”

Rogers on … Brexit and the market

What are your thoughts on Brexit and the economy?

I have to admit I’m an ardent stayer in Europe, partly because I’m an internationalist and I don’t believe in little groups of people. Bringing Europe together is quite important, not only for the peace of Europe but also for the interchange of ideas. Ideas come from all over the world, and we need to learn from everyone we possibly can – the more open the market is, the more you do that. In the long term, Britain will survive, one way or another, fairly obviously; I’m not a great believer in the “disaster theory”. But it will take time to settle down – investors will find somewhere else to put their money, that’s the danger.

Do you see Chinese developers as a threat?

Challenge is always a great thing. I’m more than happy to see other people come into this country. Property’s a strange market. You’ve actually in a way got to live it, and be part of it, to be able to develop properly. I just wonder how successful they will be as developers within the greater market. But we’re seeing it’s not only the Chinese – Malaysians are bringing a lot of money in, and obviously Battersea’s a big scheme that they’re heavily involved with. So we are seeing quite a lot of new players on the London market.

There’s a pipeline of 400 towers set for London. Do you think that’s too much?

The “400” number worries me because I think a huge amount of that is residential towers and I’m much more concerned about residential use in high-rise. It is much more difficult for a high-rise resi tower to work in the same social way as a denser, more urban, traditional housing model. We’ve seen a lot of problems with tall tower blocks in the past, and that is a worry. But for offices, it’s absolutely the right answer, and we should do more of it, because rather bring people into a central community by train and then focus them in a place, than spread – which then drives you to the out-of-town parks.

You’ve worked with your brother, Richard Rogers, the architect. Do you ever disagree over aspects of design or styles of architecture in general?

That’s probably one of the good things of our relationship: we always disagree. Ever since I was a kid – there’s quite an age gap between us – Richard was nearly a father to me in a way, and I grew up under his architectural interests. So I’ve always been interested in architecture, in design. And obviously being able to challenge him has been great fun. We’ve done some good buildings together as well. But it’s an enjoyable partnership. We’re very friendly, we talk most weeks, one way or another. 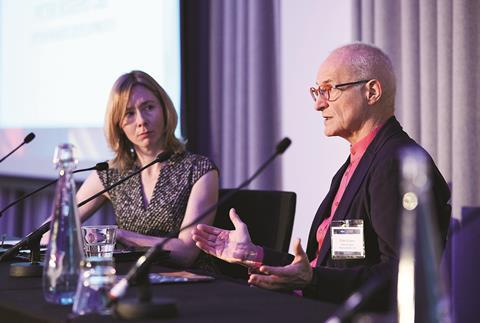 Rogers on … working with Stuart Lipton

Do you and your long-time business partner Sir Stuart Lipton challenge each other? You must clash now and then. How do you make that work?

We do challenge each other a lot. Stuart is very much about planning, concept and visualisation, and he’s highly creative. He’s commercially astute in certain things, but he’s very good at spending money. So part of my job is to try and control that, and keep a balance in the process. Like a lot of good partnerships in business, we’re very different, we challenge each other, and that difference helps balance things out. If you all get on too well together, you risk missing things.

During the Stanhope years, you were credited with introducing lots of innovations, one of which was construction management. You used it for the first phase of 22 Bishopsgate but not the second. What was that experience like, and is there a future for CM?

Therefore we did a bit of a hybrid compromise on 22 [Bishopsgate], where we negotiated all the big packages with contractors that we’d been speaking to practically since the start. In fact one contractor, the cladding contractor – we probably started speaking to them nearly even before we’d put in a bid for the project, because we wanted to try and fix some of the big elements of cost before we bid for it. That allowed us to bring on board the people we wanted, and then at that point Multiplex gave us a lump sum number, which kept the investors happy.

There’s two big issues that worry me about our industry. one is that it’s a minuscule-margin industry […] the other side is skills

… contractors and the supply chain

How do you get the best from your supply chain and what are you looking for from Tier 1 and Tier 2 contractors?

There’s a terrible tendency here to say: I’ve got a building, I’m going to suddenly put a huge team together, and hopefully something will come out of it at the end. If you look at any other product, they’ll spend several years researching the product, building up a team slowly, building prototypes of that product, and then building it. We do the opposite. We pull a large number of people together, and within a year or two we’re on site, trying to build it. So the earlier you can bring the trades in, the earlier you can start looking at products and how they interface, the better.

We also have a tendency to reinvent the wheel in this country, which is one of the reasons why so many building projects get into trouble. One of the things I learnt [when I worked] in America was they tend to build the same thing again and again and again. Not necessarily the outer shell, the aesthetic part of the building, but the interiors are kept very consistent. Here, we try to design everything afresh. And that gives the contractor very little chance of learning on the job. So we get very little refinement.

Why are so many contractors in trouble?

There’s two big issues that worry me about our industry. One is that it’s a minuscule-margin industry. Most contractors make between 1% and 2% – and the banks laugh at me when I tell them this is the sort of returns in the industry. They wouldn’t even get out of bed for that. The other side is skills: we’ve become more and more bureaucratic – the number of contractors that have process managers rather than skilled managers is terrifying.

So that’s a call to go back to some core building skills?

I do worry: the number of graduates that come out of university, put a suit on, go on site and manage something. My poor son suffers because I made him work as a steel fixer whilst he was going to uni, just to understand what it was [like] on site - which is a bloody tough thing to go and do. But boy – does he understand what it means now to put a piece of rebar into a foundation. People are designing massive pieces of steel, not understanding how on earth some poor person at the other end is going to put it in the building.

After the Grenfell Tower disaster the spotlight is on construction – what’s your approach to fire risk, and how does the industry need to change?

It’s a horrendous event. It’s hugely sad that our industry’s allowed it to happen, because there seems to be a fundamental breakdown in common sense in terms of what’s gone on. I used to have a terrible reputation for wandering around with a box of matches in my pocket – this is going back 30 years – I used to test my own materials. If I didn’t like a material that was being presented to me, I would put a match to it.

I’m very nervous of fire load in buildings. And I always have been. So I’d take a very pragmatic approach to this. Yes, we have very good consultants, and if you get a good fire engineer, they know their stuff and they will deal with it.

But common sense: I think that Grenfell will show that, in large quantities, too much has passed from person to person to person. And at the end of the day, you lose sight of what the end object is in what you’re doing. I get very nervous as to why certain combinations of materials are put into buildings. I’m no expert on materials. But common sense tells you that certain things simply shouldn’t be incorporated in buildings.

What is your proudest career achievement so far?

In terms of buildings, probably Broadgate [in the 1980s], because it was such a big project at the time, it was built incredibly quickly. Maggie Thatcher came and did the ground-breaking, and because of the speed that we were doing the building she said, well if you can really build a building in a year, I’ll come and open it for you, so long as you do it in a year. And we did, and she came and opened it for us as well. So it was a seminal building. [As an industry] we’re now building slower than we did, which is a huge pity.