The big, the beautiful and the bonkers - Ike Ijeh and Thomas Lane dish out the awards to an international array of projects that helped keep construction headlines lively in 2010 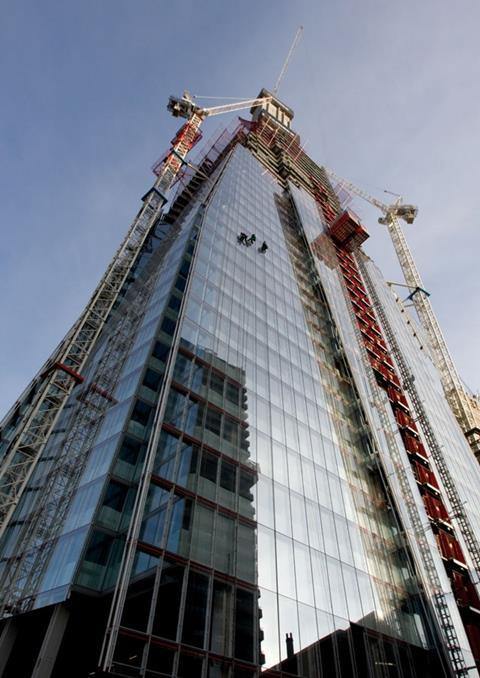 Renzo Piano’s Shard became the UK’s tallest building in November, and it’s got another 75m to go. It’s also the only significant commercial project under construction in the UK, but the less said about that the better …

Now the bottom third is fully clad, you get a good idea of how it is going to look. Forget those visualisations showing a delicate, transparent shape politely nibbling at the London skyline, this is a very big beast. It dwarfs everything around it. The Gherkin and Tower 42 are modest by comparison.

Use of an innovative form of construction enabled the core to be built upwards before the base was finished. Given the state of the property market, you wonder what the rush is. The letting agent, appointed in November, is going to rack up a huge phone bill trying to offload nearly 600,000ft2 of office space.

Still, Sellar will be able to draw some comfort from the kudos of being the developer of what is soon to be Europe’s tallest building. 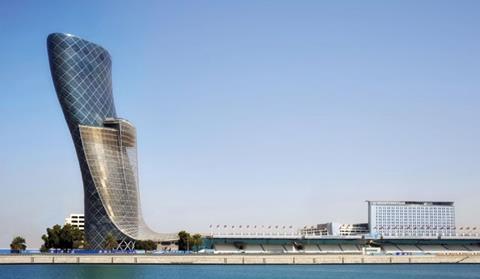 Move over, Leaning Tower of Pisa. In June, a brash pretender from Abu Dhabi called Capital Gate pushed the Italian landmark into second place for the coveted title of the “world’s furthest leaning man-made tower” in the Guinness Book of Records. Capital Gate leans by a gravity-defying 18º, trouncing the Renaissance building’s piffling 4º.

Apart from angle and age, the key difference between the two buildings is that Capital Gate was designed (by RMJM) to lean over. A deliberate 18º incline might sound daft but is seen as normal in a land of fantasy buildings. The client, Abu Dhabi National Exhibitions Company, wanted a chest-beating display of technical prowess to draw attention to the rather more mundane exhibition hall below. There is also some architectural guff about the building looking as if it was shaped by the prevailing winds.

Its pre-stressed core helps it cope with the extreme forces generated by the lean. There is also rather more structural steelwork than is normal for a tall building, plus a big atrium at the top that helps keep the loads down where the lean is most acute.

The downside of having your building stuffed full of structure and voids is that there isn’t much floorspace - some areas of the building are only fit for storing cardboard boxes.
But hey, it set a new record, so what the heck … 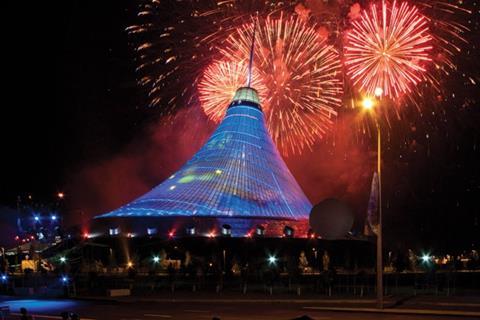 When the opening of a building in an oil-soaked central Asian republic coincides with the 70th birthday of the country’s wealthy president, you can guarantee a big party. So the July opening of the Foster + Partners-designed Khan Shatyr in Kazakhstan was attended by the presidents of neighbouring countries and the world’s press was flown in for the occasion. Entertainment included songs from Italian tenor Andrea Bocelli, lavish displays of traditional horse-riding skills, folk music and an explosive fireworks show.

Thankfully, the building was more than up to all this attention. At 100,000m2, it can probably claim to be the world’s largest tent - leaving the 80,000m2 Millennium Dome looking like a village fete marquee. The ETFE-clad edifice (structural and m&e engineering by Buro Happold) is 150m high and supported by a single tripod in the centre.

Like the Dome, Khan Shatyr houses a cheesy theme park. Astana, where it is located, shivers in -40ºC and is thousands of miles from the sea. So why not give locals a beach experience complete with water lapping up against real sand, palm trees and sun loungers? Slot machines, dodgems and a monorail are alternative attractions…

Judging from the crowds on opening day this building differs from the Millennium Dome in one important respect - the locals loved it.

Now we’ve lost the 2018 World Cup bid, the Olympics is the only game in town. Enjoy it while it lasts because the Olympic park is racing towards completion. The athletes’ village will complete in early 2012, and Bovis Lend Lease has already started to talk redundancies. Olympic Delivery Authority chief executive David Higgins is leaving too, to take the helm at Network Rail.

Hopkins Architects’ velodrome (above right) is the current star of the show as it will be the first venue to be finished. The roof is done, the wooden track is complete, the timber cladding is on, and it should be wrapped up early next year.

It will also be the most elegant and cleverly engineered building on the park - it has a similarly shaped roof to Zaha Hadid’s aquatics centre but only 100 tonnes of steel is needed to hold it up, compared with 3,500 tonnes for the swimming complex.

The latter building is also coming on well, with the roof finished, work progressing on the temporary stands, and tiling on the pool under way. At the main stadium the seats are going in, and the basketball venue, by SKM with Wilkinson Eyre Architects and KSS Architects, is now shrink-wrapped in a shiny white PVC coat (top left). The landscaping work is pulling together all the buildings and gives a sense that this might just transform down-at-heel east London into something vibrant and new. 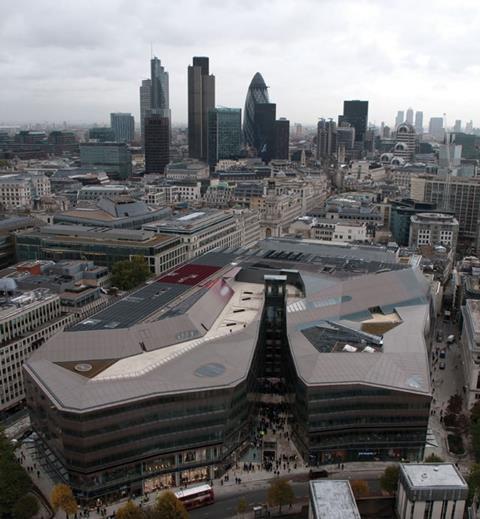 A post-war Punch cartoon proposed an ingenious resolution to the heated debate over what to build in the bomb-damaged area around St Paul’s: a dozen exact replicas of the cathedral. No such deference from Jean Nouvel, whose controversial One New Change, a £450m office block in the shadow of the cathedral, opened in October. Not only is this Nouvel’s first UK building, it also contains the City of London’s first major shopping centre and marks its determination to transform the social fabric of a part of the capital usually left deserted when office workers go home. Another first is the provision of London’s only dedicated roof-top public space.

But One New Change didn’t hit the headlines for these milestones so much as its architecture, which survived a covert attack from Prince Charles. Nouvel describes his work as a “stealth bomber”, a reference to the way it slipped beneath the invisible bubble protecting views of St Paul’s. But in all other respects the building, a hulking brown glass bauble squashed into a deformed prism, maintains a provocative relationship with its historic context. 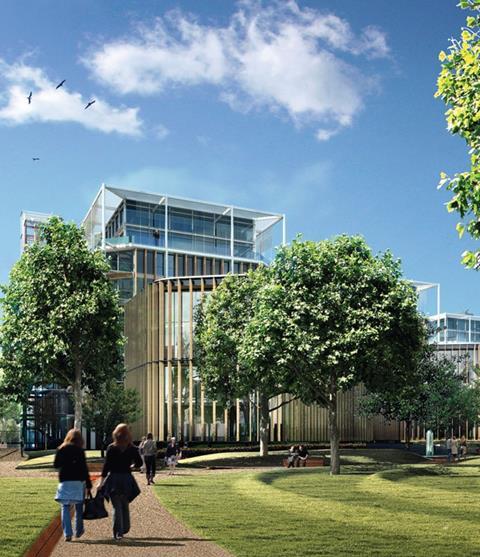 Again this year, Chelsea Barracks dominated the headlines without a single brick being laid. In June, a High Court judge threw fuel on the already raging fire by concluding that the Prince of Wales’ notorious intervention was “unwelcome”. Cue more verbal salvoes between the RIBA, the architectural establishment, traditionalists and planners. Behind the scenes, however, Dixon Jones, Kim Wilkie and Squire & Partners have been quietly working on a new masterplan, which will be revealed to no doubt forensic scrutiny next year.

Meanwhile, an unrepentant Prince Charles provoked more architectural indignation when his Foundation for the Built Environment made a bid to assume the design advisory role presumed up for grabs by the withdrawal of Cabe’s funding.

What will eventually be built at Chelsea Barracks is still far from clear. What is certain is that, love him or loathe him, Prince Charles is likely to remain a force in British architecture for the foreseeable future. 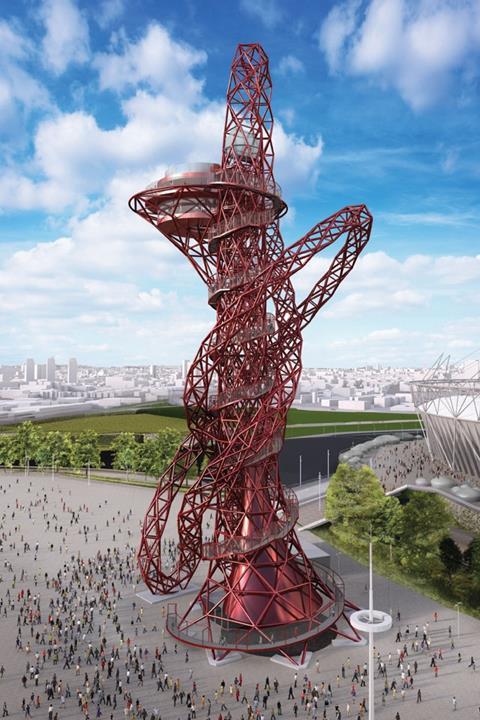 Within minutes of its unveiling by a beaming London mayor Boris Johnson in March, Anish Kapoor’s design for this mammoth sculpture unleashed a wave of publicity in newsrooms, chatrooms, blogs and social networking sites across the country - much of it negative.

It wasn’t just the ArcelorMittal Orbit’s odd name that attracted controversy; it was its appearance. The asymmetrical steel sculpture, which is to be constructed in the Olympic park for the 2012 Games, is a brooding tower of contorted steel surmounted by a precarious-looking public viewing platform.

Primarily funded by steel magnate Lakshmi Mittal, about £3m of the sculpture’s £19m budget was intended to come from the London Development Agency. However, the LDA’s own now uncertain future places that subsidy in doubt.

At a towering 115m - a symbolic 3m higher than St Paul’s - the design immediately drew accusations of ugliness, irrelevance and megalomania.

Whatever your view of the Orbit, it provides a salient reminder that it takes more than money, celebrity designers and publicity to create truly iconic architecture. 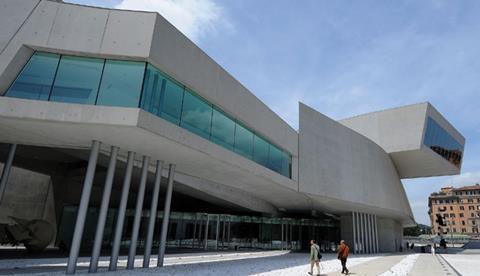 Before this year’s Stirling prizewinner was announced, Zaha Hadid’s career in British architecture was summed up by one word: nearly. Badly bruised by the collapse of her Cardiff Bay Opera House proposals in the nineties and never one to court popularity, she seemed sidelined by the British architectural establishment.

All that is set to change. The stunning Maxxi museum in Rome marks the first time a woman has won the prize independently and is also a statement of intent to her peers back home.
Maxxi (the National Museum of XXI Century Arts) has all the signature flourishes of its designer: swooping geometries, sepulchral forms, plunging voids and contorted spaces. But it infuses these with a kinetic energy that creates an architecture as close to fluid motion as you will ever find.

For many, the basis of gallery design is that the space should be subservient to the exhibits, and some claim this building is too much of a show-off. They miss the point. Firmly grounded in the mannerist and baroque tradition, Maxxi is as much about creating a sensuous, melodramatic work of art as it is about housing them. That is why Hadid thoroughly deserves her prize.