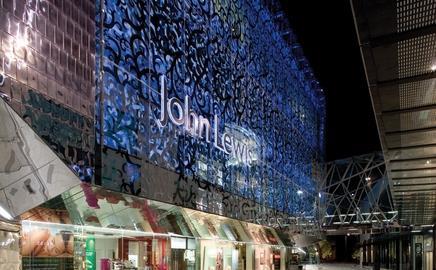 It’s easy amid all the gloom to forget what we’ve achieved as an industry over the past few years. The Building Awards are here to remind you and although you’ll have to wait until April to know who the winners are, we think you’ll enjoy this preview

This year’s Building Awards has brought a bumper crop of entries. Indeed they were so good that we failed to come up with a shortlist of six so this has been extended to eight for each of the project categories.

Building magazine project of the year

This is given to projects completed between September 2007 and November 2008. The ones we’ve picked out are …

One of the visual highlights of 2009, the cladding of John Lewis store in Leicester (pictured, above), designed by Foreign Office Architects, was inspired by a net curtain. It reflects Leicester’s history as a centre for lace and fabric manufacture and allows an unusual amount of light into the retail spaces. This is offset by more than 10,000 shiny stainless steel shingles.

T5 needs no introduction: it is a tremendous engineering achievement. Its single-span roof is a phenomenal 165m long, which allows airport operator BAA maximum future flexibility. The roof was built on the ground and strandjacked into position – a safer and quicker way to build; it also avoided disruption to the airport’s radar system. T5 was also an exemplar for procurement; BAA took all the risk and promoted collaborative working.

The first entire garrison to be built in 100 years, this £552m PFI project consists of 110 individual buildings and accompanying infrastructure. It was a huge construction and logistical challenge that required the military virtues of planning and close teamwork to achieve. The scheme was delivered on budget 21 weeks early.

This commercial scheme for Land Securities hits the sustainability triple bottom line. It covers 1 million ft2 but fits remarkably well with its intimate surroundings, thanks in part to a small square that links it to the surrounding streets. It is also designed to suit the requirements of future users – even the air-conditioning systems can be changed and the building could be partially naturally ventilated. Careful consideration was also given to material selection to minimise their environmental impact.

The mother of all retail schemes was completed last year. Effectively it is a huge shopping mall designed to recreate an urban streetscape, and give Liverpool a new urban quarter.

It breaks the shopping mall mould by recreating an urban streetscape. Twenty-two architects designed the building so as to maintain variety and interest. There’s a park, hotel and waterside residential development too.

This new HQ for fashion retailer Monsoon features an exciting diagrid concrete structure clearly visible in the finished product from both inside and outside. As its name suggests, bright yellow bands are used on the cladding and the building features a sawtooth roof giving the impression that the office is the modern equivalent of a factory.

This elegant postgrad medical school and cancer institute was built on the foundations and basement of the original building and the new materials have been used as efficiently as possible. Flexible spaces ensure the building will have a long life and the terracotta brises soleil not only cut energy use but help relate the building to its surroundings.

This highly original building is the product of the vision of its end user, the Leicester Theatre trust, and client Leicester council. It’s been dubbed an “inside out” theatre as five huge sliding steel shutters allow passersby in the street to see past the foyer, into the auditorium and the workshops beyond. The whole building has been designed around this idea of transparency.

Housing project of the year

It might not look like it, but this striking scheme introduces the traditional family terraced house back into the inner city. The family homes are arranged over four floors with car parking at the front and a patio at the back and first floor terrace above this. The scheme is also the first in the UK to use moulded polyester concrete for the cladding.

Badged as the ultimate egalitarian development, social, key worker and private housing is mixed up with no visible differentiation between tenure types. The building is distinguished by its colourful balconies and timber cladding which, unusually for a housing scheme, was prefabricated. It’s green too with a BREEAM Excellent rating and devices to minimise water use.

This attractive scheme spearheads the regeneration of this brownfield site in Brighton near the railway station. There are 247 homes, a supermarket and office units – plus, the streets are virtually car free.

Located on the eastern fringe of the City of London, this regeneration scheme has 294 apartments arranged around a courtyard featuring a large water garden. The development looks crisp and modern, and is offset by a Grade 11-listed block that has been converted into flats.

This is Pocket Living’s first housing development and it provides quality private housing to key workers for 25% less than local market prices. The scheme is a modern interpretation of a classic brick street but with generous windows and efficient use of internal space.

A smart reinvention of the classic Birmingham landmark. Urban splash has turned this rotund, sixties office building into apartments. One of the biggest challenges was replacing the old cladding. Because the building is Grade 11 listed the new cladding had to echo the original while being more themally efficient and providing better views for residents.

A genuinely mixed-use scheme, it incorporates housing, primary care and community centres, plus a shop and cafe. The flats are mostly clad in Siberian larch which has been arranged to give the facade a textured look.

As its name suggests, glass has been extensively used for the cladding of this mixed-use scheme. It features distinctive oval-shaped, glass-clad access stairs. Timber and render have also been used on the apartments.

Public building of the year

This building’s users wanted studios that maximised internal space with plenty of natural light and this impressive scheme is the result. It has been constructed with solid, prefabricated panels clad externally in standing seam zinc. This, together with the natural lighting, means the scheme has a low environmental impact.

Defra has put its money where its mouth is with this low carbon regional HQ. It features recyled and low environmental impact materials, three wind turbines and PV panels, plus a biomass boiler. It achieved a BREEAM score of 80.72% – one of the highest ever.

Another pioneering integration of public services, the Eltham centre brings together swimming pools and fitness facilities, a community college, a library, a crèche and a Citizens Advice Bureau.

This is Foster’s biggest academy to date and the scale is managed by arranging the building into six V-shaped wings with a large central social space sitting under a dramatic, undulating roof. This unifies the whole building and is made from glass, steel and acoustic panels.

Billed as a new breed of civic building, it incorporates council offices, police station, public library and CCTV control centre in one high street building. The design is intended to foster interaction between public and building workers plus interaction between internal departments.

This comprehensive renewal of St Martin-in-the-Fields in Trafalgar Square included conservation work on the church and reorganisation of spaces both below and above ground. The project was technically and logistically challenging as much of the work was carried out below ground, and the church is located in a very tight urban site next to one of London’s busiest squares.

This oncology wing focuses on creating a pleasant environment for those patients using it. Natural daylight and ventilation is maximised in the wards, while corridors are lit from the sides to stop patients on trolleys being dazzled by ceiling lights.

This building is immediately recognisable due to the strongly linear bands of colourful terracotta tiles. These vary in colour from dark blue green to yellow and get progressively lighter towards the top of the building, and brighten up the drab area of London next to the elevated motorway where it is located.

The projects here are a reminder of the hard work the industry has put in over the past few years, and the reason we went into construction in the first place.

If you want to find out what the projects that aren’t pictured here look like, log on to www.building.co.uk/awards09shortlist. If you want to attend the awards ceremony – taking place on 2 April at the Grovenor House Hotel please contact Stuart Dacre on 020-7560 4073 or email stuart.dacre@ubm.com

Original print headline: The Building Awards: at last a reason to celebrate