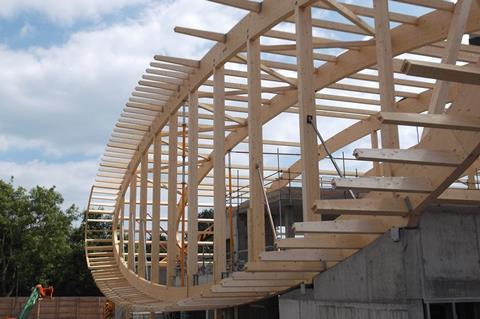 Flyovers and council estates have never been thought of as construction’s most glamorous or pioneering projects. But a new community hub in Portsmouth is aiming to rewrite the rules. Somerstown Central is a £10.8m municipal facility being built in the Somerstown area of the city that has been designed and is being contracted by Bam. When complete next summer, it will contain an array of local amenities including a community centre, youth centre, dance studios, sports hall, health centre, cafe and housing offices.

There are two things that make Somerstown Central Community Hub a bit different. First, its structure comprises an innovative tubular glulam frame, which will be expressed internally throughout the building. Second and rather more significant, the building spans a dual carriageway and acts, to all intents and purposes, as an inhabited flyover.

While an undeniably striking feature, this tubular flyover configuration created a highly complex building structure and imposed critical constraints on the building programme, which is being delivered by contractor Bam.

Although Bam project manager Nick Butler concedes that the new Hub is not a “heavily serviced building” he maintains that it is “an incredibly technically complex structure. There are hardly any vertical walls, the section is always changing and there are constant structural interfaces between multiple types of construction.”

Construction also had to proceed while the dual carriageway was still in use and only one weekend closure was permitted to enable the new beams spanning the highway to be lifted into place. A further two weekend closures were allocated for the assembly of the scaffolding required for the building’s construction.

Despite these logistical challenges, the building spans the roadway for important practical reasons. The dual carriageway and the Community Hub are right in the centre of the Somerstown council estate, a sprawling public housing development built between the fifties and seventies featuring scores of tower blocks and housing over 9,000 residents.

The dual carriageway was constructed during the sixties, partly to aid the evacuation of military personnel from the nearby historic Royal Navy dockyards in the event of a Cold War nuclear attack.

However, the dual carriageway cut the estate in two and this scheme has been conceived to reconnect it once again. The Hub also replaces an elevated plaza that previously straddled the dual carriageway from the nineties onwards and which had become a focus for antisocial behaviour that further divided the estate, already located in one of the most deprived areas in the country. The new Hub is part of an ambitious, council-led regeneration project for the entire neighbourhood. 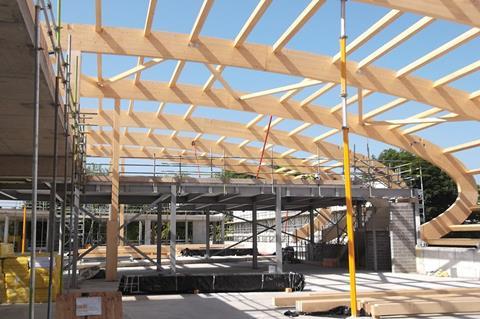 The 90m-long Hub building is two storeys and 18m high, and 30m wide. It comprises a ground-floor concrete frame supporting the first-floor glulam tube. A 5m-high void enclosed by a concrete abutment wall on two sides has been cut at an angle at the centre of the ground floor to enable the dual carriageway to pass through the bottom half of the building. The glulam tube above spans continuously over the carriageway and connects the two entirely separate ground-floor structures.

A mezzanine level has also been inserted into the central section of the upper floor, the only part of the predominantly concrete-frame building that has been constructed from a steel frame. For public access, there will be pedestrian entrances at each end of the building and over the dual carriageway, which replace a proposal originally considered for external walkways.

The structure has been built with robustness firmly in mind. The tubular glulam members of the ground floor provide load-bearing structure for the upper floor, and 300 25m piles form the foundations of the building with 72 piles under the concrete abutment walls that enclose each side of the carriageway underpass alone. At 500mm thick and 4.8m high the abutment walls have been designed to substantial structural Eurocode specifications and to withstand direct vehicle impact.

Designed for such heavy work, the 18 precast pre-tensioned concrete beams that span the underpass between the abutment walls are hefty pieces of masonry. Each 28m-long beam weighs 38 tonnes and was lifted individually into place by crane. Butler describes their delivery and installation as one of the toughest challenges on the job: “We only had one weekend to lay the beams and as this had to be negotiated three months in advance, we had an incredibly tight critical path to ensure that everything was ready in time. This included ensuring the piles for the abutment walls were ready to take the weight of the beams and making sure they were laid within two days of the concrete curing. Missing or miscalculating these deadlines or failing to complete the process within our weekend time-slot would have had huge implications on the rest of the programme and job.”

The beams were delivered by lorry from Ireland with two beams per lorry. Half were laid on the Saturday with the final nine installed the following day and with deliveries intricately staggered throughout the day to ensure that the site and neighbouring roads were not clogged with a backlog of idle lorries. 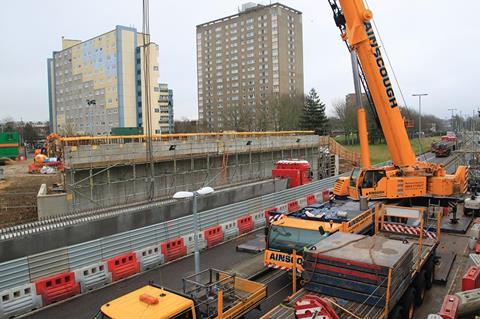 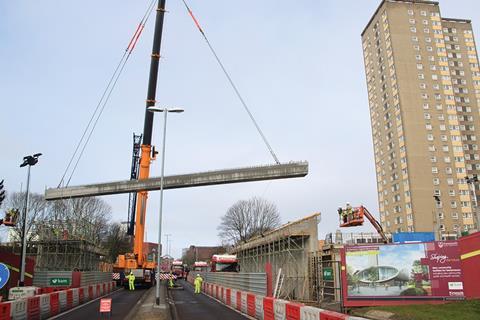 During piling, high-level piles were laid first to stabilise the banking that runs down from the level of the building entrances at each end to the roadway level at the middle. Once these were in place it was time for construction of the ground floor slabs. Different solutions were chosen for each end of the building. At the northern end the slab is ground-bearing but at the southern end it is suspended. This was to protect the trees, foliage and vegetation occupying this part of the site.

The concrete columns were then constructed before the first floor slab was formed. Here too there is variation. While the section of the first floor slab that covers the underpass is constructed from pre-tensioned beams, post-tensioning is deployed on the remainder to allow for the relatively few columns required for a flexible floor layout below.

The tubular glulam frame occupies the upper level of the building. Each curved section is 820mm deep and curves across the full width of the building. The sections were prefabricated by Swiss manufacturer Just Swiss and arrived on site in five separate pieces, which were bolted together into three pieces on site, craned into position and fixed into the concrete frame below.

The bolting mechanism is sophisticated and discreet. Instead of a visible steel plate connecting the timber members, three internal bolts lock the pieces together, invisible to the eye once connected. This is one of the advantages that convinced the design team to opt for timber for the tubular frame section rather than steel, which was originally considered.

As Bam design manager Marek Konas explains, there were other benefits too. “It was more aesthetically appropriate than steel as it was going to be internally exposed, it provided slightly quicker lead-in times, offered environmental benefits via the sustainable forestry that procured it and the system requires virtually no fixing or cutting into place on site.

It arrives with all the holes for services already pre-cut. Some temporary bracing is required but all we essentially do is just fix it together, like a Meccano set or a Swiss watch.”

Surprisingly, with regard to cost, both Konas and Butler maintain that there was “not much difference” between the timber and steel options. The final component of the building structure is to be the Kalzip aluminium standing seam sheeting to be applied to the timber frame as its external finish. This will conceal the entire upper envelope apart from the two glazed curtain wall openings at either end of the tube, some plant protrusions in the roof and a large expanse of structural glazing over the centre of the building, which will correspond with position of the dual carriageway directly below it and admit light into the cafe located directly above the underpass.

Konas elaborates on the building’s complexity. “It would have been very difficult to deliver a building like this on a traditional contract. It was designed using BIM and even though BIM is definitely no silver bullet, it certainly helped with clash detection with all the various structural elements and helped to co-ordinate services too.”

Perhaps most importantly, the project seems also to have won approval from the locals. Butler sums up local reaction by describing a message recently relayed to him by a resident. “He said it’s been such fun watching the building go up that he’d like us to take it down and start again.”

Given the difficulty of the job, Butler is unlikely to agree to that. 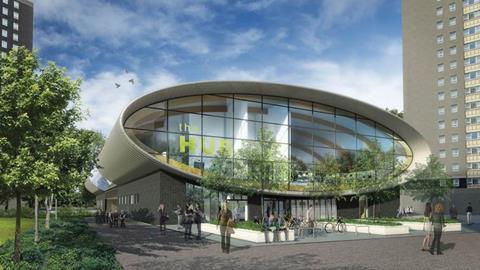 A computer-generated image of the completed building 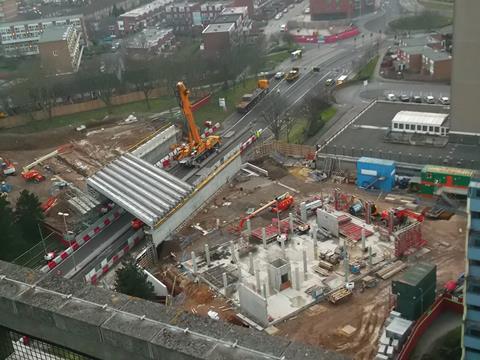 February 2013: The beams spanning the dual carriageway are laid between the abutment walls 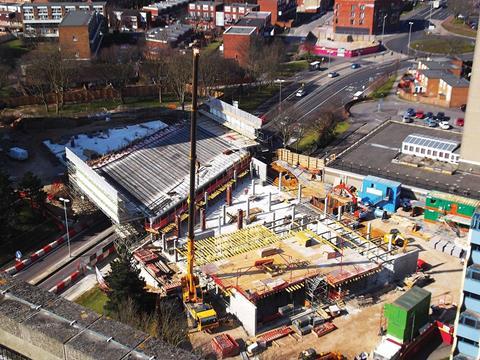 March 2013: The ground-floor slab and columns are laid on either side of the abutment walls 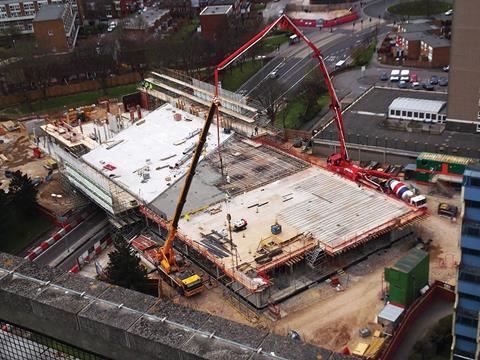 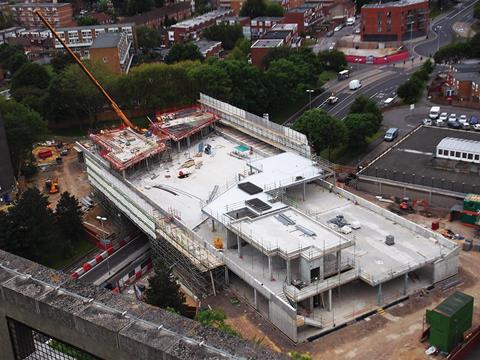 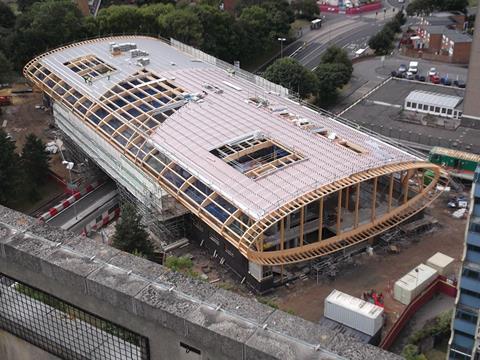 July 2013: The glulam tube is formed above the first floor slab 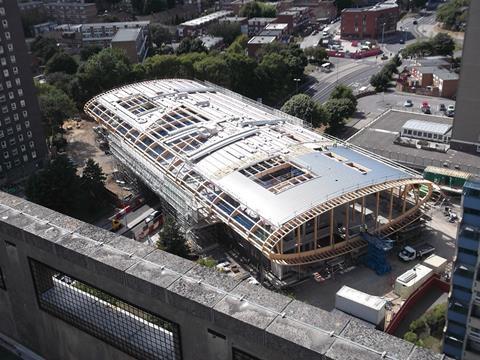 August 2013: The aluminium standing seam Kalzip roof is clad onto the glulam frame