Piped seagull cries. Surf-capable waves. Artificial volcano spewing synthetic lava. If these are your must-haves for a successful summer trip, check out Ike Ijeh’s Handy Holidaymaker’s Guide to Indoor Beaches of the World 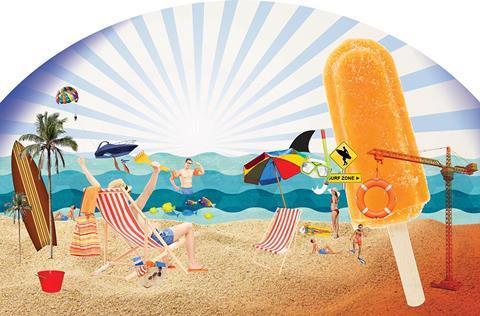 ‘In Xanadu did Kubla Khan a stately pleasure-dome decree.” So goes the opening line of Samuel Taylor Coleridge’s poem about the mythical summer palace of the infamous 13th-century Mongol emperor. Sadly, beyond Coleridge’s unfinished, opium-induced musings, nobody is certain what exactly was inside Khan’s legendary citadel. But we can be fairly sure of one thing: it probably didn’t have an indoor beach.

Not so for the global leisure resorts detailed below. Depending on your point of view, the concept of an indoor beach is either one of two things: an inspired commercial venture providing a genuinely innovative holiday alternative; or a tacky recreational paradox that sounds like a sinister splicing of Dragon’s Den and The Truman Show.

Ridicule aside, indoor beaches are presumably here to stay and from the scale of some of the projects below, they would appear to appeal to a significant contingent of the international tourist market. In just two weeks’ time, the largest building in the world will officially open in China, containing an entire indoor seaside resort complete with, as only the Chinese would ever attempt, its very own artificial sun.

So, as the summer holidays hit their stride and hordes jet off in search of crashing waves and luscious sunsets, spare a thought for those of us packing not sunglasses and sun-tan lotion but rather non-slip sandals and a handy copy of a Fire Escape Route Map. 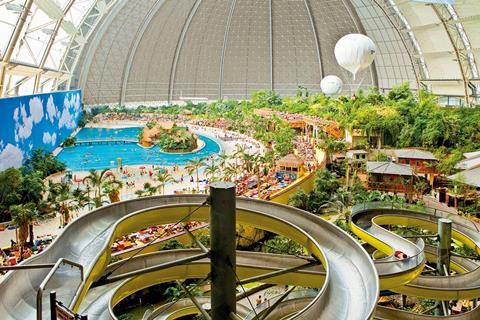 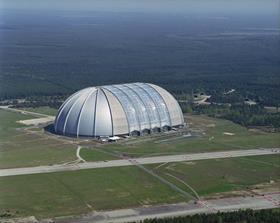 The German countryside might seem an unlikely location for one of the world’s biggest indoor beaches. But perched in a frequently snow-capped clearing deep in a thick Brandenburg forest lies a defiant Teutonic riposte to the hedonistic indoor beach enclaves of Asia and the New World. The Tropical Islands Indoor Resort must be one of the most bizarre entries in the albeit consistently curious world of international indoor beaches. Built as a airfield in 1938 and maintained by the Soviets throughout the Cold War, the site was bought by an airship manufacturer after reunification. They proceeded to build what is now the biggest free-standing hall in the world, a vast 360m x 210m x 107m-high domed hanger that looks like a genetically modified hybrid of Crystal Palace and the Hindenberg. Unfortunately the airship venture was short-lived and bankruptcy forced a sale to an international joint venture. In a devastating display of German efficiency aided in no small degree by Malaysian enterprise, within just 10 months the site was converted into one of the biggest indoor theme parks in the world.

The resort is divided into several areas, the largest of which, the Tropical Sea, contains a 200m-long artificial beach and maintains a constant temperature of 28ºC. But that is where the artificial seafront simulation stops; no slick Japanese LED sky screens or digital seagull audio sequences here, just scores of artificial palm trees, endless rows of sun-loungers and a vast printed plastic screen of blue skies and clouds that wouldn’t look entirely out of place at your local branch of PC World. None of which is enough to suppress the constant presence of the exposed hanger rooftop structure, an unsettling militaristic incursion to an otherwise perfectly unconvincing piece of vapid sub-tropical scenography. Only one word sums up this lamentable charade: surreal. 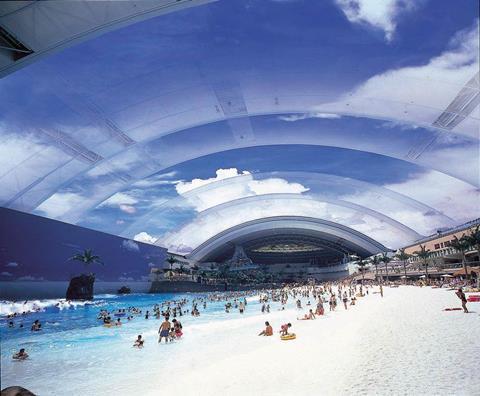 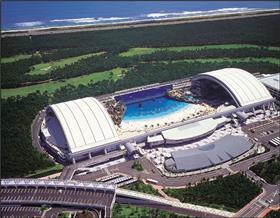 Quite why holidaymakers might want to be reminded of their country’s innate capacity for natural disaster is a mystery, but even lewd geological pantomime fails to conceal the Ocean Dome’s star attraction. Soaring 38m above the beach, its giant retractable roof can be opened to allow genuine sunlight to flood in whenever the weather allows. But even when conditions are inclement, the roof’s soffit is equipped with a gargantuan virtual-reality screen across its full 100m breadth so that when the structure is closed, soothing images of cloudless blue skies can be projected onto the pliant sun-seekers below.

There was just one small problem. The Ocean Dome is just 300m away from an actual beach and real ocean. The Japanese have nothing to prove when it comes to technological appreciation but it did not take long before even they were struggling to devise plausible reasons to visit a simulated beach located within breaststroke distance of a real one. Eventually visitors dwindled and, in 2007, the venue closed indefinitely. The Ocean Dome serves as a warning to all those canny entrepreneurs who might muse over the commercial potential of indoor beaches. In a country with the fifth-longest coastline in the world and in which nowhere is ever more than 90 miles from the sea, they might not be a very good idea. 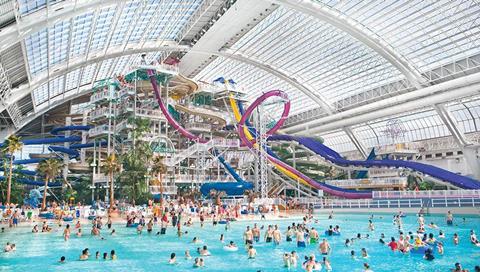 It may surprise you to learn that the biggest and oldest indoor beach in North America is not actually in the fun-loving US but in the allegedly more staid and serious confines of Canada. World Waterpark is part of West Edmonton Mall, which, at three times the size of Westfield Stratford City, is the largest shopping centre in North America (another unlikely snub to the neighbours across the border). World Waterpark offers a prodigious array of record-breaking water-borne attractions including the world’s largest indoor wave pool and the world’s second-largest indoor waterpark after Krausnick. And of course it contains the obligatory vast artificial indoor beach. However, unlike many of its international contemporaries, World Waterpark appears to be a commercial success, possibly because its marketing strategy and economic fortunes have been anchored to that of the landmark shopping centre it is part of rather than the dubious pleasures of synthetic sand. It also benefits from the economies of scale accrued by targeting the recreational leisure rather than holiday market and, by offering a variety of pleasure pursuits other than the beach, avoids unduly testing the conceptual credulity stretched to breaking point by its peers. 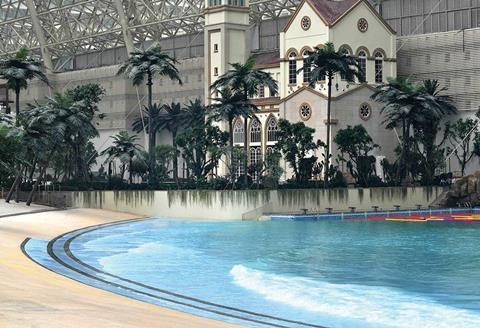 Imagine a single building well over half the size of the City of London and around 30 storeys high. Imagine it filled with 18 million ft² of shops, offices, cinemas, conference centres, restaurants, hotels, a university and, inexplicably, a shipwrecked pirate ship and a full-scale replica of a small Mediterranean village. But its centrepiece is even more illusionary, a sprawling 400m-long, 5,000m² indoor beach complete with the world’s biggest LED screen (150x40m) on which to simulate digital sunsets.

There’s more - to contend with Chengdu’s inconvenient yet chronic smog problem, an artificial sun utilises specialist Japanese lighting technology to emit pollution-free heat and artificial daylight 24 hours a day and create a permanent seaside atmosphere. For those still unconvinced by this maritime masquerade, the beach has sand flown in from Hawaii, is complemented by a restaurant -lined seafront promenade able to accommodate up to 6,000 visitors, is equipped with air conditioning that expels bracing sea breezes and incorporates an audio system that plays anything from the squawk of a seagull to the horn of a distant ship.

In a country that has recreated entire English villages and Venetian canals, such heroic levels of artifice are hardly surprising. Moreover, Chendgu is around 1,000km from the sea, so oceanic accoutrements of this kind naturally assume a more exotic allure than one might expect. But even with these caveats, the New Century Global Centre is an astounding enterprise. It may have officially opened this month in 2013, but its hallucinogenic excess and euphoria places it firmly in the mind-bending counter -culture of the sixties. All its beach is missing in fact is a yellow submarine. 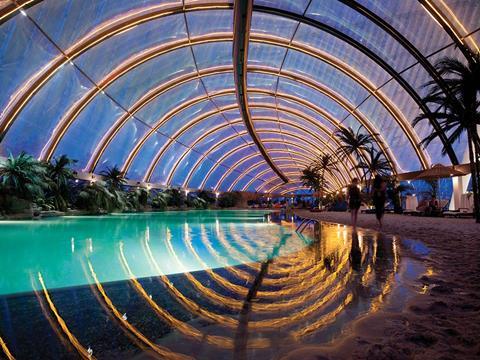 If anywhere on earth has an excuse for building an indoor beach it’s Kazakhstan. The former Soviet republic is the largest landlocked country in the world and its capital, Astana, is an incredible 3,000 miles away from the nearest continental coast. Although temperatures reach a balmy 40ºC in the summer, they plummet to a terrifying -40ºC in the winter.

Add to this a booming economy, billions of gallons of oil, an expanding middle class and a growing consumer market and it was only a matter of time before millions of cubic feet of sand were flown in from the Maldives. (None of that synthetic stuff here!)

Kazakhstan’s indoor beach is located within the Khan Shatyr Entertainment Centre, a huge leisure and retail complex designed by our own Norman Foster and submerged beneath a soaring, 90m-high ETFE tent structure. Just to make things even more challenging, the beach and its associated pools are actually on the very top floor and housed within a secondary ETFE enclosure to provide insulation as well as sunlight in the unforgiving winter months.

It is Kazakhstan’s harsh climate, as well as its history of savage Soviet oppression and currently somewhat elastic attitude towards human rights that makes it difficult to pour scorn on the Khan Shatyr venture, from a users’ perspective at least. If the embattled inhabitants at the centre of the world’s biggest land mass don’t deserve a simulated seaside then nobody does. 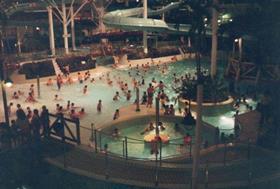 In the interests of editorial equanimity, it is important to point out that what was briefly the UK’s largest local leisure centre never claimed to have an indoor beach. But what this abortive aquatic aberration did have was the kind of cataclysmic health and safety record that made building the Hoover Dam seem like running a bath. Croydon Water Palace opened in a blaze of publicity in 1990, its owners Croydon council boldly seeking to emulate the runaway success of Blackpool’s Sandcastle Water Park (Europe’s first indoor water park), which had opened four years earlier. The ambitious south London equivalent proudly sported an abundance of amphibious leisure attractions including water slides, wave machines, whirlpools, flumes and Jacuzzis. But it was not long before lurid tales of accidents and accusations of chronic health and safety malfeasance began to circulate in the local press.

Visitors increasingly complained of unlockable changing rooms, loose and slippery floor tiles and the charmless ritual of having to navigate slumped fellow patrons smoking idly by the poolside. Several near-death experiences were reported in the direct vicinity of the wave machine and one of the Jacuzzis was alleged to have almost claimed a victim by trapping her hair in an overly rambunctious suction valve. Eventually, stung by sustained financial difficulties and mounting public derision the centre closed after just six years. It is now the site of the Purley Way Colonnades Leisure and Retail Park, a blander, though presumably far safer, exercise in suburban self-gratification.

There are many morals to the ill-fated tale of Croydon Water Palace. We British are now perhaps far better at visiting leisure resorts than building them. The part-privatisation of local leisure services has not been entirely without merit. And a haircut might be advisable before your next trip to a Jacuzzi.