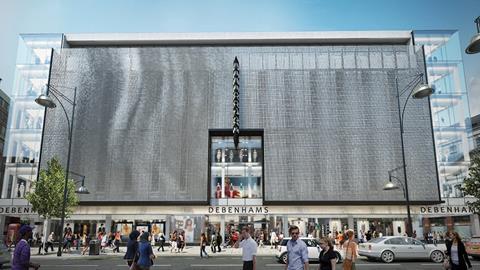 With almost a quarter of a billion visitors every year, London’s Oxford Street is Europe’s busiest shopping street and one of the most famous retail destinations in the world. Although most of its harassed shoppers barely have the time to look up, if they did they would be met with a superb compendium of British retail architecture over the past 150 years. However, when it comes to architectural quality, there are one or two exceptions to the rule and one of the most prominent offenders is Debenhams’ flagship department store.

Designed by Adrian V Montagu and Partners and completed in 1971, the seven-storey block has been described as “big and dispiriting” and Oxford Street’s “ugly duckling”. But all that is set to change with the installation of a cladding system that will transform the dour concrete facade into a dazzling aluminium veil.

The cladding will be part of a £40m store makeover that will include an atrium, canopy, signage, extended shop windows and complete internal refurbishment. But it is undoubtedly the distinctive cladding that will make the biggest external impact.

Designed by Archial Architects in conjunction with US-based environmental artist Ned Khan, the cladding screen has been conceived as a “kinetic facade” comprised of 185,000 suspended aluminium shingles that will ripple gently in the wind. It will be the first cladding system of its kind in the UK.

Archial project architect Jaime Livingston describes the key challenge of the project as “creating an art installation that could be developed into a commercial enterprise” and he likens the effect of the moving panels to a video display. “Visually it won’t be about the individual panels moving, it will be more a series of unified shimmers vibrating across the whole building, like pixels on a screen. Also, as the shingles will reflect the sky, it will be one of the few buildings in the country that will actually look better when it’s windy or raining.”

He also adds: “Right at the start of the project we knew we wanted to cover the building with some kind of simple but bespoke over-cladding but at first it was more of a hard veil. It was Ned Khan that devised the idea of some kind of decorative, kinetic pattern.”

The shingles that will form this pattern will be suspended within a steel structural cladding frame. This will project 840mm from the face of the existing pre-cast reinforced Reema concrete panels that currently comprise the building’s facade. Although the cladding system will not require routine maintenance, the 840mm gap will allow maintenance access if required.

The construction and setting out of this cladding frame has been determined by the composition and proportions of the existing elevations. This even extends to the use of the imperial measuring system for the new cladding structure in order to more accurately match the pre-decimalisation dimensions of the facade behind it.

The existing elevations have a series of narrow four-storey-high windows bays that extend across the full envelope of the building above ground floor. The cladding frame will be connected to the building’s main structure by a series of cantilevered steel posts projecting through the vertical window bays on the store’s second and fourth floors. The posts will be concealed by the existing deep window reveals and the new cladding superstructure will have no impact on the internal structure or arrangement of the building. This will enable refurbishment inside the store to proceed unimpeded by the external cladding works.

The cantilevered support posts will then be attached to an 18m-high grid frame of vertical steel T-sections set out at five feet centres. Each bay created between the T-sections will contain rails of 10 suspended shingles at six-inch centres and with a one-inch gap between them.

The shingles themselves will measure five inches by five inches square and they are set slightly forward of the structural frame at 1.1m from the existing concrete face. They will be made from natural anodised aluminium and perforated to reduce their weight, surface area, noise and glare. Their range of movement has already been tested extensively in wind tunnel simulations performed at the BRE and in Stuttgart.

The edge reveals that extend across the full length and width of each elevation are treated differently. These will be visible at the corners of the building and under the ground floor canopy. Here, a decorative lace-like pattern has been embossed into aluminium panels in homage to Debenhams’ drapery roots. The final component of new cladding installation will be fully integrated lighting, which will illuminate and further animate the building at night. 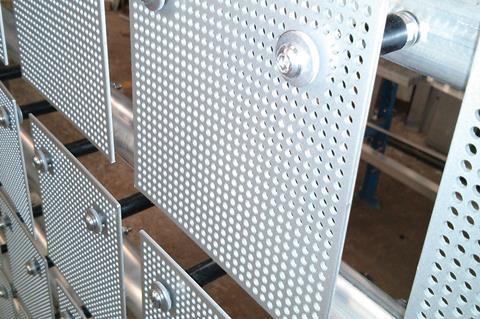 Mock-ups of the aluminium shingles (above) and the perforated, decorative cladding edge trim (below) have been constructed. 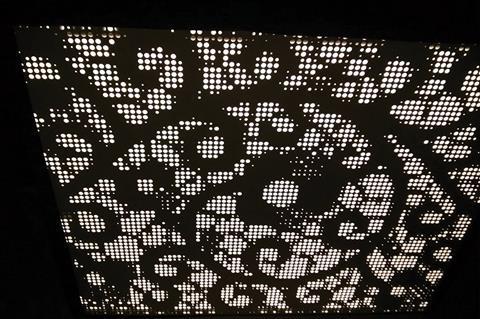 Livingston describes the shimmering surface soon to be applied to the store as an “abstract visual concept that resembles a jewellery box or sequinned dress which, along with the cladding’s neutral tones and simple black and silver colours, again pays homage to Debenhams’ branding and roots.”

Impressively, the shingles do not just occupy the principal Oxford Street facade but all four sides of the store expanding over 3,000m². As Livingston explains: “One of the interesting things about the existing building is that there is no elevational hierarchy, no back and front, all sides are treated equally. We were perplexed as to where the service entrance was until we realised it was in a completely different building on the other side of the road and connected to the store via an underground tunnel!

“We felt it appropriate to employ the new cladding across the building’s full envelope in order to reflect this lack of hierarchy and increase the building’s role as an urban landmark from various vantage points and not just along Oxford Street”.

The cladding will also be semi-permeable, allowing obscured, oblique views to the original frontage beyond. Livingston points out that this “allowed the vertical rhythm of the existing facade to be vaguely perceptible behind the more abstract composition of the shingles. This also enhances the effect of a metal veil wrapped around the building.”

Debenhams’ new cladding provides a technically practical yet artistically inspired means to overhaul the image of a dull and dated sixties block. By the time the cladding is complete next February, Oxford Street’s “ugly duckling” should have sprouted ruffling aluminium feathers and a shimmering, resplendent new skin. 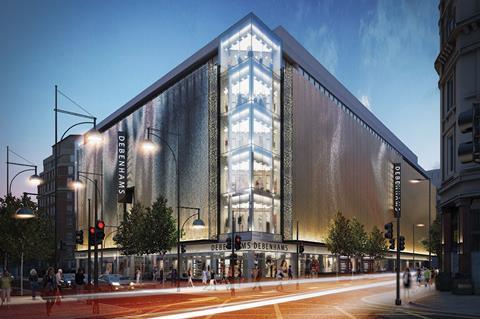