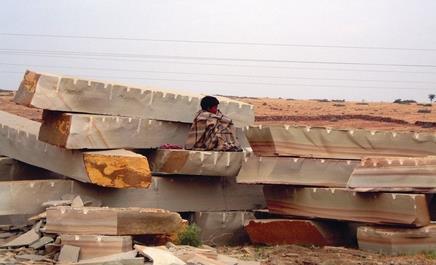 Children as young as six are working 12-hour days in some of India’s sandstone quarries. Yet many UK stone importers just don’t want to know about it. Sophie Griffiths reports on a scandal that is getting harder to ignore

Five years ago, a director of products supplier Marshalls happened on a report produced by the India Committee of the Netherlands, an organisation that aims to raise Western awareness of deprived groups in the Subcontinent. It listed details of how sandstone was quarried, in particular the widespread use of child labour. As part of a company that annually imports a large quantity of stone from India, Chris Harrop was startled. He set out to Rajasthan in north-west India, to investigate the conditions of workers in the quarries his company sourced its stone from. What he saw left him shaken.

“I needed to see for myself how endemic child labour was in these quarries,” he says. “I hired a guide, and we drove for two hours down dusty dry dirt roads into a quarry. Nobody was expecting us, so it was easy to just stop the car and walk around.

“There were two young boys in front of me wearing flip-flops, operating a jack-hammer. I later discovered that they were 13 and 15 years old. Their parents were working in another quarry. In the next quarry, there were tens of small children working on the spoil heaps. There were two girls that we spoke to – they were aged eight and 11, which was the same age as my two girls back home. That’s when it really hit home.”

Five years on, Marshalls has put in place measures to ensure children are not exploited in its quarries. But other organisations have been slower to follow suit. The Stone Federation Great Britain has some 200 members. Of these, about 40 are estimated to import stone from India, but just seven have signed up to the Ethical Trading Initiative (ETI), a set of principles about child labour drawn up by the International Labour Organisation.

The lack of pressure, predictably, means conditions in India have not improved. In January, Harrop returned to check up on the quarries used by Marshalls. Travelling through, he passed a number of other quarries. In one, he saw a nine-year-old child splitting stone with a sledgehammer. On another, a small girl sat atop a spoil heap, making stones.

“We’re playing catch-up with the food and fashion industry,” says Julia Hawkins, of the ETI. “People just aren’t asking the questions of their supply chains that they need to be.”

The issue, however, is becoming harder for British firms to ignore. In January, an early day motion was put forward by MP Jim Sheridan calling on firms to stop importing natural sandstone produced using child labour. It has now been signed by 58 MPs. Stone Federation Great Britain is due to release a report urging companies not to use quarries in which child labour and bonded labour is used.

Meanwhile, thanks to the recession, more British firms are working in the Indian construction market, aided by the launch of UK Trade & Investment’s British–India Roads Group in February. As such, the potential for British firms to come into contact with materials created through child labour is rising. Harrop says: “We can’t allow this to happen.”

The extent of the problem

So, what products are being produced by child labour and where are they used? Child rights activists estimate there are about 60 million child labourers in India; Anti-Slavery International says up to a million of these, some as young as six, work in India’s stone quarries – which means they make up about 20% of all quarry workers. About 5% of the quarried sandstone is exported, with a large chunk going to western Europe and America. Just 1% ends up in the UK, but this still constitutes about 250,000 tonnes of sandstone a year.

UK firms began sourcing Indian sandstone as a replacement for British York stone, which was used in pavements and paving slabs for many cities, including in Trafalgar Square in London. As York stone became increasingly scarce, its price rocketed, and companies began to look elsewhere for similar, cheaper options. Indian sandstone can be bought for about half the price of the English equivalent. Much of the sandstone comes from Kota, a district in Rajasthan. Many families in the region work in quarries, cutting and working stone that, according to a report by Marshalls, is largely destined for the UK. Most quarry labourers earn 120 rupees (£1.79) a day, although there is no guarantee that any worker will get the minimum wage or be adequately equipped for the job.

Sandstone is not the only stone excavated in India. Limestone and granite are also quarried extensively and according to the Mineral Products Association, they are widely used in the construction of buildings and roads in India. This is a point of particular concern, following the creation of the British-India Roads Group. India has identified more than 80,000km of highways and expressways that need expanding or building. Private sector founder members of the group include companies such as Balfour Beatty, Vinci, Arup and Aggregate Industries.

So why are children working in these quarries? “Often the families are simply so poor that they need their children to work to put food in their mouths,” says Harrop. “But you can’t simply raise the wages and assume that will solve the problem. We tried that, but the children still came to the quarries with the parents because there was no school and someone had to look after them. They ended up working to help out their parents, but this time for no pay because we had insisted on no child labour.”

The other situation is bonded labour – a system of forced or partly forced labour in which a person borrows money from their employer and then works to pay off their debt. If they do not succeed, the debt can be inherited by their children, who are essentially born into slavery. Despite bonded labour being abolished in 1976, it is believed that about 90% of workers in Indian quarries are forced to work to pay off debts.

Children are predominantly involved in the making of “cobles” – small brick-shaped stones created from waste on the spoil heap, which comprise about 15% of the total stone product. Girls and smaller children in particular are used to make these, as the process involves less physical strength.

In rural areas, there are also many illegal quarries which Marshalls claims operate recklessly and pollute the landscape. At these quarries, Harrop witnessed young boys and men working in open sandals, with no gloves, no ear protection and no eye protection. All around, abandoned spoil heaps leave a devastated landscape, he says.

“Firms need to see the quarries with their own eyes.” Chris Harrop of Marshalls saw two boys this age operating a pneumatic drill

So what can firms do to combat the problem? Since 2007, Marshalls has funded the work of an NGO called Hadoti Hast Shlip Sansthanthat helps to improve the lives of vulnerable families working in the quarries around Kota and the region of Bundi. In conjunction with the NGO it runs four free schools and six free health centres. It also regularly visits the quarries to ensure standards are being met. Another company, Pavestone, has funded a regional doctor and teacher and helped to establish a healthcare scheme that it says is open to all quarry employees.

Members of the ETI must submit annual reports to the ETI board, setting out the steps they are taking to tackle working conditions in their supply chains. These reports are examined by NGOs and trade union members, and the ETI says it has disciplinary procedures for those that fail to comply. However, by its own admission, the ETI is not a regulatory body, and no checks are carried out on the how materials bought by UK companies are produced.

One apparent solution would be to simply avoid sourcing stone from India, but Harrop is at pains to stress the damage this would cause. Bilateral trade between the UK and India is worth more than £12bn a year. The money spent by British stone companies is hugely beneficial to the Indian economy, and Harrop is keen to stress that firms should set up a boycott. “That would be disastrous,” he warns. “The money just needs to be spent properly. Trade can be a powerful weapon for good, but if we abuse it, it can have appalling consequences.” It would also, of course, increase the costs of UK projects.

Harrop says the only way to be truly sure that child labour is not being used is for companies to visit, unannounced, every quarry they purchase from, and not to rely on mere promises from suppliers. “Firms need to see the quarries with their own eyes,” he says. “They need to be prepared to regularly turn up at any time, and employ local help. You need to have local knowledge on the ground, you have to be enquiring; ask lots of questions.”

But even that is not always enough. When questioned by Building, the owner of one UK-based stone importer insisted he had personally been to India to check on the quarries he used. However, when pressed, he admitted he had not visited all his quarries and that he bought a percentage of his stone from a middle man. “As far as I’m aware, it’s ethically sourced, but I don’t actually know,” he confessed, before adding: “It’s not my job to go out and check. I’d have to be out there all the time. I use 16 quarries – they’re all over India.”

But Harrop disagrees. “We can’t just turn a blind eye to this,” he says. “If you’re selling a product in the UK, it’s your responsibility to know where it has come from. It is your job.”

13% of the world’s children are working

A child factory worker works an average 12 hours a day

An estimated 200,000 children are employed in the sandstone industry in India

The UK imports about 250,000 tonnes of sandstone from India for use in driveways, patios and pavements

One in five quarry workers in India are children