What to specify: Residential

This week’s residential products include timber sliding sash windows for Alain de Botton’s A House in Essex project, and an external wall insulation that better suits the Georgian and Victorian brickwork often found in northern cities 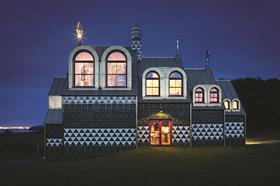 Traditional timber sliding sash windows, casements and French doorsets from the Conservation range by Mumford & Wood were specified for A House for Essex as part of Alain de Botton’s series of rentable holiday homes. The products were chosen to complement the existing individual design. The made-to-order timber Conservation products featured Victorian-style sash windows, with spring balance operation, which were adorned with fixed curved semi-circular fanlights. All products were finished in purple red, RAL 3004, with a single doorset supplied in yellow. Conservation windows and doors are made from engineered timber.
Mumford & Wood
www.mumfordwood.com

Alutec has launched a number of new sizes within its flush-fit range of downpipes in response to customer demand for greater variety. Designed to offer options for a range of properties, the additions build on existing 76mm circular and 72mm x 72mm square options. Options now include a 63mm circular design. 102mm circular and 102mm x 76mm and 102mm x 102mm square varieties. Available in 21 standard colours, the flush-fit downpipes are compatible with Alutec’s Evolve and Aligator aluminium guttering systems and are manufactured from marine-grade aluminium.
Alutec
www.marleyalutec.co.uk 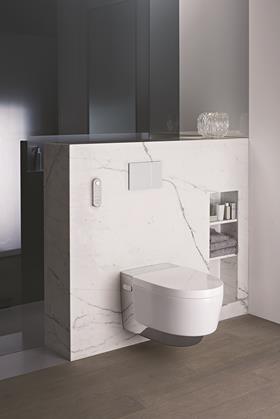 Geberit has launched a new shower toilet system called AquaClean Mera. The product features a proximity sensor enabling the WC lid to open and the seat to warm automatically on approach. The system has two nozzles to provide a targeted clean with water at body temperature, and a drying function, with the airflow temperature gradually reducing as the skin is dried. AquaClean Mera is operated with a remote control, which has four storable user profiles to suit individual cleaning and drying preferences.
Geberit
www.geberit-aquaclean.co.uk

CD UK, the UK distributor of solid surface material DuPont Corian, has launched a range of seven sinks featuring a stainless steel base. The company said the metal base made the product suitable for use with hot containers and boiling water taps. The sinks are made with 12mm-thick Corian walls with double-sided reinforcing strips to maximise strength where the material is jointed. The sinks include a sound elimination coating and built-in overflow. The seven sinks are available in a range of sizes and shapes and three variations of white as stock. The company said it was planning further additions to the range later this year.
CD UK
www.cdukltd.co.uk

Saint-Gobain Weber has introduced a new colour to its brick-effect finish external wall insulation (EWI) system. The “Georgian red” colour was added in response to customer demand for a match to the facades of Victorian and Georgian brick-built properties in the north of England. The product has been piloted on the upgrade of more than 70 properties including some owned by Rotherham council, as the local planners wanted to preserve the original construction style.
Saint-Gobain Weber
www.netweber.co.uk 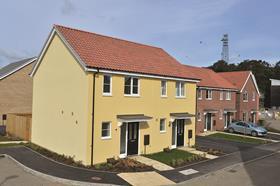 Redland’s Fenland Pantile roof tiles were selected for two large-scale housing projects in Beaufort and Middleton Park. The tiles were chosen because they matched the roofs in the surrounding areas. Redland developed the Fenland Pantile specifically for the South-east and East Anglican markets, which the company understands to favour particular roofing styles. The single pantile shape provides a modern interlocking concrete format, which the company says is weathertight in most weather conditions.
Redland
www.redland.co.uk