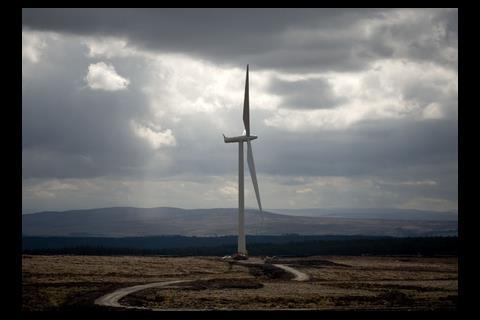 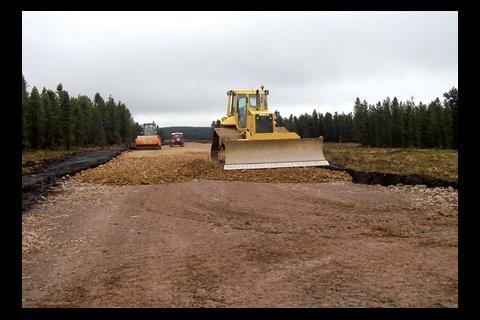 Building nearly 90km of roads through forest has been a big job. 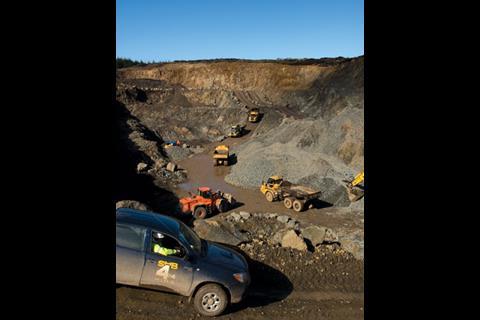 Decent roads are needed so the turbine components can be brought in on low loaders weighing up to 130 tonnes. 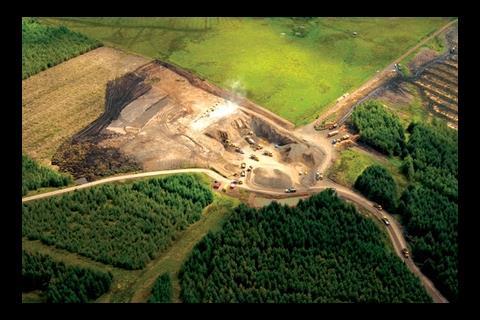 The 1.5 million m3 of rock needed for the roads and turbine foundations has been quarried from six borrow pits. These will be reinstated at the end of the job. 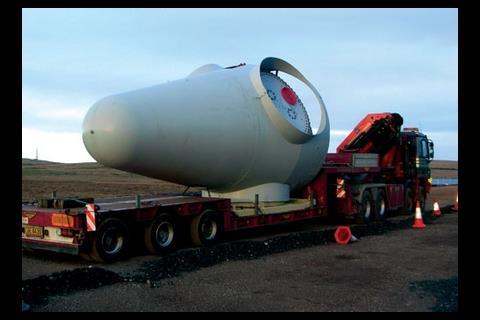 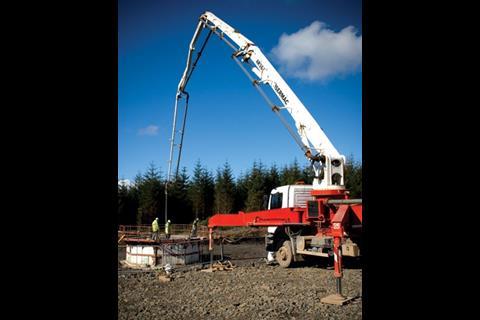 The concrete is being pumped into the pedestal shuttering. 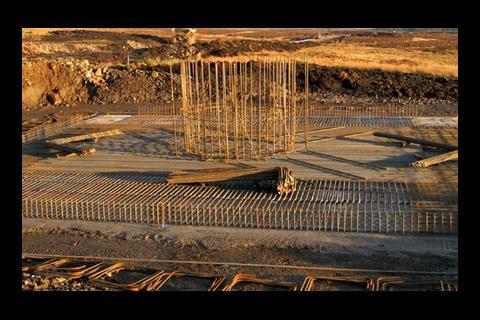 A large hole is dug for the turbine foundation and the base filled in with crushed rock. The reinforced concrete base is cast, and finally a pedestal for the turbine to sit on. 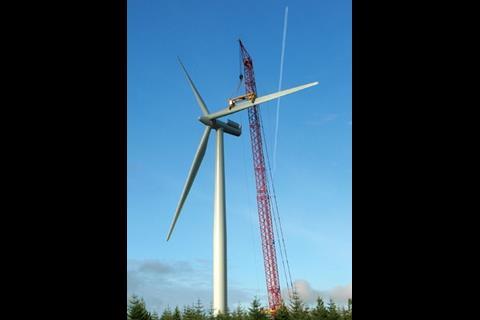 A 500-tonne crane is needed to erect the turbines. Ironically, wind can be a problem as work has to stop if the wind is too strong. 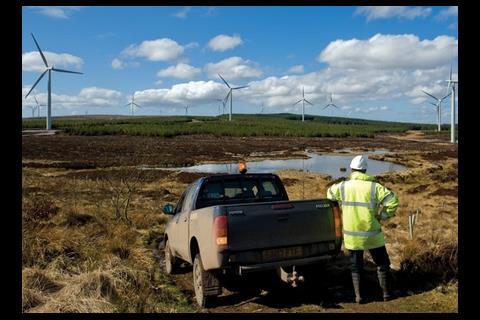 The first array of turbines is finished and is supplying the grid. 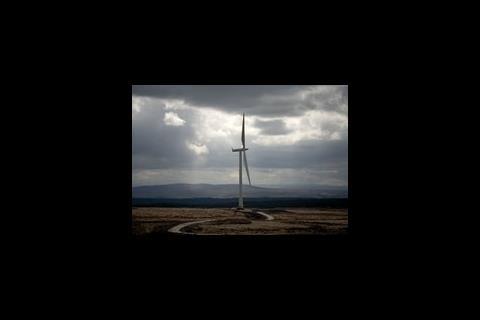 You might think the biggest difficulty in building a wind farm would be the wind itself, but on the moor outside Glasgow the rain, snow and liquid peat are just as bad. Thomas Lane donned his souwester to take a look at the construction of Europe’s largest onshore wind farm.

‘It can be fine here but we can be pulling people out at the other end of the job because it’s foggy, and visibility is down to 20m,” says Anthony Windle as he manhandles his pickup truck over the rough road winding across the wild moorland terrain. As if on cue, a few minutes later the ground turns white as the rain changes to snow. “You can get several degrees of frost at this end of the job but nothing at the other.”

The reason Windle can enjoy four seasons in one day is because his site is massive. It covers 22 square miles, which is about the size of Brighton, and will be Europe’s largest onshore wind farm, Whitelee, when it is completed next year – big enough to power all the homes in nearby Glasgow. The sheer scale of the place presents project director Windle with a number of challenges, not least just getting around. “It’s 16.5km from end to end and takes 50 minutes to drive across,” he says. The road we are driving along was built by Windle’s team, Morrison Construction, and is just one in a 90km network that has been laid to enable 140 mammoth 2.3kW turbines to be erected and connected to the grid. Not only is the site bleak and remote, but the ground conditions are atrocious. Being a moor, the ground is made up of peat, areas of which are fluid. “Fluid peat is like soup,” says Windle. So, what is involved in building a £79m wind farm in the middle of nowhere on a giant lake of liquid peat?

When Windle first arrived on Eaglesham Moor there was nothing but a farm road, and tracks used by the Forestry Commission. Large areas of the moor are wooded; indeed Morrison Construction has had to clear 633ha of woodland so the roads and turbines could be constructed. The area is still a live forestry site and Morrison Construction, which is working in a joint venture with Balfour Kilpatrick, has to liaise constantly with the Forestry Commission. “We have to make sure they don’t have timber wagons blocking the road,” says Windle.

Before Morrison Construction could start work it had to come up with a strategy to minimise environmental damage. Part of the site is in the catchment area for reservoirs supplying Glasgow, and it was important not to pollute the water. Run-off from roads and construction work has to be collected, and the dirt allowed to settle in lagoons, before it can be discharged into watercourses.

Roads are a key element of this project. Although the wind turbines are brought to site in pieces, these are still big – a blade is 45m long. The parts are brought in by turbine specialist Siemens on elongated low loaders weighing up to 130 tonnes, and without decent roads they couldn’t get in. There is one key 16.5km long spine road with a network feeding off it to the 12 “arrays” or groups of wind turbines dotted across the site. Constructing the spine road was the first job when Morrison started on site in October 2006.

Building nearly 90km of roads is a major undertaking. Six quarries or borrow pits have been created to supply the 1.5 million m3 of rock needed to build the roads and turbine bases. A fleet of 85 30-tonne dumptrucks constantly ferries the rock around. “I think we have every dumptruck in Scotland; we had to travel down south to get enough trucks for this job,” says Windle.

About 65% of the roads are built using floating construction because of the deep and sometimes fluid peat. Windle says Morrison has perfected this method of construction on other wind farm projects in the Scottish Highlands. The road is laid straight on top of the heather. A geotextile mat is laid first, followed by a geogrid. A 600mm depth of graded rock is placed over this; the rock is sized to fit through the holes in the geogrid which locks it in place. This is rolled, and 200mm of crushed rock is laid over a second geogrid to form the surface.

The road surface is generally good with the odd rough patch. Two teams work round-the-clock to maintain the network, which gets damaged by heavy traffic and the extreme weather. “It’s like painting the Forth Bridge, a never-ending job,” sighs Windle.

Typically there is a 5m thick layer of peat on top of about 3m of glacial till before you get to the rock underneath. That’s a deep hole.

A 15mph speed limit is in force, which Windle says is needed because the roads are only 8m wide. “Vehicle collisions are probably one of the most hazardous parts of the job,” he says. “It’s pretty narrow when you get two 30-tonne dumptrucks passing each other. If you go out onto the soft verge you tip over. It happened quite a lot in the early days.”

Once the roads are in place, work can get going on the turbine bases. Morrisons has a team churning these out at a rate of two a week, although last summer Windle had two teams on the job to up production and get ahead of programme. “We have pretty stringent liquidated damages in the contract so we were trying to get a few bases in the bank to minimise our risk,” he says.

The bases need to be substantial to withstand the considerable overturning forces generated by the wind pressure on the large turbines. Typically there is a 5m thick layer of peat on top of about 3m of glacial till – deposits left by melting glaciers – before you get to the rock underneath. “That’s a deep hole,” says William Cannon of Donaldson Associates, which designed the foundations. The firm has worked with Morrisons on other wind-farm projects and Cannon says conditions were particularly difficult at Whitelee compared to the Highlands, as the peat is deeper and initial investigations were hampered by lack of access.

Four foundation base designs were selected for Whitelee. Three are gravity bases and the fourth is piled. The gravity bases share the same basic design – a 3.1m deep reinforced concrete base sitting on top of granulated fill which varies in depth according to how far down the solid ground is. The gravity foundations vary in diameter from 15.85m to 16.75m – the bigger bases are used over poorer quality ground. “There were some areas of the site where we weren’t confident conditions would be adequate for a gravity foundation,” says Cannon. “But we haven’t yet had to use a piled foundation.”

If the foundation is in fibrous peat, construction is relatively straightforward. A big hole is dug, granulated fill is brought in and a layer of blinding concrete poured to form a solid base. Rebar is fixed, shuttering installed and finally the main concrete pour takes place. An upper pedestal is then cast with the bolt fixings for the turbine. The main challenge is the distances – in some instances the bases are 13km away from the main batching plant on the site. A fleet of up to 13 lorries is needed to bring concrete from the batching plant to the base.

Bases constructed in fluid peat require a different excavation technique, as any hole simply fills up. An excavator is used to punch large rocks through the fluid peat down to the level of the glacial till. This is followed by smaller rock; Windle says this process is a skilled operation. “It’s done very much by feel; the operator has to ensure the rock is punched down into the glacial till,” he explains. The resulting circle of punched rock holds the fluid peat back so the middle can be scooped out and the base constructed. An area of hardstanding is also built alongside the base to support the crane used to erect the wind turbine. To date 82 out of 140 bases have been constructed.

The final job is installing the cabling, which is done by Balfour Kilpatrick. Cables are laid in trenches at the side of the roads as quickly as possible. This is partly because the trenches are a hazard to vehicles, and partly to stop people stealing the cables for scrap. “The earth cable has to be put in and covered up on the same day. We have had instances of the cable being dragged out of the ground,” says Windle. The cables terminate at the turbine base, and a heavy concrete cap is placed over this area – again to stop theft.

The base is handed over to Siemens, which supplies and erects the turbines. The tower comes in two sections and is erected first, the nacelle is fixed next, then the hub and finally the blades. A 500-tonne crane and two mobile 120-tonne cranes are used for this task. The plan is to erect two turbines a week but ironically wind is a problem.

“We have been winded off for the past month,” says Morgan Houtmeyers, Scottish Power’s senior civil engineer on the project. “But you want a windy site; it’s a quirk of wind farm construction.”