Being the Queen’s builder is an amazing platform from which Fairhurst Ward Abbotts’ Kevin Brush has built a construction business. Just don’t ask him about baby George’s nursery 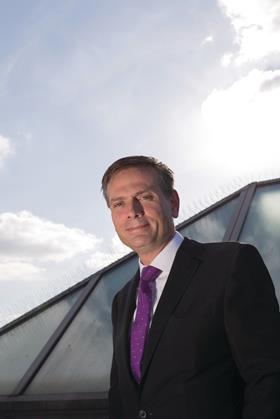 Let’s just say that most portraits for Building aren’t taken in such historic, not to say precipitous, spots. But for Kevin Brush - managing director of Fairhurst Ward Abbotts, which holds the royal warrant for building and decorating services to Her Majesty the Queen, no less - the rooftop of the National Gallery on Trafalgar Square seems appropriately august. “Just don’t ask me to take another step backwards,” says Brush.

The photo shoot follows an entertaining and informative tour though the labyrinth of rooms, stairs and corridors that make up both front and back of house spaces in the National, where Fairhurst Ward Abbotts, founded in 1941, has been engaged for the last eight years to do building and refurbishment works. The gallery is just one of a clutch of national treasures on which Brush has worked, including the royal palaces, the Houses of Parliament and Chatsworth House. “If you name a listed building, it would be unusual if we haven’t had a connection at some point,” he says.

The list of famous clients and prestigious structures on which Fairhurst Ward Abbotts has worked is indeed pretty exhaustive. But what particular challenges has Brush found in running a construction firm that focuses on winning work on some of the UK’s finest historic buildings, and can he use that royal connection to the firm’s advantage?

Despite his elevated clients, Brush himself is rather down to earth. Born to working class parents, he left school at 16 to take up an apprenticeship as a fitter with British Gas. He completed the apprenticeship (“If you ever want your boiler serviced …”) but almost immediately decided to train as a trainee building surveyor. After 10 years of evening classes he had his chartered status, plus an MBA, and embarked on a progressively successful career in surveying.

Then seven years ago, on the lookout for a fresh challenge and with money in the bank, Brush came across Fairhurst Ward Abbotts at a time when the firm was looking for a buyer. At that point the company, which had held its royal warrant since 1996, was turning over around £10m a year, and Brush thought that he saw an opportunity for growth. He acquired a majority stake, although he didn’t take up his current role until 2009.

“It had huge potential. It had the royal connection […] and the privileged access that gives us to such magnificent buildings. We can use that,” he says, adding that the experience of working on royal buildings provided the company with highly transferable skills. “We can use [them] in other areas from castles to guildhalls, but also in high-end residential in London and around as well - both new build and conservation.”

Fairhurst Ward Abbotts now comprises six distinct businesses and turned over £27.5m in 2012/13, compared with £23.7m in 2011/12, and Brush estimates that the company will have a turnover of around £40m-45m this financial year, although he says that margins will remain pretty tight.

The unusual nature of Fairhurst Ward Abbotts’ work means that its personnel profile differs significantly from most contractors. In 2012/13 the company employed, on average, 159 people, of which 96 were direct labour, compared with 63 involved in management and administration. In an industry in which subcontracting is the norm, those figures are striking. The explanation is two-fold. First, with its work on historic buildings, Fairhurst Ward Abbotts requires specialisms that are extremely hard to come by. And second, the firm simply cannot risk subcontracting to an unknown or untested entity.

“In environments like these, when you’re surrounded by such irreplaceable value, you have to trust your staff implicitly,” says Brush, gesturing to the paintings hanging on the walls of the meeting room in the National Gallery. “You can’t just have anybody in. But then there’s the skill set as well. The skill set of our stone masons … well, you could buy it in, but [if they’re in-house] over the years the level of skill improves and improves.”

Brush is also acutely aware that many of the specific skills he requires are in danger of dying out, hence the apprenticeship schemes Fairhurst Ward Abbotts runs in partnership with the National Trust and English Heritage.”They come through and provide a bedrock of skills in the business,” he says.

Each of the business’ divisions is headed by a director who has a close relationship with each project and client, something that Brush views as fundamental to Fairhurst Ward Abbotts’ ongoing success and reputation. “Arguably we’re limited in terms of growth because I don’t want the directors to be too far away from that core customer service,” he says, adding that if a director took on too many projects and had to delegate relationship management, it would present a potential risk to the firm’s reputation. “I’ve seen it too often in other businesses, and in environments like this you just can’t afford it - the reputational damage is too great.”

This same need to be seen as a safe and reliable pair of hands in a sensitive environment also leads the company to go to enormous lengths to minimise risk on site.

“I think that the job I’m most proud of was when we were working above a ceiling in a stately home - a painted fresco ceiling of priceless value,” says Brush. “A flinch beam had gone and we had to use a steel beam to strap it.” Needless to say the meeting of priceless fresco and heavy steel is one that has the potential to end unhappily. “The consequences of getting it wrong were … you just don’t want to imagine. The team had to rehearse it week after week with a mock-up and used specialised equipment to make sure that it went okay.”

So Fairhurst Ward Abbott takes its time in order to get things right - and most of its clients can probably afford to pay for it. But come on, how about a little gossip? Wills and Kate’s nuptials must have led to bit of renovation work - or how about the arrival of little George? For the first time in the conversation, Brush, ever mindful of that gold-plated reputation, starts to sound more like a politician than a builder. “We get involved with some schemes that are really quite special,” he says. “We’ve helped refurbish parts of Buckingham Palace. We’re always hopeful of more work from the royals … they’re a great client.”

Is Brush treading on eggshells? “You wouldn’t want me to betray a confidence, would you?” Well yes, actually. Brush laughs, but uses the comment as a spur to make a serious point about his business. “Whether we’re working for a movie star or whoever, it’s betraying a trust, isn’t it? And the last thing that we want to do is betray a trust,” he says.

And with responsibility for a company whose success rests on maintaining a reputation for quality and discretion there is only one response to Brush’s answer: fair enough.