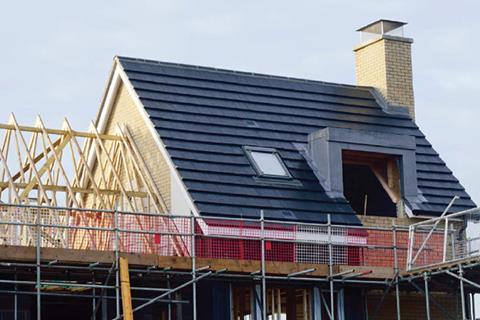 Sentiment surveys indicate the UK economy has had a slower start to 2016 with Markit’s all-sector Purchasing Managers’ Index (PMI) survey showing a slowdown in activity in January and February, and predicting slowing growth in the first quarter.

All sectors in the PMI index have showed signs of slowing hence the more cautious view of economic performance in 2016.

The construction PMI recorded a reading of 54.2 in February, a decrease from 55.0 in January, but still well above the 50.0 mark which indicates expansion.

The latest inflation figures show a slight increase but the level is still well below the target of 2%. CPI increased to 0.3% in January compared to the same month in 2015, the third consecutive month that this occurred.

The labour market continued its strong performance with the latest unemployment figures showing that the current claimant count rate remained at 5.1% at the start of 2016.

This demonstrates the continual improvement in labour market conditions in recent months and this looks set to continue.

A slight improvement in official figures for 2015 show construction is growing at a steady pace despite monthly fluctuations.

The latest figures from the ONS show that the construction sector in the UK declined by 0.2% between January 2016 and December 2015. Comparing January output levels with the same month in 2015 showed a decrease of 0.8% (see Construction activity by sector). This fall was unexpected but it should be noted that the monthly figures for construction output are often volatile and the previous three months’ data had been significantly revised upwards.

The CPA/Barbour ABI Index, which measures the level of contracts awarded using January 2010 as its base month, recorded a reading of 126 for February (see Contracts awarded). This is a slight decrease from last month but continues to support the view that overall activity in the industry remains strong. The readings for residential and commercial fell but industrial factories rebounded.

According to Barbour ABI data on all contract activity, February witnessed an increase in construction levels with the value of new contracts awarded £5.6bn, based on a three-month rolling average. This is a 4.2% increase from January and an 11.6% increase on the value recorded in February 2015. The number of construction projects within the UK in February increased by 11.6% on January, and were 6.4% higher than February 2015.

The majority of the contracts awarded in February by value were in the East of England region, accounting for 29% of the UK total.

This is followed by London and the North-west with 16% and 9% of contract award value respectively (see Locations of contracts awarded). The main reason for the East of England’s figures this month was the £1.8bn contract to construct the East Anglia One offshore wind farm. Continuing recent trends, the offshore renewables sector in the UK appears to be thriving with a number of high value projects in the pipeline. The largest construction project by value in London was the Woolwich Estates regeneration project, which aims to deliver 1,500 homes in the Connaught Estate and has a project value of £262m.

Residential had the highest proportion of contracts awarded by value in February with 39% of the total. The infrastructure sector was close behind with 33% of the contract value awarded. This is an indication of the continuing strength of the residential sector within construction, showing that while the top end of the residential market appears to be cooling, activity in the new build market remains strong. In addition, the prominence of the infrastructure sector contracts in February provides encouragement for longer-term growth in the industry, as it is historically one of the biggest sectors within construction. 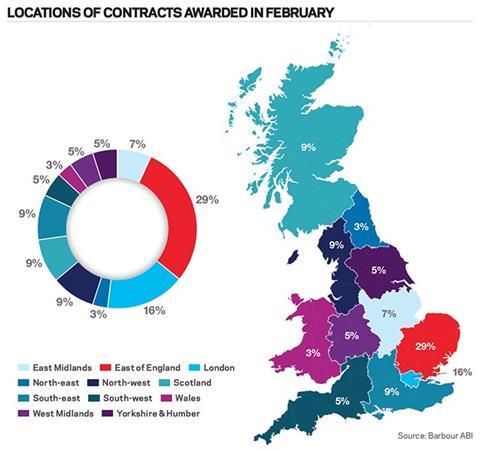 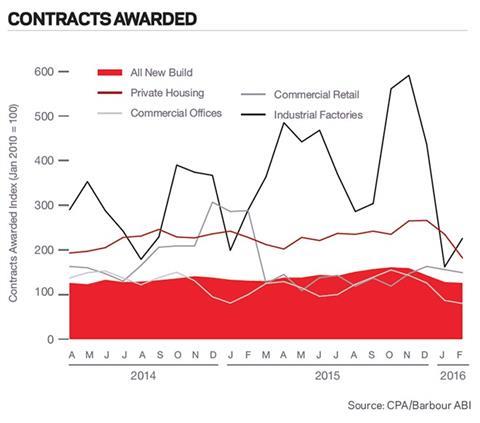 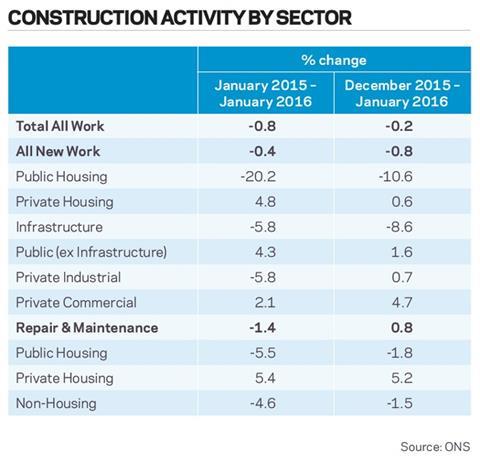 Activity in the residential sector increased in February with the total value of projects valued at £1.8bn based on a three-month rolling average. This is a 25.3% increase compared with January but is 2.6% lower than February 2015. The number of units associated with residential contracts awarded decreased 8% between January and February based on a three-month rolling average, and is 27.6% lower than February 2015. This demonstrates the lower amount of new contract activity in residential over recent months.

The latest house price indices for January from Nationwide showed that average house prices are rising at 4.8% annually, an increase from 4.4% in January. This means that the rate of house price growth has remained between 3% and 5% since the summer of last year. The Halifax reported annual house price rises at 9.7% in February, no change from January. The performance of housebuilders continues to be strong with Persimmon increasing underlying profit by 34% and Bovis increasing profit by 20%.

London is the main location of activity in the residential sector this month, accounting for 26.9% of the value of contracts awarded, an increase from 13.1% from the same month last year. Contracts such as the Woolwich Housing Estate redevelopment contribute to London’s share this month. 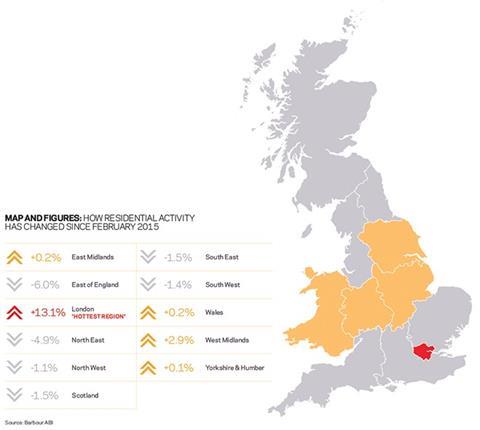 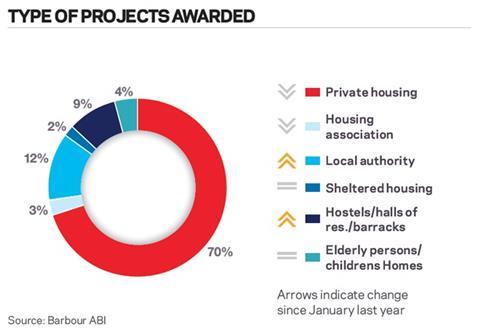 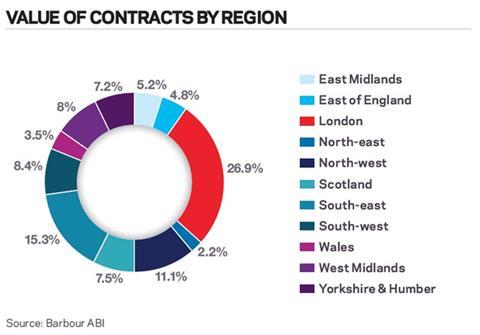 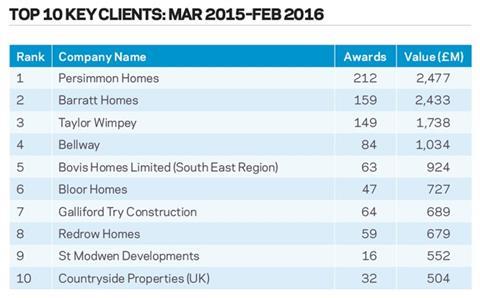 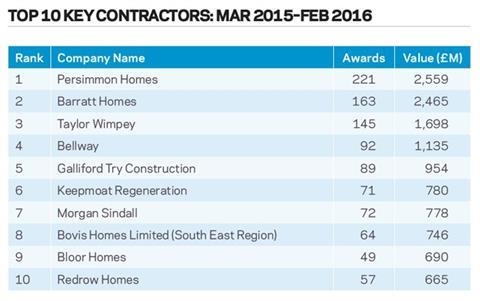