The UK economy and the construction sector both continue to grow but concerns over the EU referendum have led to things slowing down in recent months. Michael Dall discusses the highlights of Barbour ABI’s monthly Economic & Construction Market Review 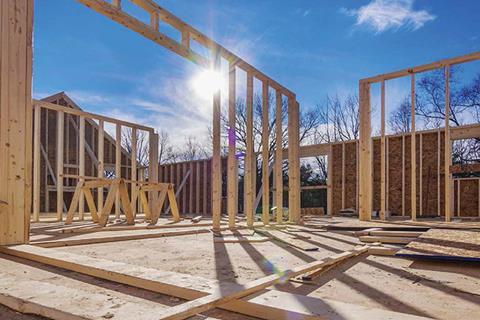 The macroeconomic signals have been mixed over the past month with the Purchase Managers’ Index indicators suggesting a slow down in April but increasing activity in May. Based on the current figure of 52.8, Markit estimates the economy will grow by 0.2% in the second quarter. The levels of activity are still above 50, the level that indicates expansion in the sector, but the lower readings in April have been attributed to uncertainty of the UK’s membership of the European Union.

The level of unemployment remained low, however, at 5.1% indicating that while uncertainty about British exit from the European Union has existed, there is little sign of this in the labour market statistics.

Earnings growth also remained strong in the UK economy with regular pay in nominal terms increasing by 2.3%. This is above the level of inflation of 0.3% indicating real wage growth in the economy. Total pay increased by 2% giving further indication of an improving labour market in the UK.

The construction sector
The latest figures from the ONS show that the construction sector in the UK increased by 2.5% between March and April 2016. Comparing output levels with April last year showed a decrease of 3.7%. It shows that April was a better month than had been expected by economists but the industry has shrunk since this time last year meaning its longer-term performance is not as strong.

It is, however, clear that the housing sector is the main component of growth within the industry. New private housing increased by 2.7% between March and April 2016 and 5.8% from the corresponding month in 2015.

The construction sector in the UK increased by 2.5% between March and April 2016. Comparing output levels with April last year showed a decrease of 3.7%

Output in the private commercial sector also fared well, increasing by 3.2% between March and April, and by 1.2% on April 2015. Infrastructure decreased by 1.1% and is 18% lower than April 2015. This highlights that the growth patterns within the industry are still reliant on housing although the yearly increase in commercial output is encouraging.

The CPA/Barbour ABI Index which measures the level of contracts awarded using January 2010 as its base month recorded a reading of 146 for May. This is an increase from the previous month and continues to support the view that overall activity in the industry remains strong. The readings for private housing were up significantly in the month, but commercial offices fell slightly from 102 to 100. Commercial retail increased considerably in May and this indicates that the pipeline of work in the private sector remains strong.

According to Barbour ABI data on all contract activity, May witnessed a decrease in construction levels with the value of new contracts awarded £6.1bn, based on a three month rolling average.

Projects by region
The majority of the contracts awarded in May by value were in Scotland, accounting for 24% of the UK total. This is followed by London with 19% of contract award value.

The main reason for Scotland’s figures this month was the award to develop the Beatrice offshore wind farm in the Moray Firth valued at £1.3bn, which is yet more evidence of the burgeoning renewables sector in the country.

The largest project awarded by value in London was Ten Bank Street in Canary Wharf, which is valued at £325m and is yet further evidence of the continued attractiveness of the area as a commercial office location.

Types of project
Infrastructure had the highest proportion of contracts awarded by value in May with 39% of the total. The aforementioned Beatrice wind farm in Scotland and Balfour Beatty’s £250m contract to construct a 3,600 space lorry park on the M20 in Kent are the main reasons for the strong performance in May.

The residential sector accounted for 25% of the contract value awarded. This is an indication of the continuing strength of the sector within construction, showing that while the top end of the market appears to be cooling activity in the new build market remains strong. 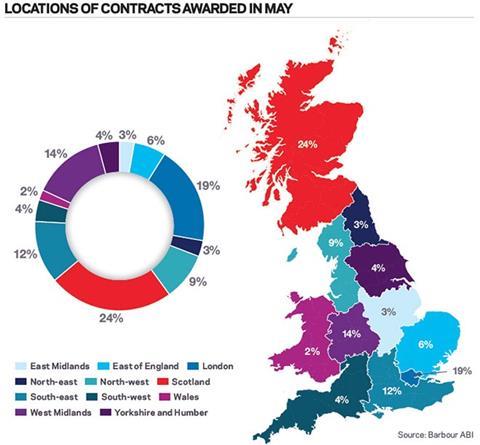 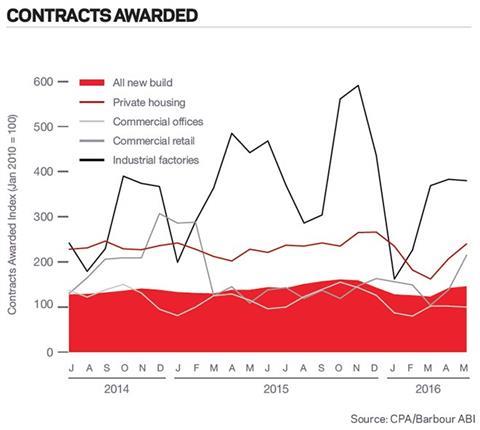 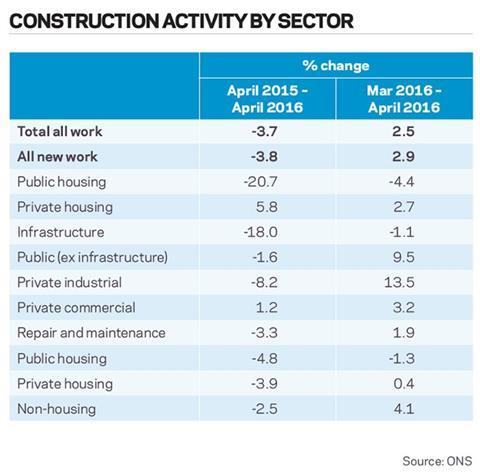 The value of contracts awarded in the infrastructure sector in May totalled £2.1bn based on a three month rolling average. This is 6.3% higher than the previous month and 13.3% higher than May 2015.

The main location of infrastructure projects this month was Scotland with 51.4% of the value, and this was 50.3% higher than May 2015. The main project awarded in the region was the Beatrice offshore wind farm.

The West Midlands was the next most active location accounting for 17.9%, a 17.4% change since May 2015. The award of the smart motorway contract which covers junctions 13 to 15 of the M6 in Staffordshire was the highest value contract awarded at £226m.

The award of this wind farm contract in May means that utilities was the dominant sector within infrastructure, accounting for 68% of the contract value awarded. Transport was the second major sector accounting for 21% of the value of contracts. 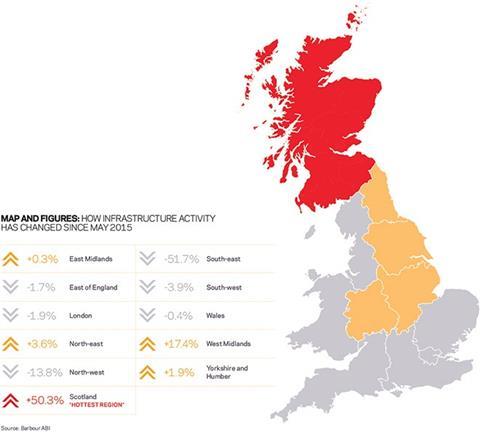 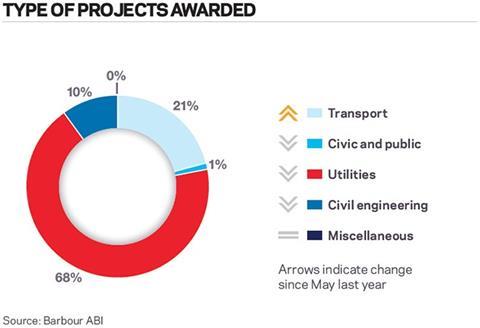 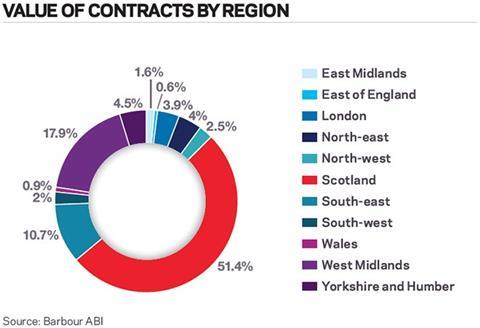 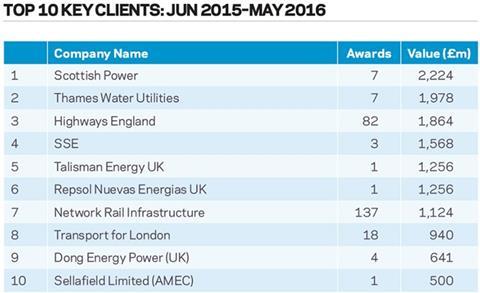 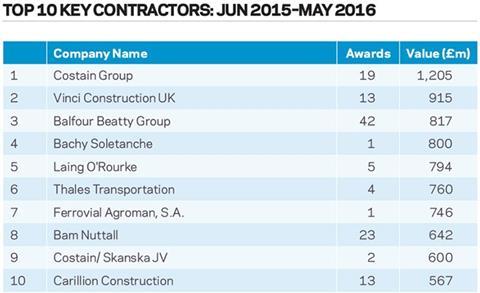