A major revision of UK GDP figures this month estimated that the economy had grown by 0.9% in Q2, revised upwards from 0.8%. The figures also restated the depth of the recession in 2008/9, with the economy now estimated to have shrunk by 6%, rather than the 7.2% previously estimated. The latest data also shows that the economy is now 2.7% above its pre-recession levels, compared to the previous estimate of 0.2%.

It is worth noting, however, that while these revisions lessen the severity of the recession, it has still taken longer than previous downturns for output to return to peak levels. At this point after the 1990 recession, output levels were 15.7% above pre-recession peak.

Other macroeconomic indicators continue to point to improvement in the UK economy. The labour market maintained its recent strong performance as unemployment fell once again in the three months to August and now stands at 6%, which is the lowest rate since 2008.

The rate of inflation also fell this month to 1.2%, its lowest level since September 2009, with lower import prices, falls in food prices and oil prices all contributing. These latest figures are likely to delay any decision to raise interest rates in the near-term.

Other news of note this month on the UK economy includes:

While the headline economic indicators continue to point to a strong UK outlook there is increasing evidence of a slowdown in the eurozone with the normally resilient German economy showing signs of slowing growth. Having said that, the IMF remains confident about the UK’s economic prospects, predicting it will be the fastest growing economy in the G8 this year. While output is growing and unemployment falling there are still fundamentals that pose longer-term problems for the economy, particularly low productivity

The latest figures from the ONS show that the construction sector in the UK shrank by 3.9% between July and August 2014.

Comparing output levels with August last year showed a decrease of 0.3%. It should be noted that there were significant upward revisions to previous datasets which was the main reason for the fall. However, it is evidence that the recent large increases in output are starting to moderate.

It is clear that the housing sector is the main component of growth within the industry over the longer-term. While all sectors other than public housing declined in the month, private housing output increased by 13.0% from the corresponding month in 2013 (see Construction Activity chart, right). At the same time public housing output was 27.9% higher than last year. Output in the private commercial sector fell 8.0% year-on-year and infrastructure decreased by 13.8%. This highlights that the growth patterns within the industry are currently reliant on housing and broader improvements are needed to ensure a robust recovery.

The CPA/Barbour ABI Index, which measures the level of contracts awarded using January 2010 as its base month, recorded a reading of 132 for September (see Contracts Awarded, right). This is a slight increase from last month and continues to support the view that overall activity in the industry remains strong. The readings for the three major sectors, private housing, commercial offices and commercial retail were all up this month. This indicates that, while output fell, the pipeline of work in the private sector remains strong. 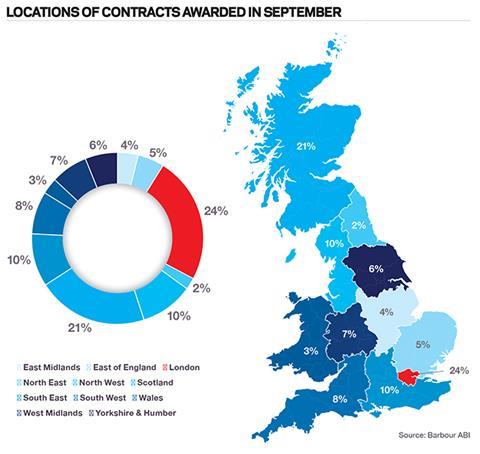 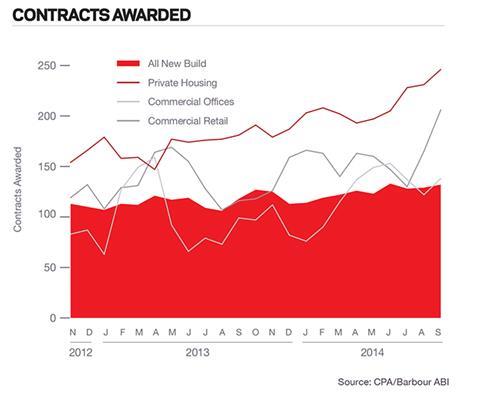 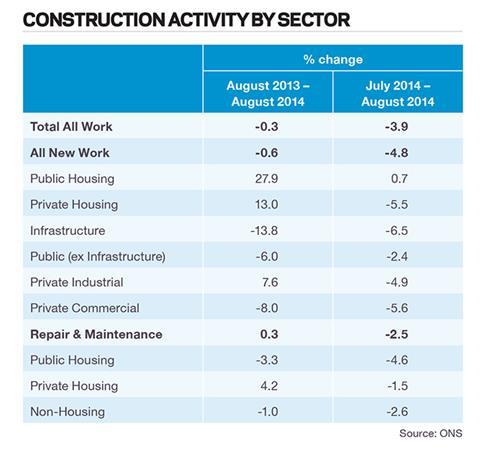 According to Barbour ABI data on all contract activity, September witnessed an increase in construction levels with the value of new contracts awarded £5.6bn, based on a three-month rolling average. This is a 5.8% increase from August and an 11.7% increase on the value recorded in September 2013, an indication of continued growth in the third quarter. The number of construction projects within the UK in September increased by 7.4% on August, and is 13.8 higher than September 2013.

The majority of the contracts awarded in September by value were in London, accounting for 24% of the UK total (see Locations of Contracts, right). This is closely followed by Scotland with 21% of contracts awarded. The main reason for this was the £600m Battersea Power Station phase 2 contract which includes commercial, residential and leisure uses. There was also a significant hotel project awarded this month called the Poultry Hotel Project valued at £80m and based in the City of London. In Scotland, two major infrastructure projects explain the strong performance in September. A new bypass to the west of Aberdeen was awarded this month at a value of £400m and a £300m on-shore wind farm based in the Highlands also reached contract award stage. In addition a major hospital contract was awarded in Scotland for the Dumfries and Galloway Royal Infirmary, a 350-bed hospital valued at £200m. Other contracts of note this month are the £75m Anfield stadium expansion and the mixed residential/industrial project at Wellesbourne in Warwickshire also valued at £75m.

Residential had the highest proportion of contracts awarded by value in September with 24%.

The infrastructure sector also featured prominently this month accounting for 23% of the total value of all projects. Commercial & retail accounted for 22%. This is more of an even split than in recent months where residential has tended to dominate the values recorded each month, perhaps indicating a widening of the increase in construction activity.

Spotlight on the education sector

The value of contracts awarded in the education sector was £811m in September based on a three-month rolling average, an 8.5% increase from August. This figure was 62.5% higher than September 2013 indicating the sector’s improvement over the past year. The values of contract awards in the three months to September were 40.1% higher than the same period last year, showing the longer-term growth in contracts awarded.

The main location of activity this month was the North-west which accounted for 22% of the value of projects, which was an 11.5%
increase from September 2013 (see Type of Projects Awarded and Value of Contracts Awarded, right). This is primarily due to the awards of a number of contracts from the Priority School Building Programme across the region, individually valued at £10m.

The plethora of Priority School Building projects mean that stateprimary and state secondary projects dominate the sector this month accounting for 60% of the total value of projects awarded in September (see Type of Projects Awarded, right).