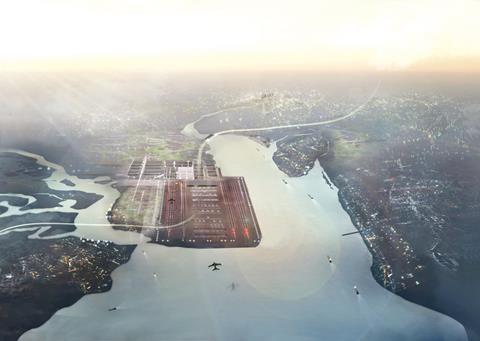 Foster’s scheme for a four-runway airport on Kent’s Isle of Grain.

Foster + Partners has thrown cold water over reports that it would cost £2bn to replace habitats in the Thames Estuary if a new hub airport was built there.

The architect insisted the real figure would be much smaller and said its proposal for a four-runway airport was still a realistic option.

The 232-page report by engineer Jacobs for the government’s airports commission, was published this week. It looks in detail at the environmental impacts of building an airport on the Hoo Peninsula between the Thames and Medway estuaries.

It said: “An airport development on the Hoo peninsula is likely to result in large-scale adverse effects on international nature conservation designations… If an airport development was to pass the alternative solutions test … a large area of compensation habitat creation would be required and this would be on a scale unprecedented for any single development in Europe.”

Opponents such as Labour’s transport spokeswoman on the London Assembly, Val Shawcross, said this was the “final nail in the coffin” and urged mayor Boris Johnson to ditch his “vanity project”.

The Financial Times described it as a “further setback for Boris Island”.

But Huw Thomas, the Foster’s partner leading on the project, said people with vested interests had taken the figures “completely out of context”.

Thomas said most reports had simply quoted the £2bn figure.

His own estimate is around the £500m mark.

“People like to make things sound very difficult and of the most extraordinary scale so they talk up the problem rather than talking about the opportunity and how we could solve it,” he said.

“They say it will take an awful lot of study but that’s happening anyway, regardless of airports. The Environment Agency is down there studying those habitats working out how to move them and the cost of moving them because of the threat posed by climate change.

Foster’s proposal is for the eastern-most part of the peninsula, known as the Isle of Grain. Other teams have proposed rival plans on neighbouring sites.

Thomas dismissed most of these as “hair-brained”. “It was extraordinary,” he said. “We spent a couple of years on it before it became a hot topic and did an enormous amount of work with many consultants.”