Decision comes 18 months after it was thrown out

A £100m scheme by Grid Architects kicked out by Camden planners in 2014 has now been approved by secretary of state Greg Clark on appeal.

The proposal for a 24-storey tower at Swiss Cottage was thrown out by the council’s planning committee just under 18 months ago.

At the time, heritage consultant Philip Davies, a former director of English Heritage, described the 266m block of 188 flats as a “monstrous proposal, which is grotesquely out of scale with its surroundings”.

But the scheme, which is called Theatre Square and is being developed by Essential Living, has been OK’d after the developer appealed to the planning inspectorate. 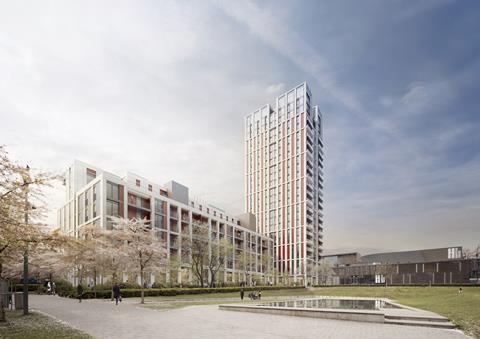 Objectors said the building was too tall for the area

Its managing director Scott Hammond said: “We are very pleased [Clark] has backed the independent planning inspector’s recommendation that this important proposal for the regeneration of Swiss Cottage should proceed.

“This is entirely consistent with the original positive recommendation of Camden council planning officers and the support received from both the Greater London Authority and Design Council.”

But Conservative group leader at the council Claire-Louise Leyland said: “I’m very disappointed that the secretary of state chose to follow the planning inspector’s recommendation and allow the appeal. This tower block will completely overshadow our beautiful area and the Swiss Cottage open space that our residents value so much.”

Work on the building is expected to last two years with the building set to be Camden’s tallest residential block. The existing 1980s building, once home to the Ham & High newspaper, will be demolished. A separate building of up to seven storeys is also planned for the site.

Grid is already working on another Essential Living scheme – a deal to re-clad the Archway Tower office block in north London as part of its conversion into 100 private-rented flats. This scheme is due to finish later this year.