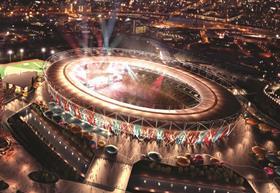 Architects and engineers have hailed a “landmark deal” to allow firms that designed and built the Olympic park to promote their work fully.

The agreement, between the Department for Culture, Media and Sport, the British Olympic Association (BOA) and the International Olympic Committee, will remove the marketing gag on firms, which prevents those involved in the construction of the 2012 venues from promoting their work on the project.

Lifting the marketing gag was a key part Building’s 2012 campaign throughout last year. The campaign - which highlighted a complaint first raised by New London Architecture chairman Peter Murray that firms could not take “due credit” for their work - was later backed by Olympic Delivery Authority chairman Sir John Armitt. The RIBA and the Institution of Structural Engineers (ISE) also supported it with their Drop the Ban lobbying.

Under the agreement, announced on Monday, firms involved in the Games will be able to apply for a free licence to promote their 2012 work at trade shows, apply for industry awards and use their involvement in direct pitches and tenders.

The government has committed £2m to the BOA for the scheme. In a joint opinion piece published on Monday, prime minister David Cameron and London mayor Boris Johnson said the scheme would allow “tens of thousands of British businesses that did such fantastic work […] to get the benefits of the public recognition they deserve”.

RIBA president Angela Brady said the agreement would be “a real boost for companies big and small and enable them to really capitalise on their work in the design, delivery and legacy of the 2012 Games”.

The RIBA said it would now give architects wishing to submit Olympic 2012 projects for this year’s RIBA awards an extra week to do so, with the deadline extended until 8 February.
ISE past president John Nolan said the announcement was late but “most welcome”. “The Olympics have received universal acclaim and are an excellent advertisement for not just ‘Construction GB’ but ‘Construction Design GB’. The export market for the design of temporary and permanent stadiums is huge,” he said.

“British engineers and architects now have the opportunity to showcase their excellent work and expertise in the run up to Rio 2016 and beyond.”

A new website has been set up for firms to apply for a licence: www.srs2012.com/auth/login

Well done Building for this excellent campaign. It is a pity it has taken so long, but now I hope that all the businesses that contributed to the magnificence of the Olympics - the park and the Games themselves – will benefit from the credit they brought to UK Plc.
Dame Tessa Jowell MP

It was [by] all of us joining forces together though campaigns like Drop the Ban and Building 2012 that we were able to exert our combined strength and apply the necessary pressure on the government, IOC and BOA. Now we can start making up for the lost time.
Angela Brady, President, RIBA

I’m absolutely delighted … We are now in the enviable position of being able to promote and export our significant skills to a global audience, who will be hoping to emulate the
success of London 2012 this summer.
Jason Prior, chief executive of buildings and places, Aecom

Congratulations to Building for keeping up the campaign when no other publication seemed interested. It was only through the diligence of Building that this was brought to the attention of the national and other press.
Peter Murray, chairman, New London Architecture