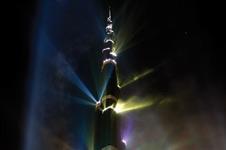 The recently opened Burj Khalifa, the world’s tallest building, has won a top gong at a new construction conference in Abu Dhabi, despite concerns over its future.

The Cityscape Awards, held at the Cityscape Abu Dhabi construction conference which opened yesterday, gave the Dubai tower an award for the best mixed-use project.

When the 828m tower opened in January some property experts doubted whether it would get more than 50% occupancy in its first 6-12 months. However Emaar, the tower’s developer, says it has sold 90% of the available space in the £1bn project.