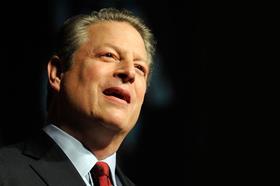 Speaking at a climate leadership event in central London this week hosted by the Green Alliance and the CBI, Gore tore into the government’s backtracking on its commitments on a host of renewable and energy efficiency policies.

Commenting on the government’s attitude to green policy, Gore added: “Words. Words. What about actions? The actions that have been taken here in the last few months are puzzling to me.”

John Cridland, director general of the CBI, was equally critical. He said: “Business must be - and wants to be - part of the solution to tackling the global challenge of climate change.”