Practice lands Toronto masterplan on back of King’s Cross experience 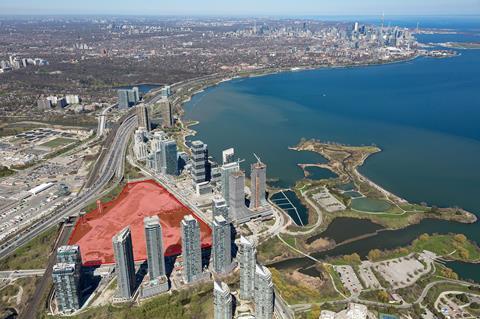 Allies & Morrison has won a major masterplanning competition in Toronto that is set to be its first built project in North America.

The practice is hoping the 11ha Humber Bay Shores project in the Canadian city will be the job that unlocks the continent for them after three recent attempts to break in ground to a halt.

Partner Alfredo Caraballo predicted that with so many post-industrial cities in North America needing masterplanning expertise, the firm would open an office out there “in the near future”. This would be its only office outside the UK after the Doha studio shut once its 35ha Msheireb project completed.

Allies & Morrison, which was masterplanner on the King’s Cross and Olympic Park developnments, was the only British architect shortlisted in an international competition for Humber Bay Shores, a brownfield former biscuit factory site close to the edge of Lake Ontario. It has been appointed lead masterplanner after a six-month competitive process. Gross Max and AKTII are also on the winning team.

The area around the demolished Christie Cookie building is already home to a number of high-rise towers but residents have complained there are no shops or street life. In winter an icy wind whips blizzards off the lake. The site is also traversed by rail lines and a motorway.

Allies & Morrison’s winning proposal addresses these issues with a cranked plan designed to keep the wind out and a network of covered streets that will be several degrees warmer than the rest of the city in winter. These link to a number of parks and open spaces and the whole development will be retail heavy at ground level.

The scheme will also add a railway station as well as a mix of housing types, entertainment, retail, education and health uses. The developer, First Capital Realty, is a retail specialist. Once a planning framework is approved by the city council, public consultation will begin on design ideas. They hope to submit it for planning in about 18 months.

The practice won another masterplan in Toronto last year but this has been paused. Its only other forays into North America were two international competitions for masterplan studies in New York in the last three years. The firm came second – beaten by Snohetta on Penn Station and local firm Partnership for Architecture and Urbanism on a job in Queens.