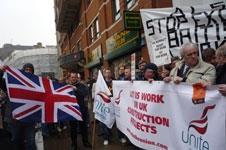 The letter was issued on Monday as the union prepared to send out ballot papers to members involved in the engineering construction sector.

More than 140 GMB and Unite shop stewards voted unanimously in June in favour of industrial action after pay negotiations broke down with the Engineering Construction Industry Association.

The letter threatens a legal challenge should the strikes go ahead. It says: “Alstom reserves the right to seek an interim injunction to prevent this industrial action and/or sue the GMB for damages.” It also says it believes it would be within its rights to sack striking workers.

Phil Davies, GMB national officer, said the firm had questioned how far the strikes were trade disputes, because one point of contention concerned the employment of foreign workers.

“The strike isn’t about foreign workers, it’s about tightening the audits to ensure workers get fair rates of pay and conditions, and reaching a settlement for 2010 pay terms,” Davies said.

We expect all sorts of reasons why we shouldn’t ballot. But we will go ahead

He added that he was pressing ahead with the ballot.

The ballot will run until 1 September, with industrial action expected to follow shortly after.

Seven sites will be targeted by the unions, including Alstom’s sites at Staythorpe and Sellafield.

Bob Blackman, the national secretary of Unite, said: “We expect all sorts of frivolous reasons why we shouldn’t ballot,” he said. “But we will go ahead with what we have to do.”

An Alstom spokesperson denied the letter was a threat of action and said: “We’ve just asked the GMB to explain why it thinks it has a trade dispute with Alstom.”