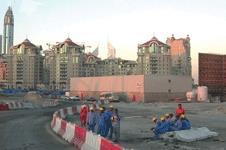 The UAE’s largest contractor Arabtec has posted a loss for the last quarter of 2009, with profit for the full year slashed by 50%. The contractor, whose projects include the world’s tallest tower, the Burj Khalifa, blamed the results on a charge of about $80m (£53.5m) for bad debts.

Last week Arabtec revealed it had stopped work on a £400m Nakheel scheme over a payment dispute. Nakheel is owned by state-controlled entity Dubai World, which shocked global markets in November by saying it would ask to delay repaying $26bn (£16.9bn) of its debts. Nakheel owes money to UK contractors and consultants, as well as banks and bond-holders, and payments are understood to have slowed even further amid the restructuring talks.

In January Arabtec announced it would sell a controlling stake to Abu Dhabi state-linked investment fund Aabar. It has also begun diversifying heavily beyond Dubai into markets including Saudi Arabia.