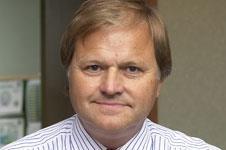 The revelation follows weeks of speculation that an overseas player had approached the group over an estimated £200m takeover in June.

At the time WYG confirmed that it had received an offer but on Wednesday it said talks had ceased.

A source close to the £220m-turnover company said: “Arcadis was the name in the frame. It is hungry for acquisitions and is still looking at other companies in this country.”

Haynes was appointed chief executive in July 2007
The source said the takeover bid had almost certainly come “out of the blue” given the fact that chief executive Lawrie Haynes has only been in the top job for a year. They said: “Either he was brought in to do a deal or it came as a complete surprise to him. My hunch would be the latter.”

Earlier this year a financial source described the takeover bid as ill-timed given Haynes’ recent appointment and suggested that this may be behind the failure of the bid.

They added that the move may still spark interest elsewhere, including private equity groups, and it is understood that CCMP Capital had previously run the rule over the company.

The financial source said: “These kind of talks take a while because WYG would speak to as many other interested parties as possible to make sure they get the best price. In the current climate the last thing the board wants to do is offload the business cheaply.”