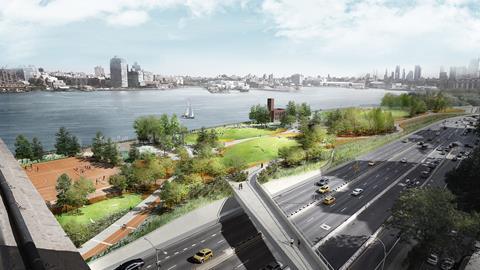 Arcadis has won a role on a project to improve the flood protection of New York’s Lower East Side coastline.

The scheme, which was awarded $335m (£248m) of funding from the US government, began in 2013 after Hurricane Sandy caused severe flooding in the US city in 2012.

Arcadis is to be the engineer of record on the US city’s East Side Coastal Resiliency Project to protect 2.5 miles of Lower Manhatten from severe weather events and rising sea levels.

The firm is part of an engineering team, that includes CH2M, which will work on the final design phase of the project for the design and construction department of New York City. The urban design of the scheme has been led by architect BIG.

The consultants with the City of New York and local communities are to design flood protection solutions that merge into the urban fabric for the 200,000 residents and 21,000 businesses in the area.

“Our team brings a wealth of expertise in climate change adaptability and resilience from our Dutch heritage and from our experienced engineers who designed flood protection systems across the Louisiana coast following Hurricane Katrina.”