The bridge has been designed by architect BDP and engineers WSP, Aecom and Mott MacDonald 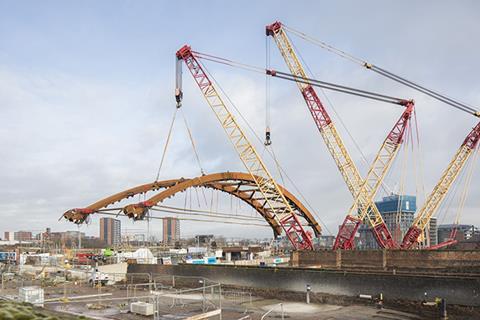 The Ordsall Chord rail project has seen its twin network arches lifted and fixed into position on the new bridge over the River Irwell in Manchester.

The bridge, designed by BDP with engineers WSP, Aecom and Mott MacDonald, is the 89m 600-tonne centrepiece of the project which comprises 300m of track and a series of new bridges and viaducts, connecting Manchester’s Piccadilly and Victoria stations for the first time.

Work on the project is expected to complete in December this year. It will create 300m of new track that will create a link between Manchester city centre’s main train stations – Victoria, Oxford Road and Piccadilly – for the first time.

BDP director Peter Jenkins said: “This design uses inclined hangers which cross each other at least twice instead of vertical hangers, which allows for a more elegant design that is thinner and uses less material. This is particularly important due to the proximity with grade I and II listed buildings.”

BDP is designing all the major architectural and urban realm elements of the project, including the landscaping and lighting to the important public spaces and heritage features beneath the bridges and viaducts.

Main contractor on the Ordsall Chord scheme for Network Rail is a joint venture between Skanska and BAM Nuttall. 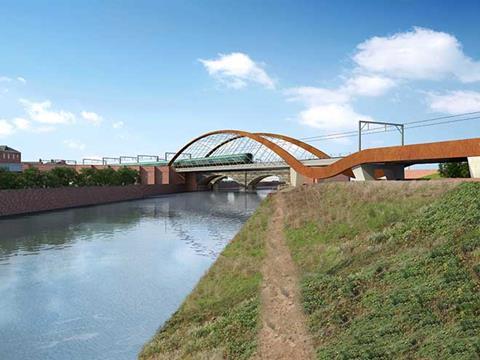