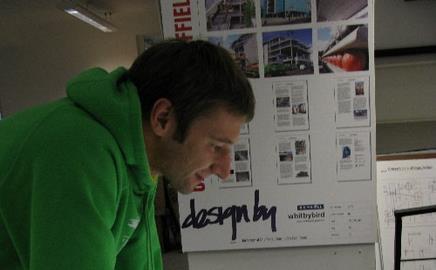 Be warned: Any readers in the vicinity of Hyde Park next month may be forced to take cover from the “Cullinan Bird” – a prototype flying machine being developed by Edward Cullinan Architects.

The architect, together with engineer Ramboll Whitbybird and Element Energy, is putting the finishing touches to its creation – a gigantic polystyrene flying machine spanning nine meters in length and four metres in depth.

The machine is being entered into the Red Bull Flugtag tournament at Hyde Park on 7th June, when 40 competing teams will attempt to fly their creations using only human power.

Cullinan Director Roddy Langmuir said: “As a bunch of professional amateurs, in flying terms we’d have to say that we’re winging it.“

Chairman of Ramboll Whitbybird Mark Whitby added: “We’ve always thought of ourselves as high-fliers and they say Red Bull gives you wings, this is our chance to find out.”

The team does have a secret weapon: Element Energy director Shane Slater, who helped design the plane using his expertise from a previous job working as an Aeronautical Engineer at Boeing.

The “Cullinan Bird” is being made out of specially cut polystyrene supplied by Cordek Europe’s largest supplier of specialist expanded polystyrene products for the construction industry.

The competition will be judged on distance flown and level of creativity. There will also be points for stage presence.