Architects and contractors have no idea cladding can be dangerous, Grenfell Inquiry hears

‘None of us had any idea there were such dangerous components being incorporated into cladding,’ says expert witness Paul Hyett

Architects and contractors all over the world have been routinely specifying ACM cladding for years with no idea how dangerous it could be, the Grenfell Inquiry has been told.

Expert architect witness Paul Hyett, a former RIBA president and HKS principal, said a fundamental review of the industry’s understanding and use of cladding was needed. 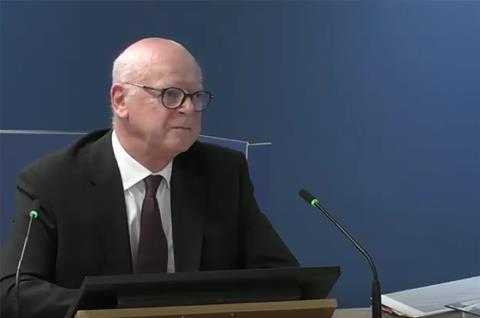 And he laid into the drafters of Approved Documents and product performance certificates as being part of a wider problem.

He was being questioned by inquiry barrister Richard Millett QC on the second day of his evidence to the Grenfell Inquiry into the events leading to the deaths of 72 people in 2017’s fire.

He said there was widespread ignorance of the fire retardance of insulation.

Asked about his own knowledge of fire retardants and PE cores he said he had only found out the difference “by accident”.

Millett read three extracts from the “fire resistance” section in the CWCT (Centre for Window and Cladding Technology) Standard for Systemised Building Envelopes, which Studio E had used in its specification for the Grenfell Tower refurbishment.

Hyett agreed a “reasonably competent architect briefed to design an overclad of a high-rise building” should know those things.

But referring to the third point, he said: “If we look at the profession generally and all of the professions involved – I’m talking about façade engineers, a range of others – in modern buildings of this type, ACM/ACP has been extensively, widely used over a long period of time across a wide range of countries, and we could say that all of us should have been far more focused on this line here.

“So I do not want to suddenly turn on Studio E and say that the weight of that … paragraph should rest entirely on their shoulders. The industry was generally using those products.”

Inquiry chairman Martin Moore-Bick asked whether ACP readily supports combustion. Hyett said it did not but added: “I think it’s difficult to get it to burn, but once it’s burning, it burns with ferocity.” He also agreed that once it’s burning it adds significantly to the fire load.

Moore-Bick asked whether architects were generally aware of that at the time of the Grenfell project. Hyett replied: “We were not.”

Hyett agreed with Millett that the bullet points “should have acted as a prompt or an alarm bell to Studio E just to make sure that the building envelope that it was proceeding to design didn’t readily support combustion, didn’t add significantly to the fire load, and didn’t give off toxic fumes”.

Millett then referred to an earlier edition of the CWCT standard which said: “Rainscreen walls are additionally required to limit the spread of fire in the rainscreen cavity.” Hyett agreed that all architects should know and fully understand that principle.

But he disagreed that a reasonably competent architect should as a result have considered the need for a cladding panel with a fire retardant core.

He explained: “The difference between fire retardants and cores was not as clearly understood at the time as it should have been, and it hasn’t been since, actually.

“There’s going to have to be a root-and-branch review of all of this across the entire industry and across all of the professions involved.

“I came across the difference by accident. So I suppose you could say that, faced with all these documents and wading into them in the most immense detail, maybe it should have become apparent. I learned about it, the difference, by accident, independent actually of this inquiry, but by accident.”

Millett asked whether a reasonably competent architect should go looking for a fire-retardant product after reading all the information.

Hyett said his answer was yes and no. “The problem is we don’t know what to look for. We’re taking so much on trust. We’ve got so much going into a building. It’s not particularly to do with limits of time, although time is crushingly tight; it’s to do with knowing what to look for.

“I think it’s fair to say that the designing part of our industry – I’m making that separation from the manufacturing part, so I’ll actually include contractors in this as well – none of us had any idea that there were such dangerous components being incorporated into a composite panel.”

Elsewhere in his evidence he was critical of most of the consultants working on the Grenfell project.

But he also had harsh words for the people who drafted the Approved Documents (AD) in the Building Regulations and BBA certificates for products.

He said: “I did have a concern around the ADB documents before, but certainly my work for this Inquiry has – and I’m very sorry to say this – taken me through this document in the greatest of detail, and I have been somewhere between disappointed and appalled at times by some of the confusions.”

These included information which he felt was placed under the wrong headings, making it hard to find.

The BBA certificate for the Reynobond rainscreen specified by Studio E did not make it sufficiently clear that it was only pertinent to one colour, he said.

He added: “If it’s important, very, very important to note that different colours will perform in a very different way, then that should be made abundantly clear. I’m sure you’re going to examine whether it was clear enough. I don’t think that this certificate is particularly clear.”