Arconic manager warned colleague that firm was ‘not clean’

An Arconic technical manager described the firm as “not clean” to a sales executive who had been trying to sell the same type of combustible cladding panels used on the Grenfell Tower’s refurbishment, the inquiry into the west London fire has heard.

Thursday’s hearing was shown emails in the summer of 2010 between technical manager Claude Wehrle and sales executive Isabel Moyses in which Wehrle made the warning after the client had insisted on seeing test reports for Arconic’s Reynobond PE cladding product in its cassette form.

Moyses was in talks with the client, Bruno Costa, about the fire safety of the Reynobond PE cassettes, which had failed a 2005 fire test for use on high rise buildings.

The inquiry has already heard how the cassette form of the cladding, which was folded and designed to be hung on rails, had burned “disastrously” in tests and achieved a Euroclass E standard, prohibiting its use on high rise buildings.

Another version, which was designed to be riveted to walls, had performed much better and achieved a Euroclass B rating, which meant that it could be sold on the high rise market. 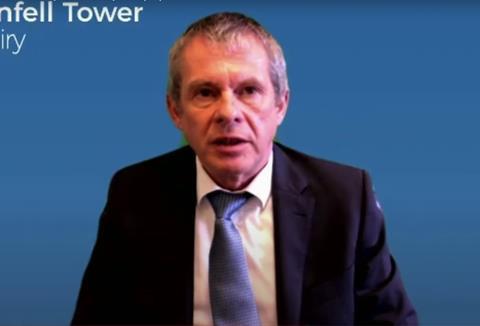 Wehrle then replied to Moyses: ”It’s hard to make a note about this… Because we’re not ’clean’…”

Wehrle then followed up with Costa, sending him a document which claimed that the riveted version  - which had passed the 2005 fire test - was the “worst case” of the product as its combustible polyethylene core was exposed, compared with the cassette version - which had failed its fire test - as its core was “protected”.

Wehrle is one of three Arconic staff who have refused to appear at the inquiry under French legal advice, although he has supplied email exchanges and a witness statement.

Lead counsel to the inquiry Richard Millett has instead been questioning Arconic president Claude Schmidt.

Millett asked Schmidt what test there was that showed the cassette version of the cladding performing better than the riveted version, to which Schmidt admitted: “To my knowledge, there isn’t one.”

Millett then asked: “Do you accept that in telling Mr Costa that rivet was worse than cassette for the purposes of fire performance, Mr Wehrle lied to him?”

The inquiry heard earlier this week that technical staff at Arconic had been “puzzled” by the 2005 test failure of the cassette version - believing that it was a “rogue” result as the firm had a “general view” that it would perform better under testing than the riveted version.

But Schmidt was then shown emails - which have previously been seen by the inquiry - in which Wehrle, referring to the cassette’s fire performance, said: “this shortfall in relation to this standard is something we have to keep as VERY CONFIDENTIAL!!!!”

Millett asked Schmidt if this email showed that Wehrle “knew very well that the [cassette test] was not a rogue,” to which Schmidt agreed.

Millett then asked: “Do you accept that Arconic, through Mr Wehrle, knew that such people − architects, designers, construction professionals − were being misled by the claimed fire certification for cassette?”

The Reynobond cassettes were then tested again in 2011 and downgraded further from Euroclass E to Euroclass F after it failed so dramatically that the test had to be stopped before the end.

Wehrle said in an email: “Oops…The classification of PE cassettes following the test this morning is….F!!!”

Asked if this showed that Wehrle was “making light of this news,” Schmidt replied: “That may be an interpretation, but I’m not certain, no.”

The inquiry has already heard that Arconic had not withdrawn the product from the market because of “cost implications”.

Around 3,000sm2 of the Reynobond PE cassettes were installed on Grenfell Tower as part of its refurbishment, which led to the fire in June 2017 which claimed 72 lives.