Alarmed manager told sales staff who asked to share technical documents: “OH MY LORD!!! Where did you get that from???”

The sales executive at the firm which sold the combustible ACM cassettes used on Grenfell Tower’s ill-fated refurbishment was told by her manager not to share technical documents about the product to customers, the inquiry into the 2017 fire has heard.

Emails shown to the inquiry revealed how Deborah French, the UK sales manager at cladding manufacturer Arconic, was ordered to withhold information from Arup which outlined the differences between two versions of the firm’s Reynobond panels.

While one version of Reynobond, known as FR, had passed the fire test needed for use on buildings above 18m, another, cheaper version, known as PE, had not.

But when French asked if she could forward documents on the two products to Arup, a prospective client, Arconic’s technical manager Claude Wehrle replied: “OH MY LORD!!! Where did you get that from??? For sure you’re NOT allowed to diffuse to the customer those documents.”

Wehrle told French that discussion should instead be limited to different fire safety classifications obtained by the British Board of Agrement (BBA), clarifying that the PE panels, which were 100% organic, were composed of material “that is going to burn in case of a fire”.

Wehrle, who is based in France, is one of three former Arconic staff who have refused to give evidence because of the risk of incriminating themselves under French law.

Reynobond PE, which the inquiry heard was around €4 to €5 per sq m cheaper than Reynobond FR, was the version installed on Grenfell Tower. 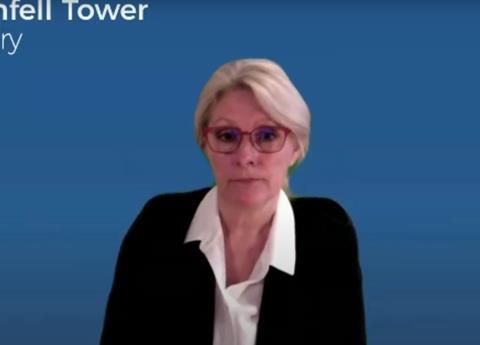 Arconic had obtained a certificate for Reynobond FR from the BBA in 2008 which stated that the product was Class 0, a requirement for use on buildings above 18m - a rating which the PE version did not have.

The tests on which the certificate for FR was based were also carried out on a riveted system, instead of the cassette system which was installed on Grenfell Tower.

But French admitted that she had sent customers who had asked about the two products the BBA certificate for FR, and agreed that it would have given buyers the impression that PE was Class 0.

Asked by counsel to the inquiry Richard Millett QC if she had ever explained to customers if PE would burn, French replied: “I don’t recall specifically explaining that to them. If I had been asked the question I would have explained it.”

She insisted that her technical knowledge was “very limited,” adding: “Working for an organisation like Alcoa [as Arconic was known], it didn’t even enter my head, the question of whether it was or wasn’t suitable. As far as I was concerned, it was a product that had been used, they were a big, known company and therefore it was all perfectly suitable for what I need - for what it needed to do in the UK.”

The inquiry was shown a report from a 2004 fire test of PE in a cassette form, as used on Grenfell, which laboratory staff had to stop after 850 seconds because it burned so fiercely.

French said that she had never been told about the tests’ failure, and told Millett when asked if she knew why she had been “kept in the dark”, that she could not think of a reason.

Phase one of the inquiry found that  the cladding installed on Grenfell Tower was the “primary cause” of the fire which killed 72 people in June 2017.

Millet said the refusal of the witnesses to come forward to give evidence is “unreasonable”.

Arconic refused to disclose documents to the Inquiry and was eventually forced to following a criminal European Investigation Order requested by the Metropolitan Police.