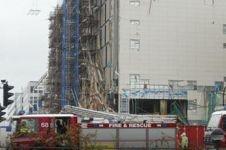 An arrest warrant has been issue without bail, for the director of a company who fled the country following a scaffolding collapse in Milton Keynes, which left one man dead.

The incident occurred in April 2006, when an independent tied perimeter scaffold collapsed on the Jurys Inn hotel in Midsummer Boulevard in Milton Keynes.

John Robinson, a worker on site, was killed as a result of injuries sustained in the collapse, while two others, Mark Robinson and Ivan Peukov, suffered multiple injuries.

McAleer and Rushe Ltd’s case has been adjourned for committal to Crown Court at a date yet to be confirmed.

Lee Smith Carpentry Ltd did not enter a plea. It’s case has been adjourned, along with that of NNM Scaffolding Ltd, until 21 April for committal for trial in Crown Court.

The director of NNM Scaffolding, John King did not attend court. Charges against him have been placed indefinitely. Magistrates have issued an arrest warrant without bail should King return to the UK.