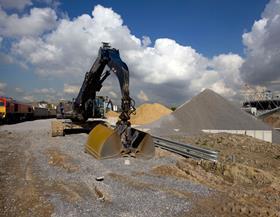 A revolutionary “carbon negative” cement technology developed in the UK has been bought by a mystery Australian firm.

According to the Guardian, the technology was put up for sale when its British developer, Novacem - which has worked with Laing O’Rourke and WSP - was declared insolvent last week.

The rights are understood to have been sold for a six-figure sum. About £4-5m had been pumped into the company by investors and other backers.

“We are satisfied that the buyer will be able to take the invention to the next level,” James Money of London-based insolvency practitioners PKF told the Guardian. “They are committed to making this work.”

The technology involves mixing magnesium oxide with high-purity sand and, according to its backers, could turn the cement industry from one that emits 2bn tonnes of CO2 a year - more than 5% of human CO2 emissions - into one that removes CO2 from the atmosphere.

Novacem, originally a spin-off from Imperial College London when it began in 2007, has recruited firms including Laing O’Rourke and WSP as industrial partners as well as winning financial backing from organisations including the Carbon Trust.

Novacem founder and chairman Stuart Evans claimed the purchase would “make a fortune” for the buyer within a decade.

“Right now, it needs $50-100m in investment but once the technology is established, it will be worth billions,” he said. “You can just do the arithmetic. It is unfortunate that even the best of British venture capitalists find it hard to take on an opportunity like this.”