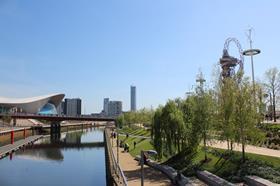 Balfour Beatty has won a contract to build an £102m mixed-use development in Stratford, east London.

The firm, which built the Zaha Hadid-designed aquatics centre (pictured) for the 2012 Olympic Games, will construct the first of seven phases which will see a swathe of Queen Elizabeth Olympic Park developed.

But the full East Wick and Sweetwater development will provide more than 1,500 homes when complete.

The scheme is being developed by East Wick and Sweetwater Projects Phase 1 Ltd.

A joint venture between Balfour Beatty and developer Places for People is providing equity for phase one construction, assisted by a loan from government agency Homes England.

Ground preparation works have started recently, with full construction due to be finished in spring 2021. At its peak, construction will include around 500 people on site.