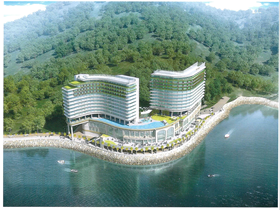 The hotel will be built with two 10-storey blocks on a three-level podium at the Tai Shue Wan bay, with the project including site formation, foundation and building work.

It is expected to be completed in 2021, with a workforce of 700 people employed at the peak of the construction period.

Gammon Construction is headquartered in Hong Kong and is a 50:50 joint venture between Balfour Beatty and Asian-based conglomerate Jardine Matherson, running since 2004.