The company is replacing Hsin Chong Construction on the job 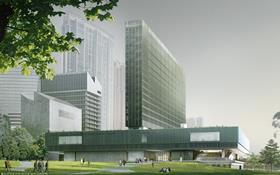 Balfour Beatty’s joint venture in the Far East has been parachuted in to complete a stalled museum job in Hong Kong.

Gammon Construction has been brought in to complete the M+ project, a museum for visual culture, a month after the previous contractor was binned off the job.

The firm has been appointed by the West Kowloon Cultural District Authority (WKCDA) as the management contractor to oversee completion of the scheme.

The WKCDA and the government set up contingency measures 18 months ago, agreeing to pay key subcontractors directly after Hsin Chong Construction ran into financial difficulties.

Thomas Ho, chief executive of Gammon, said: “We are fully committed to embracing the challenges ahead and are confident that we will safely deliver the M+ project to the highest quality within the construction schedule.”

Construction will commence shortly with completion expected by the end of 2019.

The scheme has been designed by Swiss practice Herzog & de Meuron, in joint venture with TFP Farrells and Ove Arup.