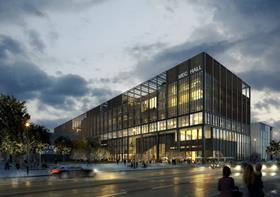 Balfour Beatty topped the contractors table for all work including civils in November, bagging 28 contracts worth a combined £561m.

Kier slipped into second spot, having landed 58 contracts worth £253m. Wates came in at number three, having scored 15 contracts valued at £116m.

Its top three finish came on the back of two contract wins in Malmesbury, Wiltshire, with the £33m Braywick Leisure Centre and £18m Dyson office refurb both being awarded to Wates.

The firm also scored a £22m contract for a new industrial build for energy firm Eon.

The list of the top 10 contractors including civils for the month of November was rounded out by Sir Robert McAlpine, Buckingham Group, Winvic Group and Galliford Try.

Rungs four and five of the table were occupied by Ardmore and Stepnell, while Sir Robert McAlpine claimed sixth spot.

On the cumulative yearly table, Kier also took top spot, having won almost £2.6bn of projects in the year to the end of November. It secured 578 contracts in the 12-month period.

Balfour Beatty is in second spot, with nearly £2.2bn worth of works across 327 contracts.

Multiplex Construction rounded out the top three, having secured about £1.7bn of projects in the year to 30 November, despite locking down just eight contracts.