Reports emerge that contractors are being abused for going to sites

Balfour Beatty has instructed staff to say they are essential workers if they are challenged over why they are travelling in to work, according to a site notice seen by Building.

In a recognition of public hostility towards some parts of the industry, one of the firm’s sites has told its workers and subcontractors to get in touch with bosses if they are stopped and quizzed over why they are out.

It comes ahead of another big week for contractors and the ongoing debate over whether sites should shut or not. The director of one firm who has already closed its sites said: "Our industry will run out of road by the end of the week."

And the boss of another firm, which also shut sites last week, added: "Whilst we could write a risk asseesment and method statement that said we could operate safely and in accordance with social distancing, simply and practically we could not. Nor could we guarantee the welfare of people travelling to and from site."

Last week, Boris Johnson said people should stay at home, adding that people travelling to and from work should only do so "where this is absolutely necessary and cannot be done from home".

In the notice, issued two days after the prime minister's address to the nation last Monday, Balfour Beatty said: "We have been advised by Balfour Beatty directors that if we/you are confronted by authorities regarding why you are travelling, clarify that you work in the construction industry and you are classified as an essential worker.

"Balfour Beatty staff please contact Richard [surname redacted] if you are stopped by the authorities – give them his number."

Last week, pictures of workers crammed into Tube trains caused public alarm over whether the industry was following social distancing rules which state that people must keep 2m apart.

Building understands that key staff at the country’s biggest contractor, which has more than 300 sites in the UK, are also being provided with letters explaining they are required to work if they are questioned.

Public sector clients have also begun issuing workers with documents for them to produce if challenged over why they are out.

One worker on a scheme in the North-west said: “I’ve got a letter allowing me to travel as an essential worker. It’s not from the company but the client, which is a county council.”

The Building Engineering Services Association reported that some workers had been shamed on social media for travelling to work despite the government’s instruction to keep essential sites open.

The trade association is working with industry body Build UK to ensure the general public is more aware of why certain workers are still travelling.

The number of people who have died from the virus yesterday stood at 1,228 with more than 19,500 having tested positive. 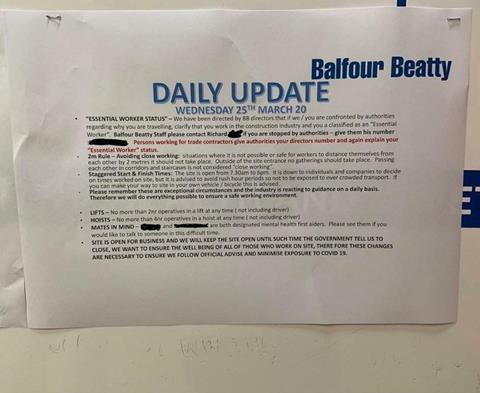