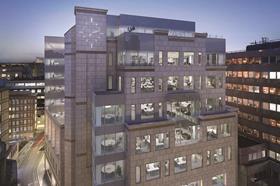 Bam has added another high-profile scheme to its roster of London contracts with a £40m deal to revamp an office block a stone’s throw away from Fleet Street.

The firm is already working on the new Warner Stand - designed by 2012 Olympic stadium architect Populous - at Lord’s cricket ground while other projects include the new Metropolitan Police headquarters building which involves revamping a 1930s building on Victoria Embankment with last year’s Stirling prize-winning architect AHMM.

It is also working on a £100m scheme by London-based Thomas Heatherwick to build a retail complex and piazza at three derelict coal drops at King’s Cross.

The latest deal involves work in the Midtown area of London at 8 Salisbury Square (pictured) with the firm working alongside TP Bennett, the architect behind the remodelling of Sea Containers House on the capital’s South Bank.

The eight-storey building for developers Greycoat and Cheyne Capital also has space for more than 150 bikes along with showers and changing rooms.

Bam’s construction director Andy Mason said: “This is a fabulous building for us to work on. Not only is it a complex re-modelling scheme, but it will be transformed by a fantastic design into some of the most attractive office space London has to offer.”

The latest Deloitte Crane Survey, which was out in November, shows that London office construction rose by 18% in just six months, with 11.1 million ft2 now under construction across 77 schemes.

Leasing of buildings under construction is dominated by technology, media and telecoms, with firms in this sector taking 44% of the space currently being built.