Bam brushes up for £20m makeover of Birmingham’s Selfridges building

All 16,000 of store’s aluminium disks to be cleaned during work

Bam has begun the task of removing and cleaning 16,000 aluminium disks under a £20m deal to revamp the façade of Birmingham’s Selfridges store.

The Future Systems-designed department store was completed more than 17 years ago by Laing O’Rourke and quickly became a city landmark. 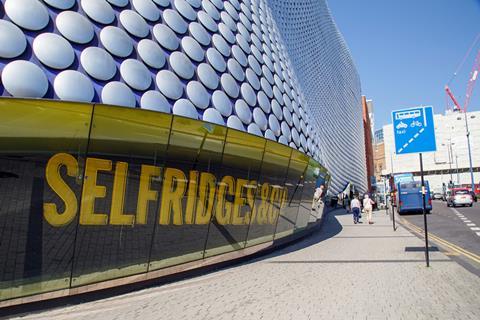 The store has been home to Selfridges for 17 years

Part of the revamped Bullring shopping centre, completed by Sir Robert McAlpine, the store was opened in September 2003 and became the retailer’s third store outside London following those at the Trafford Centre and Exchange Square in Manchester.

As well as cleaning the disks, Bam will add a new layer of insulation with the disks remounted on a repainted blue background.

Bullring owner Hammerson said the store will stay open throughout the work which is expected to complete in 2022. Architect on the scheme is Scott Brownrigg.

Scaffolding is currently going up at the site at night with the hoarding set to be covered in a patterned design drawn up by Birmingham-born fashion designer and artist Osman Yousefzada.

Bam, which built the Harvey Nichols department store in Knightsbridge in 1880 when it was known as Higgs and Hill, is making Birmingham a stronghold for the firm. It is building a new 26-storey tower at 103 Colmore Row while it has carried out work on the first two buildings at Argent’s Paradise development.