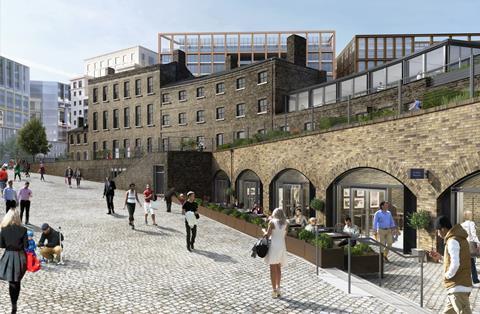 Argent has awarded Bam Construction the contract to refurbish one of the historic buildings at its King’s Cross development into a Jamie Oliver Group pub, restaurant and creative centre.

The contractor will convert the 150-year-old Fish and Coal buildings, which follow the curve of the Regent’s Canal, into modern offices, studios and dining spaces.

Bam has just begun work on-site, using local apprentices from the on-site construction training programme, with completion scheduled for spring 2016. The project will draw on a combined heat and power plant within the wider development as part of its work to target a ‘BREEAM Excellent’ rating.

The scheme represents Bam’s latest involvement at Kings Cross following the company’s recent success in securing a contract on the refurbishment of the German Gymnasium at King’s Cross.

The Fish and Coal buildings were built in 1851 as offices to house clerks employed to monitor the flow of freight through goods yards along the canal from the railways.  The first block was built as part of Lewis Cubitt’s design for the Goods Yard.

The building was gutted following a fire in the 1980s, and floors and roofs have been rebuilt.

Work will be led by Ewen Hunter, who won a construction manager of the year award for transforming King’s Cross’ historic Western Transit Shed into modern office space.

The contractor is also working on three buildings around Pancras Square collectively known as Zone B of the regeneration scheme.

Bam Construction director Mike Donegan said: ‘Bam is very pleased to continue its work on this landmark central London development. Bam is behind something like a dozen structures here.