Bam set for £150m arena next to Manchester City stadium

Scheme being developed by US entertainment specialist Oak View

Bam is set to land the £150m construction contract to build a new 20,000-plus capacity arena in the shadow of Manchester City’s Etihad stadium. 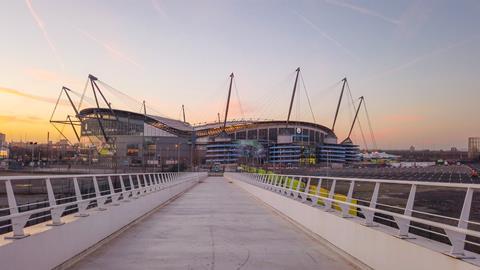 The proposed site is a derelict plot, owned by City Football Group, the holding company of Manchester City, on the approach to the Etihad stadium (pictured), originally built by John Laing.

Known as Project Bradford, after the area where it will be built, the 23,000-seat arena would be a focal point of the Etihad campus and be a rival to the 21,000 capacity Manchester Arena in the city centre which celebrates its 25th anniversary this July.

Oak View, which is behind a new stadium for an NHL ice hockey team in Seattle, has asked Populous to come up with proposals for the venue which is part of a wider masterplan called Eastlands which was updated last year and proposes a sports tech hub for the area as well as being a retail and leisure destination.

In the consultation published last March, the masterplan refers to proposals for “a new large indoor arena with a capacity in excess of 20,000 spectators”.

The Manchester scheme would be Oak View’s first in the UK with most of its sites in the US.

Bam, which declined to comment, completed a £100m training academy, designed by Rafael Vinoly Architects, for the reigning Premier League champions in 2014.

Meanwhile, Laing O’Rourke is believed to have triumphed in the race to build a 55-storey residential block in Salford called One Heritage Tower – beating McAlpine into second place.

The £115m project for client One Heritage Property Developments, a Hong Long-based fund, won planning last month with construction work due to start on site later this year. Architect on the scheme is OMI.