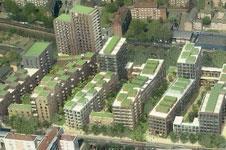 Housebuilder Barratt has released its interim results, recording losses and redundancies as the downturn took hold in the six months to 31 December.

The firm said conditions in the UK-housing market during the six-month period became “intensely difficult”, resulting in a loss before tax of £592.4m.

A sharp contraction in mortgage availability, deterioration of economic conditions and failing confidence levels was blamed for the group’s half-year net debt of £1,433.8m. This was down £227.8m since 30 June 2008.

In a bid to cope with the downturn, Barratt said its number of employees had been reduced by 29% during the period, and was down 38% since the acquisition of Wilson Bowden.

The group said the number of sites it had operated on in the period was down by 8% compared with the same period last year. It added that it expected total sites to fall to an average of approximately 500 for the financial year.

Barratt said it had continued to invest in new land only when contractually committed to do so, and total land spend for the six months to 31 December was £452m lower than last year.

In its outlook for 2009, group chief executive Mark Clare said the year had opened with satisfactory sales. But he added there was still little visibility of when mortgage availability would improve.

“Whilst there still appears to be a strength of demand for new homes, especially against the backdrop of very low production levels, without access to finance this is unlikely to deliver any short-term respite to the industry,” he said.

The group admitted the downturn had led the housebuilding sector to decline beyond that assumed in the firm’s forecasts, and that these conditions could require the group “to revisit its covenants”.

It added that the failure to obtain funding could cast “significant doubt upon the group’s ability to continue as a going concern”.