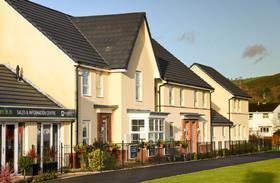 Barratt’s profit has topped £900m as the housebuilder revealed it had beaten a self-imposed target for the use of modern methods of construction.

This morning the firm announced a record annual pre-tax profit of £910m from a turnover of £4.8bn in the year to 30 June.

The housebuilder also revealed that 20% of its homes were built using MMC, a year ahead of schedule.

Over the last three years it has built 5,274 homes using timber frames; the majority of these were in Scotland but it has also increased its use of timber frames across England and Wales.

The group said it also used large format block and light gauge steel frame techniques, adding: “Our new target is to use MMC to build 25% of our homes by 2025.”

In June Barratt bought Oregon, the Selkirk-based timber frame specialist and one of the housebuilder’s principal suppliers of MMC materials.

“We are committed to increasing the number of homes we build using MMC to increase efficiency and to help mitigate the challenges posed by the shortage of skilled workers within the industry,” Barratt said.

The group also said it would introduce new housetype ranges “which are easier and quicker to build” to reduce its need for skilled labour.

Noting the UK’s impending exit from the EU, Barratt said its economic outlook, in the medium-term, would depend on the manner of the departure.

But it said around 90% of its housebuilding materials were manufactured or assembled in the UK and it had fixed price agreements in place for all of these materials to December 2019, and 65% of them to June 2020.

And it added: “We have a substantial net cash balance, a well-capitalised balance sheet, a healthy forward sales position, a continued focus on delivery of operational improvements across our business and an ongoing commitment to deliver high quality homes across the country.”