Battersea work 'to start in months' 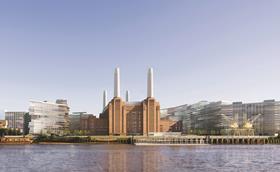 The redevelopment of Battersea Power Station is set to begin later this year, the consortium behind the project has revealed.

Malaysian firms SP Setia and Sime Darby and the Employees Provident Fund successfully bid £400m for the iconic building and its 39-acre site earlier this year.

Announcing the sale completion this week, the consortium said preparatory work for the development would begin over the next four months, with the first ground expected to be broken “in the second half of 2013”.

The first phase of the development will see the construction of some 800 apartments standing above a commercial podium including shops, restaurants, a gym, a pool, a spa, a theatre and office studios.

A new six-acre park next to the River Thames will form the setting for the new buildings and is designed by Ian Simpson Architects and de Rijke Marsh Morgan in accordance with the Rafael Vinoly masterplan for the power station’s redevelopment.

Rob Tincknell, chief executive officer of consortium holding company the Battersea Power Station Development Co said completing the sale of the site was a significant  towards creating a new “town centre” for London.

“The unique UK-Malaysian partnership brings with it the financial strength, expertise and commitment necessary to deliver what is one of the capital’s most important and iconic development projects,” he said.

“With the firm backing of the mayor of London, the London Borough of Wandsworth, central government, English Heritage and the Design Council CABE I am confident that the next few years will bring many more opportunities to celebrate.”