Scheme at Brains site due to start this September

The architect behind London’s Westfield shopping centre has unveiled its masterplan for a site in Cardiff called Central Quay.

The Benoy-designed scheme for developer Rightacres Property, which will sit on land formerly occupied by the SA Brains brewery just south of the Welsh capital’s railway station, will include a waterfront plaza featuring retail outlets, 1,000 apartments and 1.5m sq ft of new office space.

Work on the 2.5m sq ft development by the city’s river Taff is due to begin in September and be completed by June 2020. 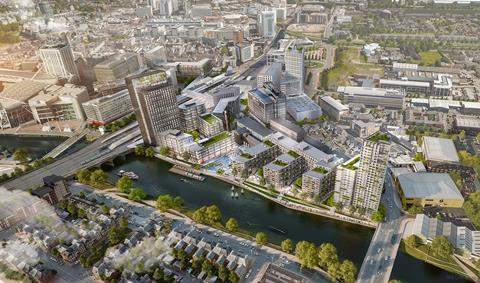 How the development will look

Brains moved to the Central Quay site in 2000 but the group is re-locating to a new facility, Courtney House, in Cardiff’s Pacific Business Park.

How the development will look when it is finished